When it’s your turn, get the Covid-19 vaccine. It’s an act of love, charity and solidarity. 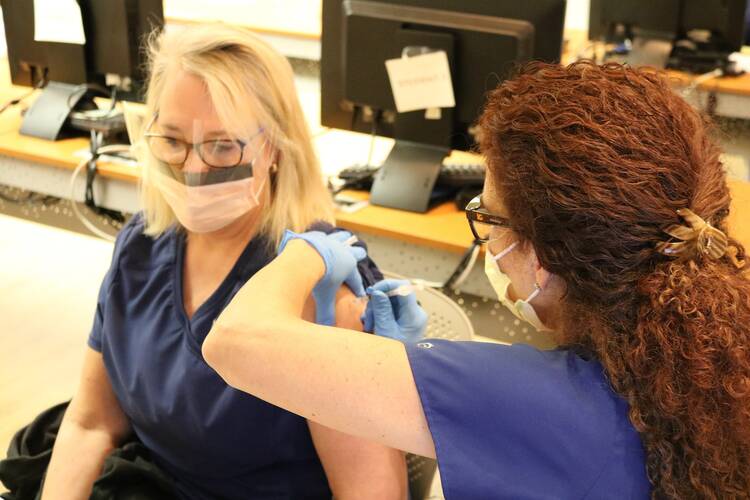 The coronavirus vaccine is finally here. Not enough of it is here yet, and its rollout has not been without confusion and logistical tie-ups, but people are receiving their first doses. Already we see some first providers, medical professionals and politicians sharing photos of themselves being vaccinated.

While it is important for leaders to think through who gets the vaccine and when, the decision facing most Americans is “Should I get the vaccine when it is my turn?” The U.S. Conference of Catholic bishops in its statement last week rightly described getting vaccinated as an “act of charity.” It is also an act of solidarity.

Getting vaccinated not only decreases one’s chances of infecting someone else—something that even otherwise healthy people can easily and unknowingly do—but also sends an important public signal to people who belong to high-risk populations that we are doing our part to keep them safe: health care workers, first responders, the elderly, prisoners and the poor. “Being vaccinated safely against Covid-19,” said the U.S.C.C.B. statement, “should be considered an act of love of our neighbor and part of our moral responsibility for the common good.”

For the vaccine to bring the pandemic to an end, a significant portion of the population must receive it. But large numbers of Americans are reluctant to do so.

Particularly heartening was the news from the Archdiocese of Miami on Wednesday that Archbishop Thomas Wenski became the first U.S. bishop to receive the vaccine. “I wanted to show today, first of all, that we have confidence in the vaccine and that we don’t have any ethical concerns about the vaccine,” Archbishop Wenski said. “Hopefully my stepping up will encourage other people to get the vaccine as it becomes available to them.” (Archbishop Wenski further explained his thinking in an essay for America.) This is especially important because a small number of church leaders have sowed confusion by spreading information contrary to the assurance of the U.S.C.C.B. that vaccines can and should be taken.

Archbishop Wenski’s statement also points to a troubling reality the country faces in the next six months: For the vaccine to bring the pandemic to an end—to allow us to reopen our churches, schools and workplaces—a significant portion of the population must receive it. But large numbers of Americans are reluctant to do so; a recent report from the Pew Research Forum showed that as much as 39 percent of the population still plans to forgo getting vaccinated. But as A. David Paltiel, a professor at the Yale School of Public Health, told The New York Times; “Vaccines don’t save lives. Vaccination programs save lives.”

The Congregation for the Doctrine of the Faith went one step further on Dec. 21, declaring it is morally acceptable to take Covid-19 vaccines whose development or testing regimen includes cell lines originating from aborted fetuses when alternatives are not available. This has also been the position of the Pontifical Academy for Life with regard to the MMR vaccine given to children to prevent mumps, measles and rubella, derived through similar means.

Lurking behind distrust in a vaccine is an increasing lack of trust throughout U.S. society: in each other, in experts, in the news, in institutions.

Further, though the document stated that “practical reason makes evident that vaccination is not, as a rule, a moral obligation and that, therefore, it must be voluntary,” the authors also argued that “from the ethical point of view, the morality of vaccination depends not only on the duty to protect one’s own health, but also on the duty to pursue the common good. In the absence of other means to stop or even prevent the epidemic, the common good may recommend vaccination, especially to protect the weakest and most exposed.”

This is not just a question of political persuasion. A recent survey by the Kaiser Family Foundation found that while more than 40 percent of Republicans surveyed said they were hesitant to get a vaccine, the numbers were almost as high for Black adults, who may be wary because the United States has a long history of medical professionals providing substandard care to Black Americans or even using them for experimental treatments without their consent.

Why all Catholics should get a Covid-19 vaccine
Michael J. O’Loughlin

Archbishop Wenski: Why I got the Covid-19 vaccine
Thomas G. Wenski

For its part, the C.D.F. did not weigh in on “the safety and efficacy of these vaccines, although ethically relevant and necessary.” Distrust of government assurances that the vaccine is safe and will not have side effects is a prominent reason. Lurking behind that distrust is an increasing lack of trust throughout U.S. society: in each other, in experts, in the news, in institutions. This will likely stay with us after this pandemic is over.

So what can we do to help increase confidence in the vaccine—and thereby drive up its effectiveness? While we have an obligation to listen to people’s questions about vaccines and answer them with charity and compassion, it is also true that dispelling misinformation is a spiritual work of mercy.

We will surely benefit if all our prominent national and local leaders—Catholic bishops and priests among them—are crystal clear about the safety of the vaccines while also making clear that receiving it is an act of charity as well as solidarity.