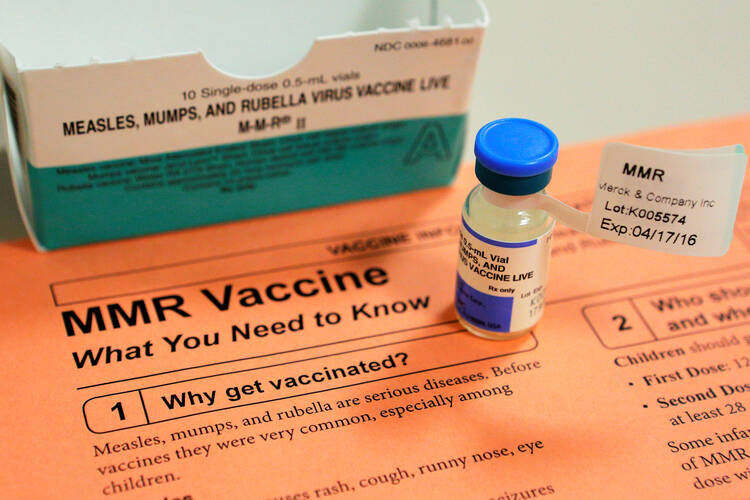 A vial of measles, mumps and rubella vaccine and an information sheet is seen at Boston Children's Hospital Feb. 26, 2015. Catholic parents should vaccinate their children for the good of their children and the community, and they can do so with a "clear conscience" that "the use of such vaccines does not signify some sort of cooperation in voluntary abortion," said the Pontifical Academy for Life. (CNS photo/Brian Snyder, Reuters)

VATICAN CITY (CNS) -- Catholic parents should vaccinate their children for the good of their children and the community, and they can do so with a "clear conscience" that "the use of such vaccines does not signify some sort of cooperation in voluntary abortion," said the Pontifical Academy for Life.

The Academy for Life sent Catholic News Service a working translation of the 2017 document March 20 after U.S. news media reported on a Kentucky Catholic family suing the local health department for measures it took in response to an outbreak of chickenpox at Assumption Academy in Walton, Kentucky, a Catholic K-12 school affiliated with the traditionalist Society of St. Pius X.

The health department, which has posted its letters to parents online, first wrote to the parents of children at the school Feb. 5, informing them of the outbreak and urging them to make sure their children's vaccinations were up to date. With the outbreak continuing, the department sent another letter Feb. 21 canceling sporting and other school events where Assumption students would be in contact with students from other schools.

Then, March 14, the department informed parents of a "concerning increase in the number of infected students at Assumption Academy." Thirty-two students, 13 percent of the student body, had contracted the disease, the letter said.

In response, the health department said that as of March 15, "all students, grades K-12, without proof of vaccination or proof of immunity against varicella virus will not be allowed to attend school until 21 days after the onset of rash for the last ill student or staff member."

Jerome Kunkel, 18, a senior at Assumption, and his family filed a lawsuit March 14 in the Boone County Circuit Court alleging that the health department violated Kunkel's First Amendment rights, according to the Washington Post. The newspaper said they believed using the vaccine would be "immoral, illegal and sinful" according to their Catholic faith.

The Assumption Academy handbook, posted on its website, informs parents that state law requires either vaccination or a written declaration of conscientious objection.

"Schools of the U.S. District of the Society of St. Pius X comply with vaccination policies of local health and education authorities while adhering to moral principles of the Roman Catholic Church," the handbook said.

"The Catholic Church does not oppose vaccinations in principle, but it does consider as morally illicit the development of vaccines from aborted fetal tissues," the handbook continued. "In 2005, the Vatican clarified the proper position of all Catholics on this matter, and the SSPX adheres to that declaration."

The 2005 declaration urged parents to ask their physicians to use vaccines not derived from the cell lines of the fetuses aborted in the 1960s if such vaccines exist and, if they don't, to write to pharmaceutical companies urging the development of alternate vaccines.

Nevertheless, it said, the church affirms it is morally licit to use the vaccines "in the meantime insomuch as is necessary in order to avoid a serious risk not only for one's own children but also, and perhaps more specifically, for the health conditions of the population as a whole, especially for pregnant women."

The Pontifical Academy of Life's updated statement, issued in July 2017 after a World Health Organization study showed a "progressive trend" against vaccinations in Italy, said that "the cell lines currently in use are very distant from the original abortions and no longer imply that bond of moral cooperation indispensable for an ethically negative evaluation of their use."

"The technical characteristics of the production of the vaccines most commonly used in childhood lead us to exclude that there is a morally relevant cooperation between those who use these vaccines today and the practice of voluntary abortion," the statement said.

On the other hand, the academy said, there is a "moral obligation to guarantee the vaccination coverage necessary for the safety of others."

I appreciate anything which has the possibility of sweeping aside propaganda against childhood vaccination.
I am puzzled at the timing of the publication now of something known for at least two years to involved parties such as we Catholic doctors.

Might I just add, the vaccines used to prevent the common killer diseases of children under 5 years of age, children of princes and paupers, the world over do NOT cause autism or epilepsy or wreck their immune systems in any way, shape or form.
This is an authentic truth which has been proven about MMR by competent and trustworthy researchers published 2004, 2005, 2006, 2015 and another this year.