The most essential or most vulnerable: Who should get the coronavirus vaccine first? 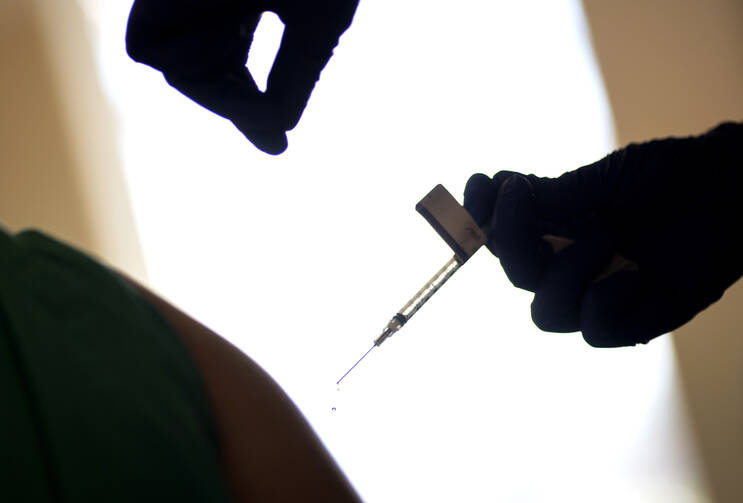 In this Tuesday, Dec. 15, 2020, file photo, a droplet falls from a syringe after a health care worker was injected with the Pfizer-BioNTech COVID-19 vaccine at a hospital in Providence, R.I. (AP Photo/David Goldman, File)

This weekend brings the likely decision of the Centers for Disease Control and Prevention advisory panel about which groups to prioritize in the next phase of Covid-19 vaccine distribution. Thousands of lives hang in the balance.

States and other localities have the final say, but most have followed the C.D.C. guidelines for Phrase 1a. And thank God, because C.D.C.’s Advisory Committee on Immunization Practices made a wonderful recommendation: Prioritize frontline health care workers and residents of nursing homes.

This was wonderful precisely because it put the most vulnerable first: Frontline workers are consistently exposed to the virus, and residents of nursing homes constitute somewhere between 40 and 50 percent of all Covid-related deaths. (This is not counting the thousands of residents who have died of isolation and neglect as the pandemic places additional burdens on nursing homes.) From the perspective of Catholic social doctrine, this was the best possible outcome.

This weekend, a C.D.C. advisory panel will likely decide which group should get the Covid-19 vaccine next. Thousands of lives hang in the balance.

Now comes Phase 1b. There are three main groups that most bioethicists think are in play: 1) essential workers; 2) adults with high-risk medical conditions; and 3) adults over 65.

In deciding how to treat these groups, one might think the A.C.I.P. would again prioritize the most vulnerable. But there are signs something else may be going on. The apparent framework being used for A.C.I.P. to decide priority for Phase 1b makes no reference to anything like the vulnerable.

For reasons that are unclear, A.C.I.P. decided to weigh three main factors equally: 1) science; 2) implementation; and 3) ethics. A document from an A.C.I.P. working group awards up to three points to each group on each of these factors.

Frontline workers are consistently exposed to the virus, and residents of nursing homes constitute somewhere between 40 and 50 percent of all Covid-related deaths.

Suppose it is 5 percent: As we near a daily average of 4,000 deaths, this kind of move would save 200 more lives per day. Over a month, it would save 6,000 more lives. So prioritizing adults over 65 in Phrase 1b seems like a no-brainer.

But A.C.I.P. claims that differences in the “Science” analysis are “minimal” and gives a full three points to all three groups.

The next factor is “Implementation,” and here the panel gives the over-65 group a full three points and the other two only two points each, perhaps those groups are larger and are not covered by existing pharmacy programs..Now comes the third factor: “Ethics.” If you’re thinking that we were already into ethical considerations that’s quite understandable. But the committee mysteriously picks three principles to consider in “Ethics”:

All three principles are weighed equally and, again, all three groups get one to three points for each principle. When it comes to (a), adults over 65 are given the full three points because the vaccine reduces their morbidity and mortality dramatically. Adults with high-risk medical conditions are given only two points because, overall, they are still not as high-risk as adults over 65.

But now something strange happens: Turning to essential workers, instead of focusing on the benefits and harms to that population itself (healthy people under 65 who aren’t frontline health care workers are at low risk for morbidity and mortality), A.C.I.P. switches to thinking about social harms and benefits (i.e., preserving essential services). Significantly, it never considers the social harms and benefits related to the other two groups.

Under “Promote Justice,” the panel rightly points out that essential workers are unable to work from home but then it whiffs on justice questions for the other two categories, merely mentioning that some in each group have limited or no access to care. What about the fundamental injustice of cultural ageism and ableism? What about the painful, systemic isolation of these populations during the pandemic?

They are not considered. This gives essential workers a lead of 6 points to 5 (can you believe we are doing ethics like this?) going into the final ethics principle: “Mitigate health inequalities.”

Essential workers destroy the other two groups in this category, three points to one point each for the other two. A.C.I.P. notes that a disproportionate percentage of racial and ethnic minorities and economically vulnerable people are essential workers. In addition, it notes that even identifying someone as having a medical condition implies that they have access to care. It also emphasizes that racial and ethnic minority groups are under-represented among adults over 65.

This is terrible ethical analysis. I have raised several deep problems already, but here is a very important one: a refusal to apply one’s views consistently.

Racial justice is an essential principle here, but it is only invoked for one group.

Racial justice is an essential principle here, but it is only invoked for one group. A disproportionate percentage of people with high-risk medical conditions are also racial and ethnic minorities as are those in the most vulnerable group: people are over 65 with high-risk conditions). But this is not considered in the analysis. Also, we are given no reason why, in the ethical analysis, all three principles are weighed separately and equally. And we are given no reason why these particular three principles are chosen.

With ethics being the deciding factor, A.C.I.P.’s preliminary analysis awarded essential workers a total of eight points; adults with high-risk medical conditions, six points; and adults 65 and over, seven points.

Of the 14 voting members of A.C.I.P., 12 expressed back in November in a nonbinding vote that they supported this order of priority. Sunday’s vote is likely to reflect this view.

This is an outrage. Essential workers should get significant priority (they should of course go before professors and journalists), but the likely recommendation of the C.D.C. is that young and healthy essential workers will go before the vulnerable elderly with comorbidities.

The likely recommendation of the C.D.C. is that young and healthy essential workers will go before the vulnerable elderly with comorbidities.

The result, from the C.D.C.’s own data, would be that thousands of more people will die.

Throughout this pandemic, I have been an outspoken critic of our practices toward the vulnerable elderly and disabled but have also been hopeful that our mistakes have finally drawn our attention to the fundamental injustices perpetrated by an ageist and ableist throwaway culture, one which hits older and disabled Blacks and Hispanics hardest of all.

We got off to a good start in Phase 1a when we prioritized people living in nursing homes. I am deeply concerned, however, that if the C.D.C. does what it looks like it is going to do, we will have taken two steps back from our one step forward.

Here’s hoping I am wrong. And that, if I am not wrong, states and other local jurisdictions simply ignore the C.D.C. guidance and instead prioritize the most vulnerable.