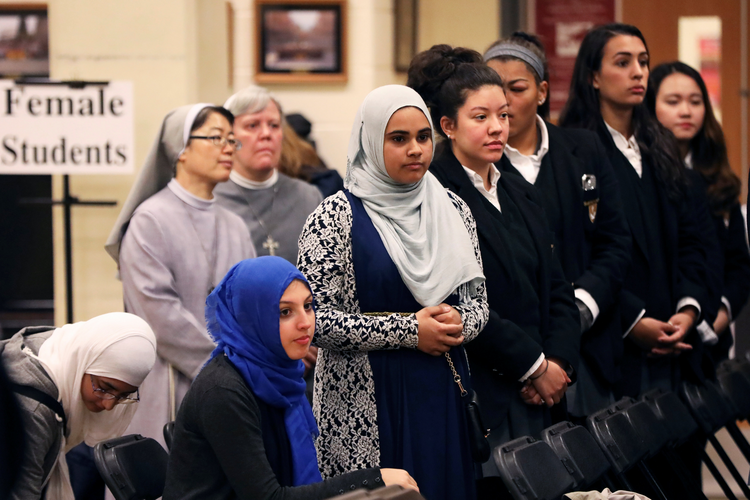 Students from MDQ Academy Islamic School in Brentwood, N.Y., and St. Anthony’s High School in nearby Huntington, N.Y., listen to speakers at an interfaith event at the Catholic school on April 26, 2017. (CNS photo/Shannon Stapleton, Reuters)

“I told my children it is not safe for us here. It is not safe for us until this election is over, and maybe not even after.” My neighbor Widad shook her head and absent-mindedly touched her hijab. “We came here nine years ago to escape from a dictator, and now here we are with a different one. Why not just go back to South Sudan?”

We stood at a street corner in our neighborhood in central Iowa, me pushing a double stroller with my two youngest children inside and she walking with a bicycle pump to rescue her daughter, who was stranded with a flat tire up the road. Two mothers on an election night: one listening to podcasts to keep anxiety at bay, one imploring every person she comes across to vote like the life of her Muslim neighbor depends on it.

Our children go to the same public elementary school, where Widad (not I) has volunteered hundreds of hours. She speaks fluent English and laughs easily. She has buried a child.

We said goodbye, and I walked home wondering, “Where is the outcry over Widad’s religious freedom?”

Widad found refuge in the United States in 2011 and for five years experienced America only as a place of kindness. Upon Donald J. Trump’s election as president in 2016, she says, she began receiving harassment almost overnight. She says she was once followed for miles and miles as she drove her van around town, not daring to go home and fearful of running out of gas.

“I no longer recognize this country that was once so safe for me,” she lamented at our corner. I wanted to reach out and squeeze her hand, but in this time of pandemic we stood six ghostly feet apart. Instead I reminded her that she could come to my family if she ever feels unsafe. She knows this. It doesn’t do much.

We said goodbye, and I walked home wondering, “Where is the outcry over Widad’s religious freedom?” Christians have been in an uproar over their religious freedom, and yet I know of none being threatened while buying apples at the neighborhood grocery store. I don’t know any Catholic children who have cried in the backseat as their mother circles unfamiliar roads trying to lose the truck that is honking and riding her tail. If it is religious freedom that concerns a voter, why tolerate a leader who instituted an executive order restricting travel from certain countries, infamously known as the “Muslim ban,” and is responsible for an Immigration and Customs Enforcement agency that serves pork to detained Muslims and disposes of religious articles, including rosaries, carried by detainees?

I stayed up watching election results and pondering Widad’s words. As I flipped channels, my mind went back to earlier in the day, when I overheard neighborhood boys waiting for my kids to come outside to play. The first grader had read our yard sign aloud to his brother: “In this home we believe Black Lives Matter.” I could hear the strength in his voice even through my office window. I was glad they had noticed the sign. As part of the Black community in America, they had been through a summer of hell that culminated in a public refusal from their president to disavow white supremacy. They deserved to feel safe in their own neighborhood.

The support for President Trump among white Catholics and evangelical Protestants suggests to me that we are woefully out of touch with the experiences of those to whom Jesus was so attentive.

Many Christians have voiced qualms about my yard sign. They object to the Black Lives Matter movement’s association with the idea of “defunding” the police, and they point out that the views on abortion held by B.L.M. organizers are inconsistent with the Christian faith. I have been lectured on these points many times, so I am familiar with all the arguments.

What if these people could hear the comforted voice of a 7-year-old, if they knew these kids and knew how much the words meant to them? Wouldn’t assuring a child of his or her value become the most important thing if that child were standing before you? I believe in Christianity enough to believe that, nine times out of 10, it would. But most white Christians do not have such children standing before us, for we have arranged our lives—our schools, our churches and our cities—to avoid looking into their eyes.

The support for President Trump among white Catholics and evangelical Protestants suggests to me that we are woefully out of touch with the experiences of those to whom Jesus was so attentive: the marginalized, the oppressed and the poor. Despite benevolent language and the occasional grandiose gesture, many Christians do not actually know the people most directly affected by political catchphrases like “trickle-down economics,” “America first” and “law and order.”

We cannot be changed by what we never encounter.

We cannot be changed by what we never encounter. Many Catholics “serve the least of these” through fundraisers for women’s care centers, donating diapers or dropping off meals at homeless shelters—efforts that seek to change things for others without necessarily changing ourselves. The result can be a kind of Christian duty that is sincere but non-transformative.

And so when we go to vote, we cast our ballots in total oblivion to the actual needs and experiences of our marginalized neighbors. The same could be said about the parish activities we suggest, the charitable donations we make and the conversations we have about politics. This may be because we have no proximity to the ones who have been broken by our political and economic systems. We are not hearing their stories, sitting in their living rooms or breaking bread together at a table of reciprocity.

Your Take: Reactions to the 2020 Election
Our readers

I am lucky to have such friendships right here in my neighborhood and have been deeply formed by people like Widad, who challenge me to live out my faith the way Jesus did. Even so, I get it wrong more often than I get it right: hurrying past people I would rather not talk to, failing to take the time to listen to the stories of hurting neighbors or opting for long-distance forms of giving as a replacement for my physical presence. I need a renewed spirit as much as anyone.

Regardless of where we live, we are all accountable to Jesus for the call to solidarity with those whose voices have been drowned out. We must all seek ways to walk with the marginalized, whether by participating in diverse community organizations, inviting those of other faiths to speak to our parish groups or engaging in person-centric volunteer work. The possibilities are endless, but they do require intentionality.

Until all Catholics engage in such long-term relationships with a willingness to have our eyes opened to the experience of another, we have no business claiming that our faith informs our politics. There is no way to determine effective solutions to the problems of people you have never met.

Father Gustavo Gutiérrez, the Peruvian philosopher, once said, “So you say you love the poor? Name them.” I think it is the same question Jesus will ask when we see him face to face.

This article also appeared in print, under the headline “White Catholics suffer from not knowing the marginalized,” in the January 2021, issue. 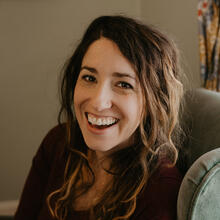 Shannon K. Evans writes the Everyday Ignatian column at Jesuits.org and is the author of Embracing Weakness: The Unlikely Secret to Changing the World and Rewilding Motherhood: Your Path to an Empowered Feminine Spirituality (forthcoming from Brazos Press). Shannon lives with her family in central Iowa.