Why a janitor saved the rosaries confiscated at the Mexican border 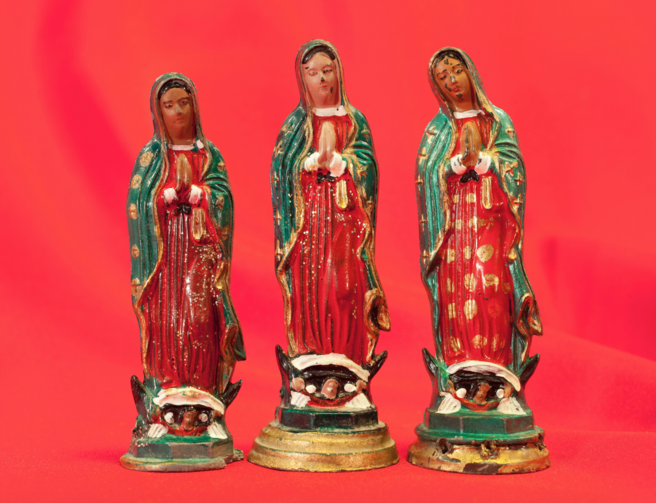 Personal property such as these figurines of Our Lady of Guadalupe are considered "non-essential" and confiscated from detained migrants. (Courtesy of Tom Kiefer)

Tom Kiefer was a part-time janitor for U.S. Customs and Border Protection in Arizona when he saw how much food was going to waste.

Border patrol agents have long confiscated canned goods and other food from people crossing illegally into the United States from Mexico. In the early 2000s, some border patrol agents would donate non-perishable items to a local food bank. But a new regional supervisor, Mr. Kiefer said, had put an end to the practice. A couple of years went by, with the food ending up in landfills, before Mr. Kiefer asked if he could resume the sorting and donating on his own.

“I could not in good conscience let those items remain in the trash.”

When he began rummaging through the bags of trash, Mr. Kiefer was horrified to discover that it contained more than uneaten food and other garbage. He found shoes, wallets, and even rosary beads and bibles.

“I could not in good conscience let those items remain in the trash,” Mr. Kiefer, 59, said in a recent interview with America.

Those personal items were taken from people who had entered the United States illegally and been brought to the processing center in Why, Ariz., deemed by border patrol agents to be “non-essential” or “potentially lethal.” The items were kept for 30 days, giving migrants the chance to retrieve them once they were released or deported, and then they were thrown out. (The Southwest Border Branch Chief at the Customs and Border Protection office provided a statement to America regarding personal property, which said, “All personal property is itemized and stored for the individual until their release or transfer from CBP custody. When individual leaves our custody—we return their property to them.”)

That is where Mr. Kiefer stepped in, salvaging the items from plastic trash bags and storing them until he could figure out how to show them to the world.

“What was important to me was to present these deeply personal items in a respectful and reverent way,” he said. “It took me a good five years before I came across a manner that I thought reflected that.”

A photographer and graphic designer, Mr. Kiefer had lived in Los Angeles for two decades before he packed up in 2001 and moved to Ajo, Ariz., a town of about 4,000 people located 40 miles from the U.S.-Mexico border. He planned to devote his time to photographing landmarks and landscapes of the United States. But to make ends meet, he took the part-time janitorial job.

From 2007 through 2014, Mr. Kiefer collected thousands of personal items that had been taken and discarded. Keys. Shoelaces. Plastic jugs used as canteens for the arduous journey across the scorching desert. He curated the items, photographed them and released a number of images on his website in the summer of 2015, which prompted some attention in the arts world. One popular image was of more than three dozen rosaries that had been confiscated from migrants; it was widely shared on Twitter and the fact-checking site Snopes confirmed its veracity in May.

Mr. Kiefer collected thousands of personal items that had been taken and discarded. Keys. Shoelaces. Plastic jugs used as canteens for the arduous journey across the scorching desert.

He presented them in various ways, some arranged to show the scale of how many people were being detained and others to help humanize what is happening at the border.

“Sometimes it’s appropriate to show a pile of items, like gloves or toothpaste,” Mr. Kiefer said.

But for other items, such as combs, children’s toys and religious artifacts, he “wanted to arrange them in a way that the viewer could connect and identify. It was just a process of discovery, arranging, and coming across ways that were effective.”

The project, called El Sueño Americano (or “The American Dream”), first made a splash when The New Yorker wrote about it early last year. But it entered the public spotlight again in recent weeks, in the furor over a Trump administration policy (now on hold) to separate children from their parents as part of a “zero tolerance” policy toward illegal border crossings.

The photographer sees a thread between stripping migrants of their personal possessions and the policy of breaking up families.

“The whole point was to break these people down, dehumanize them,” he said. “It escalated to taking away your kids. That’s what really spurred this on, the inhumane, evil nature of our policies”

Mr. Kiefer says he was raised Catholic but is now disillusioned by the clergy sexual abuse scandal and the way some church leaders have treated L.G.B.T. people. He says he gets “kind of teary and choked up” by the humanity displayed by Pope Francis. He recalled being moved by the pope’s comments leading up to the 2016 presidential election, in which he called on people to build bridges rather than walls. “The audacity of [Trump] challenging the pope, it was just amazing,” Mr. Kiefer said, using a more colorful word to describe the candidate.

He feels like he’s “not even halfway done” with the project. “There’s so much more to photograph,” including jackets, baseball caps and socks.

Father James Martin: Five things you can do to help immigrants at the border
James Martin, S.J.

In the meantime, he is posting new images on his Instagram page and he will be featured in exhibitions at Arizona State University later this summer and at Michigan’s Saugatuck Center for the Arts this fall.

The items are stored in “safe locations,” and Mr. Kiefer said he consulted with lawyers before making the project public, double checking to make sure he had not broken any laws in taking the items—which he smuggled away in the bags of food he donated, more than 60 tons over five years.

While he has received messages that show “there are definitely people who hate what I’m doing,” Mr. Kiefer said he has received support for his efforts, both at home in Ajo and beyond.

“It’s clear what this project is about,” he said. “The sad dehumanization of these people who we villainize more and more and more.”

Thank you for doing this, Mr. Kiefer. What a wonderful, creative way to restore humanity to our way to view these immigrants.

This is yet another reminder of how this process--separation of families, confiscation of personal property, imprisonment in concentration camps (aka detention facilities)--echoes the treatment of Jews at the hands of the Nazis before implementation of the "Final Solution."

Thanks for a wonderful article about a saintly man preserving the humanity of refugees at our border.

I find it interesting that the usual collection of trolls who show up to bash immigrants are not on this particular thread. That is the value of art - dishonest replies are so evident.

It's really great to see a janitor like Mr. Kiefer take and hold those items. Seeing those items really puts you in those immigrants shoes and kid of makes you feel for their situations.