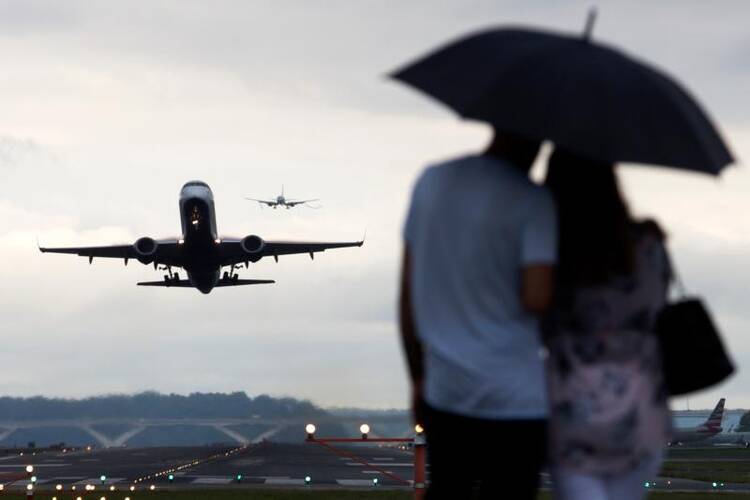 WASHINGTON (CNS) -- In a 5-4 decision June 26, the U.S. Supreme Court upheld President Donald Trump's travel ban on people entering the U.S. from some Muslim-majority countries, saying the president's action was within his power.

The court's much anticipated decision in the last case it heard this term reversed a series of lower court decisions that had struck down the ban as Illegal or unconstitutional.

Chief Justice John Roberts issued the opinion, supported by Justices Anthony Kennedy, Clarence Thomas, Samuel Alito and Neil Gorsuch. It said the president's proclamation is "squarely within the scope of presidential authority" in the Immigration and Nationality Act.

Justice Ruth Bader Ginsburg, said the court's decision "fails to safeguard" this nation's fundamental principle of religious liberty and "leaves undisturbed" a policy that "now masquerades behind a facade of national-security concerns."

Catholic reaction included this tweet from the Sisters of Mercy: "This decision is disappointing and runs counter to this country's founding principles and values. Upholding this travel ban only exacerbates the scapegoating and attacks already directed against vulnerable communities, including immigrants, Muslims and people of color."

And John Gehring, director of Faith and Public Life tweeted: "Imagine a travel ban for people from countries with heavily Catholic populations. Irish Catholic immigrants were once demonized and viewed as a threat to democracy. SCOTUS ruling makes a mockery of our commitment to religious liberty."

When this case was argued before the court April 25, the majority of justices seemed to indicate they would uphold the president's ban.

The challengers to the ban -- Hawaii, several individuals and a Muslim group -- argued that Trump's policy was motivated by an antagonism toward Muslims and that it violated federal immigration law and the U.S. Constitution's prohibition on the government favoring one religion over another.

Trump has said the travel ban is necessary to protect the United States from terrorism by Islamic militants who could enter the U.S. The current version of the directive is indefinite about how long it will be in place and applies to travelers from five countries with predominantly Muslim populations: Iran, Libya, Somalia, Syria and Yemen. It also blocks travelers from non-Muslim countries: North Korea and some Venezuelan government officials and their families.

Pro-life groups have an obligation to call out Trump on immigration
Charles C. Camosy

9 rules for civility from the Catholic tradition
David A. Zubik

The president's first travel ban, issued right after he took office, was blocked by several U.S. courts. A few months later, a second version of the ban was similarly blocked by several lower courts but the Supreme Court voted last December to allow the policy to take effect until it heard oral arguments about it.

They said the ban singles out "populations of six overwhelmingly Muslim nations for sweeping immigration restrictions" that do not exist elsewhere in the world.

The brief said the president's order showed "blatant religious discrimination," which is "repugnant to the Catholic faith, core American values, and the United States Constitution." It also said the Supreme Court should relegate the order "to the dustbin of history, so it will do no further harm."

The Catholic groups said Trump's action posed a major threat to religious liberty and also failed the basic test of religious neutrality. If it stands, they said in the brief, it will prevent countless refugees from escaping persecution and starting a new life in this country with the help of church resettlement agencies.

it is not a ban on religious liberty--it is a ban on religious practice. No matter how much you love Islamic theology and philosophy, it is the practice of that religion by certain people in certain countries (like our "ally" Saudi Arabia) which gives our government pause in allowing any Muslim into the USA for fear that certain "immigrants" mean us harm. You can gnash your teeth and rend your garments, but why don't YOU put your money where your mouth is and sponsor a Muslim immigrant personally and then be personally responsible for any crimes they commit while here. Fair deal? Otherwise you are just full of hot air.

It did not restrict entrance to the largest Muslim nations so how can it be an anti-Muslim ban. Indonesia, India, Pakistan, Bangladesh, Nigeria and Egypt all have more Muslims than Iran, the largest sponsor of terror in the world. There are several non sequiturs in the analysis. It is a Trump hit piece.

I suggest the author read what is in the Quran and Hadith. Islam is not friendly to non Muslim people. Maybe that is the bias she should be interested in.