Your Take: Reactions to the 2020 Election 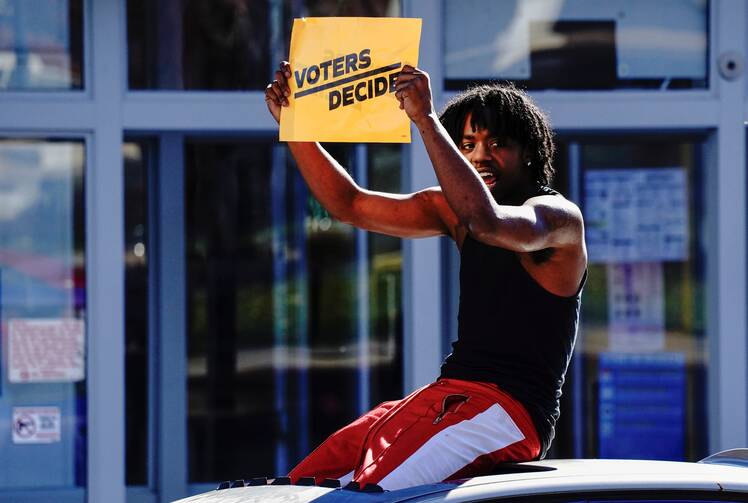 From the beginning of his campaign, former Vice President Joseph R. Biden Jr. framed his quest for the White House as “a battle for the soul of the nation.” Mr. Biden and his supporters won that battle, with voters electing him the nation’s 46th president, according to projections from the Associated Press and other media outlets. Mr. Biden will be just the second Catholic to hold the presidency at a time when the Catholic Church in the United States, like the nation more broadly, remains bitterly divided. The following is a curated selection of online reader comments from our coverage of the election results.

I have noticed that the world seems a much calmer place since Trump lost the presidency. The media is no longer rushing to cover his every droning utterance and belligerent tweet. He is slowly fading away from the spotlight that he so craves. Of course, he will not leave quietly and will stridently seek the attention that his ego demands. He has no cause for worry. He will never be forgotten because the damage he has done to our body politic will remain as his legacy long after he has left office.
L. Kenney

Joe Biden is such an inspiration! He has endured unfathomable tragedy, yet he is unbowed and unbroken. He survived with his faith unshaken and his compassion unscathed. We will soon have a president who attends Mass regularly and who always carries a rosary.
Meggie Graham

I did not vote for Donald Trump in 2016 or this year. As a Catholic, I could not do so in good conscience. As a Catholic, I also could not, in good conscience, vote for Joe Biden this year. Unborn human life is the most dehumanized life in the United States today. It is time for the euphemisms about what abortion is, and what it does to unborn human lives, to stop. If Joe Biden cared nearly as much for the voiceless as he claims, then he would be speaking up for the most voiceless—unborn humans.
Christopher Lake

On Biden’s mandate: In 2016, Trump campaigned against the Democrats, against the media, against big business and against his own party—and won. In the subsequent four years, Trump has been accused of every possible misconduct and crime. Nothing stuck! Normal people would have been crushed multiple times in similar circumstances. Trump increased his popularity. I do not see victory here. I see half the population would rather have someone like Trump than anyone the Democrats (or the Republicans) could offer, even after four years of vicious media campaign. Unless the real problems get addressed, things will only get worse.
Anthony P.

We need to move forward with the goal of reducing the animosity toward those with whom we do not agree politically. One factor that was left out is that a large number of Americans believe news sources that are simply not factual. We cannot work together as a nation if we have propaganda sources swaying the beliefs of half of our nation.
Lisa Weber

To me the first step in healing is a return to the pre-eminence of truth and facts. We can rightfully have different and valid ideas of how problems should be addressed; we face complex issues that have multiple solutions and competing priorities. But we cannot exist in different realities in different worlds of our own beliefs, many based on lies, and build a bridge over that divide. The path to a moderate, respectful, civil political dialogue starts with facts and truth.
Charles Monsen