Mass at racetrack among offerings during Colombia’s monthslong lockdown

Mass at racetrack among offerings during Colombia’s monthslong lockdown 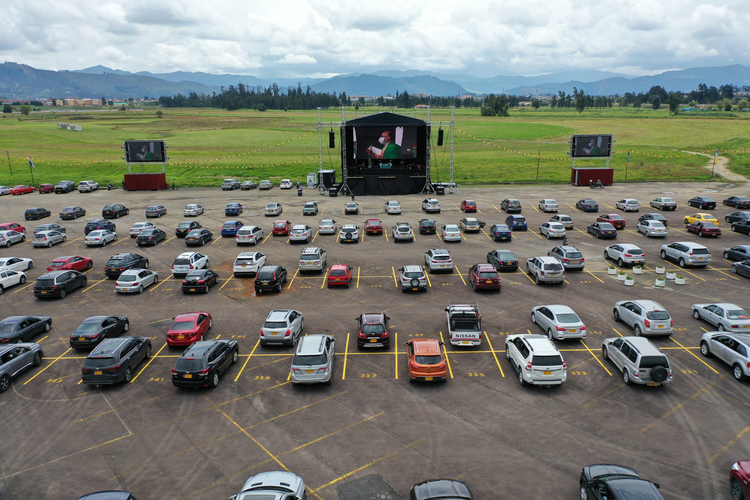 Hundreds of people attand a drive-in Mass near Bogota, Colombia, Aug. 30. Churches have been closed in Colombia's capital city for five months, but recently an events company began to allow drive-in Masses on the parking lot of a former horse racetrack. (CNS photo/Manuel Rueda)

BOGOTA, Colombia (CNS) -- Father Luis Carlos Ayala had been unable to celebrate Mass at his parish for five months. So when an events company suggested he celebrate a "drive-in Mass" on the parking lot of an old horse racetrack, he was quick to accept the invitation.

On Aug. 30, Father Ayala stood on a 20-foot-tall stage used for concerts with his robe and chalice and celebrated Mass with about 200 cars present. For Communion, he descended from the stage and walked through a maze of Renaults, Nissans and Chevrolets, distributing the Eucharist to those who rolled down their windows and turned on their parking lights.

"After being confined for so long, this is something marvelous," said Father Ayala, who leads a parish in Chia, a suburb of Colombia's capital city.

"We've been celebrating Mass online over the past few months," he explained, "but this allows us to get closer to our people."

Since late March, Colombia has taken emergency measures against the coronavirus, and that includes closing churches and banning most indoor gatherings.

It has been one of the longest lockdowns in the world, and it has forced church leaders to look for creative ways to connect with their congregations.

In Bogota, where the local government has kept churches closed for almost six months, drive-in Masses have become one of the latest innovations. But most parishes in the city don't have the space or the equipment required to hold these events, so they have relied largely on Facebook Live and YouTube to stream religious celebrations.

The city has 293 parishes, and close to 90% of them have been using social media to stream Masses, said a spokesman for the Archdiocese of Bogota. Many Colombians say they will continue to stream some services on social media even after churches are allowed to open.

"We have to adapt or we will disappear," said Father Rafael de Brigard, communications director for the archdiocese.

The parish is located across the street from a well-known funeral home and used to have up to six funeral Masses each day. Now it streams these events on social media to friends and relatives of the deceased who are not just in Bogota, but all over the world.

"It's a service that we will keep after the lockdown," said Father de Brigard. "All of us have loved ones in different parts of the world nowadays."

Father Alberto Franco at Bogota's St. Gerard Parish said he also has been offering funeral Masses online. He added that the six-month closure of churches has forced his parish to find "new spaces" to share the faith, like a daily meeting on Zoom, where participants conduct Bible studies or simply ask questions of their priests.

Father Franco said many parishioners are elderly people for whom going to church was also a chance to "meet with friends" and feel less lonely. That kind of a space has not been available for nearly six months, and Father Franco said he has doubts about how many people will want to return to church once restrictions are lifted.

"We are in a moment of uncertainty," Father Franco said. "We don't know how much this lockdown will modify the behavior of people."

Father Franco also said his parish's finances have been affected by the lockdown, because parish members are not used to making donations online. Most were accustomed to donating cash during the collection at Sunday Mass.

At the Las Aguas parish in the center of Bogota, Father Carlo Zardin has taken a different approach to the lockdown. He's skipped Masses on Facebook or YouTube because his parish tends largely to elderly people and poor residents who have limited access to the internet and for whom it is easier to follow services broadcast live on TV.

Instead, the parish has focused on collecting food for its most vulnerable members and on making phone calls to the elderly to check up on them.

"We want them to feel like someone is there, looking out for them," said Father Zardin. "Virtual tools help, but you cannot replace human connections."

As parishes in Bogota continue to adapt to social-distancing measures, the archdiocese is trying to get churches open.

In August, it sent a letter to the city's mayor saying that churches were vital to the "spiritual health" of the population and should be open as long they follow bio-security protocols that include seating people two meters apart and requiring everyone to use face masks.

Churches elsewhere in Colombia opened in the first week of September with these measures.

But Bogota's City Hall argues that it's still too risky to let churches open; the mayor has asked parishes for patience.

Colombia's capital city has a population of 8 million people and has recorded 225,000 coronavirus infections since the pandemic began.