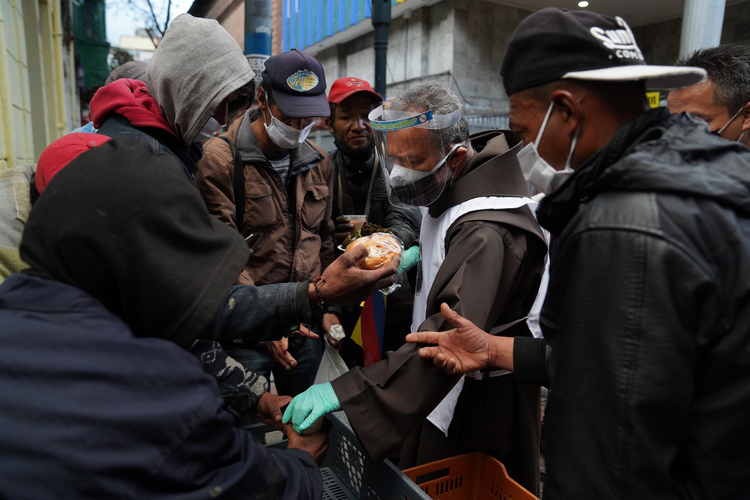 BOGOTA, Colombia (CNS) — The sun was just rising over Bogota, and more than 50 men and women lined up for breakfast on a chilly sidewalk, with their shoulders wrapped in blankets and their faces burned by the cold wind.

After receiving a blessing from Franciscan Father Gabriel Gutierrez, the crowd of homeless people quickly filed by a handful of volunteers, who provided each person with a cup of hot chocolate, a tamale wrapped in plantain leaves and a bag with two pieces of bread.

Father Gabriel, as he is known, tried to keep the line orderly, urging people to wear their face masks and stay a safe distance from each other. He watched for those trying to get seconds before everyone in the group had been fed.

“The streets are not a romantic place” said the priest, who has been providing free meals to the homeless in Colombia’s capital for the past four years. “But this is not a time for us to hide inside our convents or our monasteries.”

Colombia has struggled to contain the coronavirus pandemic. Each day, it reports more than 9,000 new infections and more than 300 people dead from COVID-19.

Social distancing measures and lockdowns, which have been in place for months, have destroyed around 5 million jobs and dragged hundreds of thousands of people into poverty. The nation’s unemployment rate has nearly doubled since the pandemic began and now hovers around 20%.

Homeless people around the country have been hit particularly hard by this situation. In Bogota, Father Gabriel and a group of volunteers are ramping up efforts to help them survive the pandemic.

Their organization, whose name translates roughly to Mercy on the Streets, feeds hundreds of homeless people each day, at four different spots in the city.

“Under normal conditions it’s tough for these people to make an income and get some food,” said the 63-year-old priest. “Now the only food some of them can get are the coffee and bread that we provide each morning.”

A census conducted by Bogota’s city government three years ago found 9,600 homeless people in the city. Father Gabriel said that number now could be closer to 15,000.

Most of these homeless people make a living from recycling trash, the priest said, while some sell coffee on the street, some beg for money and others do random jobs for tips, like guarding parked cars.

But the pandemic has slowed down the economy severely, and now there is less trash to recycle from businesses. The situation has left some homeless people without income.

“I used to watch over shops and I would get some money from that,” said a homeless man who identified himself only as Harry. “Those shops shut down during the pandemic and their owners left, and I’ve been making no money since then.”

Many homeless people in Bogota have addictions, such as crack or alcohol. The pandemic has made it harder for them to manage this dependency.

“Some of the drugs they take have become more expensive,” said Father Gabriel. “For those who can’t afford them, it means going into abstinence, without any sort of therapy or support.”

The city has centers that help homeless people with substance abuse problems, but those centers are only prepared to serve about a third of the current homeless population.

Father Gabriel said he began to work with the homeless in 2016, shortly after hundreds of people were expelled from a crime-ridden street called The Bronx. It operated as a drug market but also provided shelter to homeless people.

“When I arrived in Bogota, I would work like any other priest, helping with religious celebrations,” Father Gabriel said. “But then I found this reality (of homeless people) and it opened my eyes. It reminded me of my vocation of taking the Gospel to the streets.”

The priest and some volunteers from his parish started to set up small meals for the homeless. Slowly more volunteers from universities and from the Franciscan movement joined, now they run an organization that has around 180 volunteers.

The free meals, Father Gabriel said, help them get to know the city’s homeless population and “start a conversation” with them. Once dialogue and trust have been established, the volunteers have been able to help some homeless people enter rehab centers or to get items like recycling carts, with which they can improve their incomes.

Pope Francis “said that the church is like a field hospital,” Father Gabriel said. “We must go out in the streets and embrace these faces that are none other than the faces of God.”