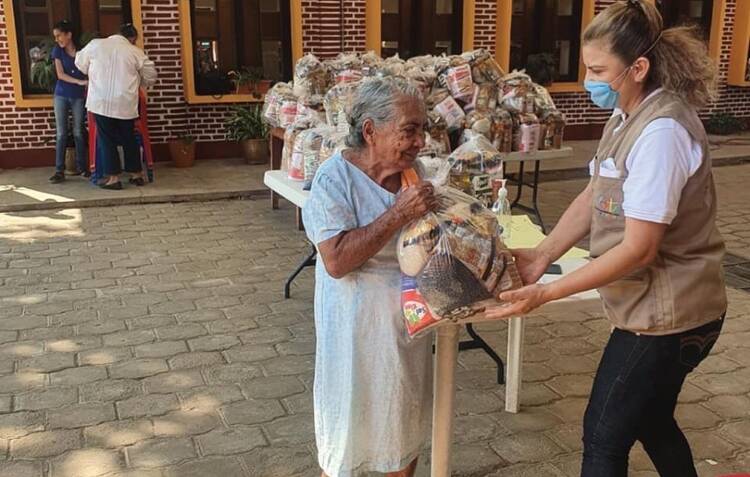 Getting assistance in San Andrés Tuxtla in the state of Veracruz, Mexico (Photo courtesy of Caritas Mexico)

Four months after the Covid-19 crisis began in Latin America, with most churches closed and a fierce recession accelerating across this already impoverished region, some national churches are on the verge of financial collapse.

According to the Rev. Francisco Hernández Rojas, the regional coordinator for Caritas Latin America, as donations dried up most dioceses had enough financial reserves on hand to continue operations for no more than three months. “Those resources were used up between April and June. After that, financial liquidity is over, but the expenses are the same or even greater than before,” he told America.

National churches that face the most difficulties are in those countries that already had serious economic problems before the pandemic started. “Central American countries like Honduras, Nicaragua, El Salvador and Guatemala, and Caribbean nations like Haiti and the Dominican Republic are now very vulnerable,” Father Hernández said.

But no country in the region is having an easy time. Social and economic inequality is a profound problem in Latin America, and even big economies like Brazil and Argentina include vast territories with high poverty, usually in rural or forest regions and on the outskirts of big cities.

With the financial disruption caused by the pandemic, large segments of Latin American populations are more vulnerable than ever. The Economic Commission for Latin America and the Caribbean forecasts a contraction of more than 9 percent in the region’s gross domestic product in 2020.

National churches that face the most difficulties are in those countries that already had serious economic problems before the pandemic started.

“In most countries there are dioceses and parishes that are more well-structured that had already developed platforms to receive online donations. But there are many parishes that are not getting enough donations now,” Father Hernández said, noting that parishes without internet access are particularly likely to be short of resources. In many cases, the technology and socioeconomic gaps are grave enough to create a disastrous imbalance in the whole national church.

That is the case in Colombia. At the end of June, the Most Rev. Luis José Rueda, archbishop of Bogotá, told La Republica that the Colombian church’s “total bankruptcy” could occur in August. Closures among the 80,000 social assistance efforts sponsored by parishes and dioceses—including orphanages, nursing homes, shelters for immigrants, food programs and education enrichment programs—could follow.

“The Colombian Church generates 30,000 jobs. Although our income fell by 90 percent, we’ve been able to keep all workers until now,” said the Rev. Juan Carlos Ramírez, financial director of the Episcopal Conference of Colombia. While some church employees have been able to transition to work from home, he said, many parish-based workers are unable to do their jobs under the lockdown, although they have remained on the payroll so far.

More than half of Colombia’s laborers work in the informal sector. With the social confinement measures imposed by the government since March, many informal workers saw all of their earnings suddenly disappear, and they became incapable of keeping up donations to their parishes.

“Some parishes have buildings that can be partially rented to local businesses. But with the crisis many small and medium companies had to shut down. So all sources of income have been impacted,” Father Ramírez said.

Despite the relative success of diocesan resource sharing in Colombia, if economic conditions do not improve by mid-August, many church programs and social services will have to stop.

He believes that many Catholic schools and nursing homes maintained by Colombian parishes will be severely affected. “The church also operates a number of orphanages for children who lost their families in armed conflicts [during Colombia’s long civil war]. I think all those works are at risk now,” he said.

As soon as the pandemic began, the Colombian Church convened a national conference to plan how it was going to deal with the crisis. “We agreed that our priority was to keep social services running as long as possible. In this sense, it was crucial that parishes and dioceses with more resources should help the poorest ones,” Father Ramírez said.

Despite the relative success of that resource sharing, if economic conditions do not improve by mid-August, many church programs and social services will have to stop, he added.

In Mexico, a donation drought is severely affecting at least half of the country’s dioceses and parishes, according to the Rev. Rogelio Narváez, the executive secretary of Caritas Mexico. “The crisis impacts especially the parishes located in rural regions, such as a great part of Chiapas, Oaxaca, Veracruz and Guerrero. The coastal regions, which depend on tourism, are also facing a critical situation,” he told America.

In May, the Most Rev. Alfonso Miranda, auxiliary bishop of Monterey and secretary-general of the Episcopal Conference of Mexico, declared that the Mexican Church was being forced to apply for loans to maintain its operations.

Many small parishes in Honduras already had to cancel activities and shut down social outreach as donations plummeted. “There’s a great effort on their part to survive, but most of them are facing serious situations.”

Despite its struggles, Caritas Mexico has been able to keep up its humanitarian assistance efforts throughout the country, Father Narváez said. “Over 12 months after the 2017 earthquake, we collected and spent about 3 million euros in social services. Now, in only three months, we already disbursed 1 million euros. Fortunately, people who are able to donate have been continually doing so,” he said.

Money given to Caritas, however, cannot be diverted to support the regular expenses of a parish or a diocese. Even if the church manages to keep providing social services during the Covid-19 crisis, some of its other programs might be unable to survive.

In Guatemala and Honduras, a broad economic emergency has affected both the church’s humanitarian aid and its internal capacity. Both countries have been included in a list of 25 nations that will reach devastating levels of famine within the next few months, according to a survey jointly conducted by the World Food Program and by the Food and Agriculture Organization of the United Nations.

“The pandemic intensified a social crisis that has affected the most vulnerable populations, particularly rural workers. The church has been trying to respond to the situation, but there’s not enough money to deal with so many needs,” Caritas Guatemala’s executive secretary, Mario Arévalo, said.

According to Mr. Arévalo, in Guatemala many priests have had to lay off parish employees or cut their salaries. Meanwhile humanitarian aid continues to reach Guatemala mostly from European Caritas branches. “We made an agreement with Caritas Spain to provide food for 1,800 families for four months. We’re also working on other projects,” Mr. Arévalo said.

The Latin American church’s economic survival hinges on donations from digitally connected households whose breadwinners have managed to keep their jobs or businesses going during the pandemic.

International Catholic organizations are also playing a central role in Honduras, according to Wilfredo Cervantes, a coordinator for Caritas. “There was a reduction in internal donations, but European organizations have been helping us, particularly Caritas Spain and Norway. We still have resources for a couple of months, but after that we don’t know how we’ll keep going on,” he said.

Many small parishes already had to cancel activities and shut down social outreach as donations plummeted. “There’s a great effort on their part to survive, but most of them are facing serious situations,” Mr. Cervantes said.

In Father Hernández’s estimation, the Latin American church’s economic survival hinges on donations from digitally connected households whose breadwinners have managed to keep their jobs or businesses going during the pandemic. “Parishes and dioceses which already had developed online platforms to make donations easier are certainly in a better position now,” he said.

In Argentina, the bishops’ conference has taken steps to keep donors connected. At the beginning of July, the Most Rev. Guillermo Caride, an auxiliary bishop of San Isidro who is in charge of the conference’s commission for sustaining evangelization, initiated a new ecclesial funding program, called F.E.

The program is part of a broad economic reform in the Argentinian church that includes the gradual renouncement of state funding, which recently amounted to $1.8 million a year. Although Argentina is a secular state, since 1853 the government has partially funded the church through tax revenue.

In 2018, then-President Mauricio Macri promoted a congressional debate on the legalization of abortion that raised tensions between his administration and the church. That year, Argentinian bishops agreed to transition the church away from state support, which amounts to about 7 percent of its total budget, although state support of schools and other social services sponsored by the church will continue.

F.E. includes an online platform where churchgoers can easily make donations to the church; it even offers the option of selecting a specific parish or social initiative.

“The Argentinian economic crisis didn’t start with the pandemic. The country had been suffering from recession and inflation for quite some time,” Bishop Caride said. “I believe that the platform is already perceived by many as something that can help parishes to collect donations and sustain their mission,” he said.

With an expected economic G.D.P. reduction of 10.5 percent in 2020, Argentina has experienced a dramatic rise in the demand for food and social assistance.

“There has been a sharp increase in poverty in Argentina, so Caritas had to locate new sources of income,” said Luciano Ojea Quintana, the national director of Caritas Argentina. The organization’s annual fundraiser generated less than half the amount it produced last year.

That will mean Caritas Argentina’s childhood, education, nutrition and drug addiction programs will not be fully funded this year. “We’re very worried about it,” he said. “Many of our social programs are on the verge of being shut.”