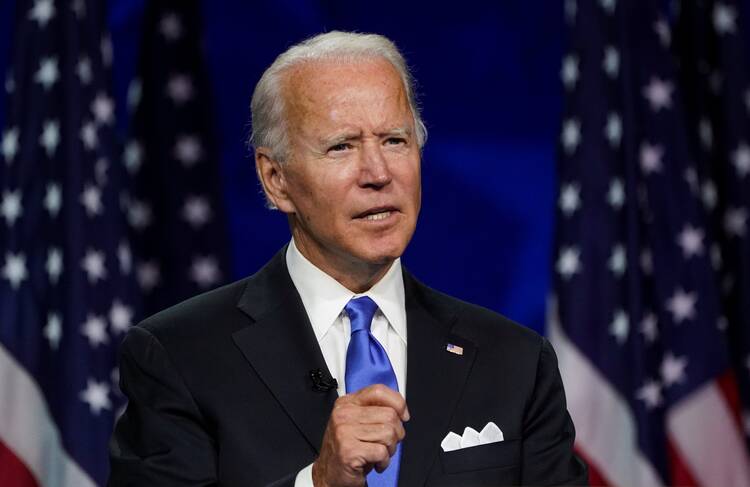 Following a political convention that highlighted former Vice President Joe Biden’s Catholic faith, his campaign this week launched an effort to convince Catholic voters that Mr. Biden embodies their shared values and can bring healing to a divided nation. As part of that effort, the campaign released an ad this week in which Mr. Biden invokes a theme from the papacy of Pope John Paul II and hosted a “Catholics for Biden” virtual campaign event Thursday evening featuring faith and political leaders.

Among those speaking at the kick off event was Sister Simone Campbell, the executive director of the social justice lobbying group Network, who also prayed during the final night of the Democratic convention last month.

“White Catholics have gotten it wrong in the past,” Sister Campbell said, alluding to the majority of white Catholics who supported Mr. Trump in 2016. “Catholics have got to make sure we get it right this time.” To help win over Catholic voters, Network released a voter scorecard and will host a virtual “Nuns on the Bus” tour targeting 16 states. Network’s political arm earlier this year said Catholics should not vote for Mr Trump and it is running social media ads against the president. In a recent email to supporters, Sister Campbell wrote, “Catholics cannot be true to their faith and vote for Donald Trump in November.”

“Catholics have got to make sure we get it right this time.”

Stephen Schneck, a retired professor at the Catholic University of America and a co-chair of former President Barack Obama’s Catholic outreach committee in 2012, took aim at Mr. Trump’s pro-life bona fides during his talk to the roughly 1,100 people who joined the Thursday’s call.

“In his four harrowing years, President Trump has proven himself to be, in my estimation, the least pro-life president in history,” Mr. Schneck said, pointing to the president’s efforts to repeal the Affordable Care Act and his mishandling of the Covid-19 pandemic, which has killed more than 180,000 Americans. “This is not a pro-life president.”

Polls show Catholics are more or less split between Mr. Biden and Mr. Trump, with a majority of white Catholics backing the president. Mr. Biden has faced attacks about how he squares his Catholic faith with his support for abortion rights, including from some bishops and priests as well as from Mr. Trump’s robust Catholic outreach effort.

A priest in South Carolina denied Mr. Biden communion during Mass last October and this week, a bishop from Tennessee questioned the sincerity of Mr. Biden’s faith, a claim that was shared by the head of “Catholics for Trump” on social media. Members of Mr. Trump’s Catholic advisory group, including the influential YouTube personality Taylor Marshall, have dubbed Mr. Biden and his Catholic supporters “fake Catholics.” Speakers at last month’s Republican National Convention also questioned Mr. Biden’s faith, with Lou Holtz, a former football coach at the University of Notre Dame, saying Mr. Biden is “Catholic in name only,” drawing a rebuke from the university.

During the Catholics for Biden launch event, former Representative Tim Huelskamp, a member of Mr. Trump’s Catholic outreach committee, tweeted that U.S. bishops have called abortion the “preeminent” life issue. (U.S. bishops debated whether to use that language about abortion last year, with Cardinal Blase Cupich of Chicago pointing out during the discussion that Pope Francis said a commitment to a range of life issues is “equally sacred” to the fight to protect the unborn.)

Members of Mr. Biden’s Catholic outreach team said they feel confident that Catholics think about more than abortion when they cast votes.

Timothy Shriver, the former head of the Jesuit Volunteer Corps, said in an interview with America that Catholics are not obliged to be single-issue voters. He pointed to issues such as the rights of workers, environmental concerns and access to health and child care.

“The church does not teach that there is only one thing we should care about at the ballot box.”

“Catholic social teaching is broad and dynamic,” he said. “The church does not teach that there is only one thing we should care about at the ballot box.”

Mr. Shriver, 31, said he will be focused on energizing young Catholics leading up to election day, calling the chance to elect Mr. Biden “a transformational opportunity.”

“The story has been that faith voters, particularly church-going Catholics, are old and conservative, but I think we really have the chance to change that narrative,” he said. “Young progressive voters who identify as Catholic don’t have to choose between their faith and their politics.”

Polling data supports the idea that Catholics do not vote solely based on abortion. The Biden campaign’s faith outreach director, Joshua Dickson, told America that Mr. Biden’s team believes that if Catholics consider the former vice president’s character, personal faith and policy proposals, they will ultimately choose him over Mr. Trump.

“We are actively making the case about why the Biden-Harris agenda deeply exhibits and embodies the values that are important to Catholics, such as social justice, loving our neighbors as ourselves, being our brother’s and sister’s keepers and working to ensure everyone has the chance to achieve their God-given potential,” Mr. Dickson said.

“Joe Biden represents all the things that Catholicism teaches me.”

The Biden campaign has also emphasized support from Republicans who are not supporting Mr. Trump’s reelection, highlighting some at the convention and highlighting more than 100 endorsements from Republicans and independents earlier this week. At the Catholics for Biden launch, a Republican venture capitalist praised Mr. Biden, contrasting his values with Mr. Trump’s.

“Joe Biden represents all the things that Catholicism teaches me,” said Peter Kellner, who is also a member of the Knights of Malta, a wealthy, international charitable organization. Mr. Kellner said Mr. Biden’s personal story embodies humility, intellectual curiosity and an interest in social justice. “There is none of that in our president,” he said. (Mr. Kellner sits on the board of America Media.)

Earlier this week, the Biden campaign unveiled a new ad showing Mr. Biden denouncing looting and rioting, in which he accuses the president of fomenting unrest for political gain. In the minute-long ad, drawn from a speech given in Pittsburgh on Aug. 31, Mr. Biden invokes Saint Pope John Paul II.

“Donald Trump is determined to instill fear in America. That is what his entire campaign for the presidency comes down to: fear,” Mr. Biden said. “I believe Americans are stronger than that,” he continued. “I believe we’ll be guided by the words of Pope John Paul II, words drawn from the scriptures: Be not afraid. Be not afraid.”

Correction, Sept. 8: An earlier version of this story misidentified Sister Campbell’s title; she is the executive director of Network. The earlier story also said that the political arm of Network endorsed Mr. Biden for president. A spokesman for the organization wrote in an email to America, “No segment of Network has endorsed in the presidential race, instead we have chosen to express our belief that Catholics cannot vote for Trump. This is the first time we’ve ever been this explicit, but we have not endorsed Biden. The political arm of Network is running ads against Trump, but none in favor of any candidate.”