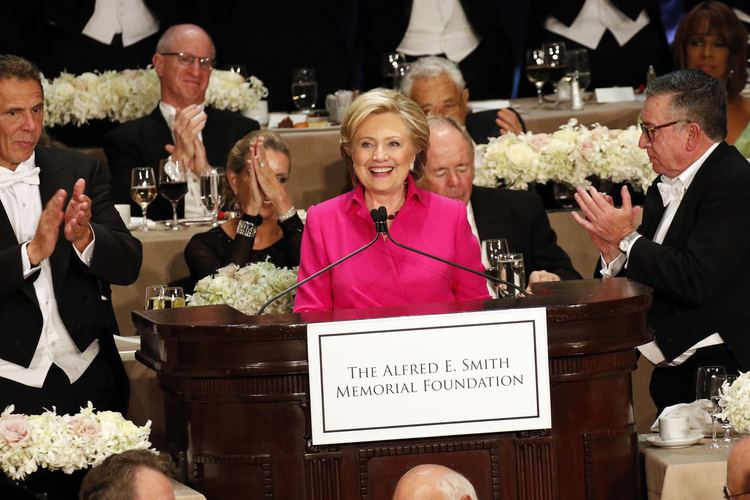 Political junkies sifting through exit polls in the hours and days after November’s election concluded that a narrow majority of Catholics backed Republican Donald J. Trump for president, despite concern from some Catholic leaders, including Pope Francis, over some of the political neophyte’s proposals.

But new data from a nonpartisan political science organization say, “not so fast.”

According to an analysis of American National Election Studies data by a political scientist at Georgetown University’s Center for Applied Research in the Apostolate, Catholic voters narrowly went for Democrat Hillary Clinton, 48 percent to 45 percent. Among Hispanic Catholics, Mrs. Clinton cleaned up handily, winning by more than 50 points.

Mark Gray, the director of polling at CARA who analyzed the A.N.E.S. data for a forthcoming book, said in an interview with America that in his view, the Catholic vote in the 2016 election was more or less split.

“I don’t think we will ever really definitively know,” Mr. Gray said, suggesting that in the end the Catholic vote may have been a “toss up” between the two candidates.

He said that the A.N.E.S. data is more reliable than exit polls because political scientists collect it both before and after the election, and because individuals who work on exit polls often lack expertise in scientific polling. (A 2014 article in the New York Times Upshot blog offers a longer explanation about the limitations of exit polls.)

One area where exit polls generally matched the newly released data is how Catholic voters broke down along age, geography, race and ethnicity.

Geographically, Mr. Trump earned the support of Catholic voters in the Northeast and Midwest, while the two candidates split Catholics in the South. Mrs. Clinton beat out Mr. Trump among Catholics in the West, 64 percent to 25 percent.

Regional Divides: Catholics in the Northeast and Midwest voted for Trump. It was a toss up in the South and Clinton had a huge lead in West. pic.twitter.com/EnbiX42lB3

This breakdown does not necessarily mean that Catholics of all backgrounds in the South and West were more open to Mrs. Clinton. Rather, those regions are home to larger Hispanic Catholic populations.According to a 2014 analysis by the Pew Research Center, 57 percent of Catholics living in the West are Hispanic. In the Northeast and Midwest, by contrast, more than 75 percent of Catholics are non-Hispanic whites.

Mr. Trump fared well among white Catholics, who backed him nationwide 56 percent to 37 percent, according to the A.N.E.S. data. The reverse was true among Hispanic Catholics, the fastest growing demographic in the U.S. church, who backed Mrs. Clinton 74 percent to 19 percent.

Big differences in choices at the ballot box in 2016 among Catholics by race and ethnicity: pic.twitter.com/qP6QSdKRwe

Mr. Gray downplayed the notion of a unified Catholic vote, saying that, like other Americans, Catholics tend to vote based on party preference.

“Catholics, like all other Americans who develop partisanship, gravitate toward the issues within their party that are consistent with the Catholic Church,” he said.

“So if you’re a Democrat and a Catholic, you may strongly emphasize Pope Francis’ statements about climate change or the preferential option for the poor,” he continued. “If you are a Republican and a Catholic, life issues may be the most important to you.”

"Catholics gravitate toward the issues within their party that are consistent with the Catholic Church.”

In the run-up to the election, many Catholic bishops condemned both candidates, albeit for different reasons. Some bishops took issue with Mrs. Clinton’s strong support for abortion rights, while others condemned Mr. Trump’s promise to crack down on immigrants and build a wall along the U.S.-Mexico border.

Even Pope Francis seemed to weigh in on the U.S. election. In February 2016, as Mr. Trump sought the G.O.P. nomination, Francis answered a reporter’s question about the proposed wall by saying that individuals who seek to build walls and not bridges are not Christian.

Then, in a speech just days before the election, the pope, without mentioning the United States explicitly, urged individuals not to succumb to a politics of “fear.”

In the end, Mr. Gray said, he believes loyalty to party ultimately drove many Catholic voters.

“Party comes first for many Catholics and they then try to make that fit within their faith. I don’t mean that in a way that being a Democrat or being a Republican is more important to them than being Catholic,” he said. “But I mean that at the ballot box, partisanship trumps their faith when they make their choice. It should be a difficult choice for any Catholic to vote because no candidate, no party really stands for what the church stands for.”

Appears the only real conclusion on the catholic vote is split like almost every other demographic. Does it really matter a few points on either side? Now how can we unify our diversity? Remember look inside ourselves first.

Looks like another thing the baby boomers messed up, no?

I wonder how the Catholics voted in Pennsylvania, Ohio, Michigan and Wisconsin? These are the Catholics that affected the election.

Are there really that many young Catholics anymore? Hispanic Catholics are in heavily democratic areas so they had little effect except in Florida where Cubans voted Republican because of Obama Cuban policy.

...and I'm apparently part of the 7% of Catholics who thought neither candidate was fit to run the country. But I think what this data says is Catholics think more in terms of their politics than their faith.

Woohoo! I am so looking forward to the day when our civic (and ecclesiastical) leaders reflect the racial, sex, cultural, and ethnic makeup of the American people. Too many white men for way too long.

no surprises here for me. just goes to show that catholic voters mirror the general population. the older and whiter parts vote gop, the younger and non-white vote democratic.

And we are to conclude what? And apply it how in our lives?

1
Pope Francis responds to attacks from EWTN, other church critics: ‘They are the work of the devil.’
Gerard O’Connell
2
Pope Francis: Rigidity in the church ‘is a sin against the patience of God’
Gerard O’Connell
3
Pope Francis’ critics are dividing the church and families—including mine.
Mike Lewis
4
The Problem with Mother Angelica and EWTN (from 1995)
James Martin, S.J.
5
Catholics need better conversations about women’s sexual health. Here are 3 places to start.
Greer Hannan

The Problem with Mother Angelica and EWTN (from 1995)
From 1995: Mother Angelica, devout and well-inten­tioned as she may be, has some big problems.
James Martin, S.J.September 22, 2021

Liberals, Conservatives, Catholics, Indigenous? Nobody won the election in Canada.
While the Catholic Church made headlines all summer—for all the wrong reasons— it did not end up playing a crucial role in this election campaign.
Joe GunnSeptember 21, 2021