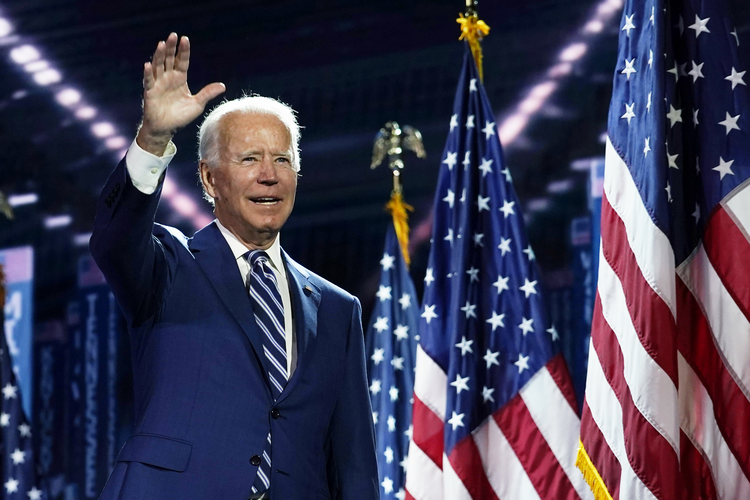 As former Vice President Joe Biden prepared to accept the Democratic nomination for president on Thursday night, his Catholic faith was highlighted to kick off his reintroduction to Americans.

His friend, Senator Chris Coons, Democrat of Delaware, spoke about Mr. Biden’s faith, saying it “is strong and it’s personal and private. For Joe, faith isn’t a prop or political tool.”

If Mr. Biden wins in November, he will be just the second Catholic elected president.

During his acceptance speech, Mr. Biden reiterated his idea that this election is a “battle for the soul of America.” He repeatedly drew upon the themes of darkness and light.

“In this dark moment, I believe we are poised to make great progress again, to find the light once more,” Mr. Biden said. He offered words of consolation to the families and friends of the roughly 170,000 Americans who have died from Covid-19 and urged Americans to fight racism and division.

Ahead of Mr. Biden’s speech, Mr. Coons highlighted Mr. Biden’s faith background. “People, Joe believes, were made in the image of God. Joe learned that from his parents and the nuns and priests right here in Delaware, who taught him and inspired in him a passion for justice,” said Mr. Coons, a Yale Divinity School graduate. He said he has seen firsthand Mr. Biden’s deep faith and compassion, noting how the former vice president consoled him while his father was in hospice care.

Joe's faith is really about our future, about a world with less suffering and more justice, where we're better stewards of creation, where we have a more just immigration policy, and where we call out and confront the original sins of this nation, the sins of slavery and racism.

Mr. Coons, in a nod perhaps to the decreasing religiosity of Democratic voters, said Mr. Biden would be “a president for Americans of all faiths, as well as people of conscience who practice no particular faith.”

“Joe’s faith is really about our future, about a world with less suffering and more justice, where we're better stewards of creation, where we have a more just immigration policy and where we call out and confront the original sins of this nation, the sins of slavery and racism. Joe knows these are central issues in this election. And for him, they're rooted in faith,” Coons said.

“Joe knows that it's faith that sustained so many ordinary Americans who do extraordinary things,” he said.

Americans, Mr. Coons said, “deserve a servant leader who knows the dignity of work; who sees them, respects them, fights for them. We need a president who brings people of all faiths together to tackle our challenges, rebuild our country and restore our humanity. Someone who knows we're called to do justice, love mercy, and walk humbly with our God. Joe Biden will be that president.”

“Oh, divine spirit during the weeks and months ahead, stir our hearts and minds that we might fight for a vision that is worthy of you and your call to honor the dignity of all of your creation,” Sister Campbell said. She asked that God help people be “grounded in community and care for all, especially the most marginalized, a vision that cares for our earth and heals the planet, a vision that ends structural racism, bigotry, and sexism.”

Sister Campbell, who spearheads the “Nuns on the Bus” initiative aimed at educating voters about economic justice, previously spoke at the Democratic National Convention in 2012. Earlier this month she said Catholics “cannot be true to their faith and vote for Donald Trump in November.”

Following Mr. Coons’s speech, a video from a CNN town hall in February showed Mr. Biden explaining his faith as he discussed the 2015 killings of nine Black men and women by a white supremacist at a historically Black church in Charleston. “They forgave him,” Mr. Biden said of the victims’ families. “The ultimate act of Christian charity. They forgave him.”

“Just remember,” she said, “Joe Biden goes to church so regularly that he doesn’t even need tear gas and a bunch of federalized troops to help him get there.”

[Read: Prayers at the D.N.C. by Sr. Simone Campbell and Fr. James Martin]

Following Mr. Biden’s speech, a trio of religious leaders—a rabbi, a priest and an imam—offered prayers, including James Martin, S.J, editor at large of America. “Open our hearts to those most in need,” Father Martin said, before offering a litany of people in need:

The unemployed parent worried about feeding his or her children.
The woman who is underpaid, harassed or abused.
The Black man or woman who fear for their lives.
The immigrant at the border, longing for safety.
The homeless person looking for a meal.
The LGBT teen who is bullied.
The unborn child in the womb.
The inmate on death row.

“Help us to be a nation,” he said, “where every life is sacred, all people are loved, and all are welcome.” Earlier on Thursday, the convention offered a Catholic Mass celebrated via Zoom.

Cardinal Timothy Dolan, the archbishop of New York, will pray at the Republican convention later this month. The cardinal prayed at both parties’s conventions in 2012.

Material from the Associated Press was used in this story. This story has been updated.

Provide feedback on this article
Join the conversation: Login or create an account
Before you can comment, you need to update your profile to include your first and last name, as required in our comments policy. Then reload this page and you'll be set up for commenting. Update your profile
Advertisement
More: Election 2020 / US Politics