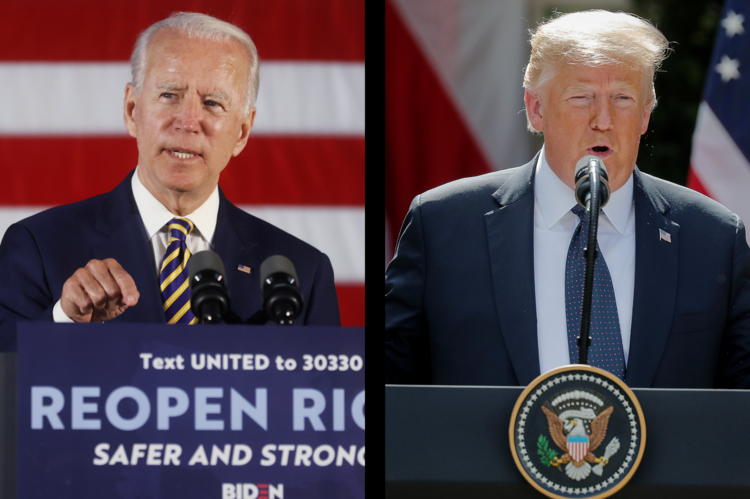 Catholic voters in the United States would narrowly prefer former Vice President Joe Biden over President Donald Trump, the Pew Research Center reported on July 1. When asked who they would vote for or who they are leaning toward if the election were held today, 52 percent of Catholics picked Mr. Biden and 47 percent chose Mr. Trump. But the president performs better among white Catholics, with nearly six in 10, or 57 percent, saying they would vote for him, while 42 percent back Mr. Biden.

“I’m aware that some readers might look at this poll and be surprised that most white Catholic voters, almost six in 10, say they would vote for Trump, or lean toward voting for Trump, if the election were held today,” he said. “That’s why I think it’s important to understand that if you look at the longer term trend in Catholic partisanship, the current result of this individual poll is very much in line with what you might expect given those longer term trends.”

He noted that the long-term data shows Catholics are sharply divided when it comes to politics.

"Catholics as a whole, as has long been the case, are closely divided” in the lead up to the 2020 election, he said.

But broken down between white and Hispanic Catholics, the numbers show a stark divide.

About three-quarters of Hispanic Catholics, 74 percent, disapprove of the president’s job performance.

About three-quarters of Hispanic Catholics, 74 percent, disapprove of the president’s job performance, a view shared by 45 percent of white Catholics.

In April, the president’s approval rating among Catholic adults seemed to rebound a bit, with 52 percent saying they approved of his job performance, compared to 45 percent in January and 41 percent in June.

Mr. Smith said that any single poll offers only a snapshot and that “people who want to understand current trends and public opinion are well advised to consult a wide variety of sources.” He also expressed caution in trying to decipher how a single event might influence public opinion.

Mr. Trump’s use of force to clear protesters near the White House so he could be photographed holding a Bible in front of a historic D.C. church was condemned by some Catholic leaders, leading some observers to wonder how the episode might affect voters come November. But Mr. Smith cautioned against trying to read too much into any particular event and its impact on public opinion.

“It's very difficult to know what impact any particular event might have on public opinion,” he said. “Even if you observe big changes in public opinion before and after some event, it's still hard to know how much of that change is attributable to the specific event.”

Even large events that do alter public opinion, such as the Sept. 11 attacks or the Gulf War, can have limited durability, he said. “The question becomes, how does that play out over time? Is it a longlasting change, or is it something that evaporates more or less quickly?”

The survey, conducted between June 16 and June 22 among 4,708 adults, also asked respondents if they viewed Mr. Trump as a great, good, average, poor or terrible president—and how they thought Mr. Biden would be viewed.

Those numbers were comparable when it came to the views of U.S. Catholics over all, but broken down between white and Hispanic Catholics, the numbers again differ sharply.

Hispanic Catholics, on the other hand, viewed Mr. Trump more negatively and Mr. Biden more positively, with 60 percent describing Mr. Trump as a poor or terrible president and 81 percent saying Mr. Biden would be great, good or average.