Catholics4Biden fight for the Catholic vote in a key battleground state 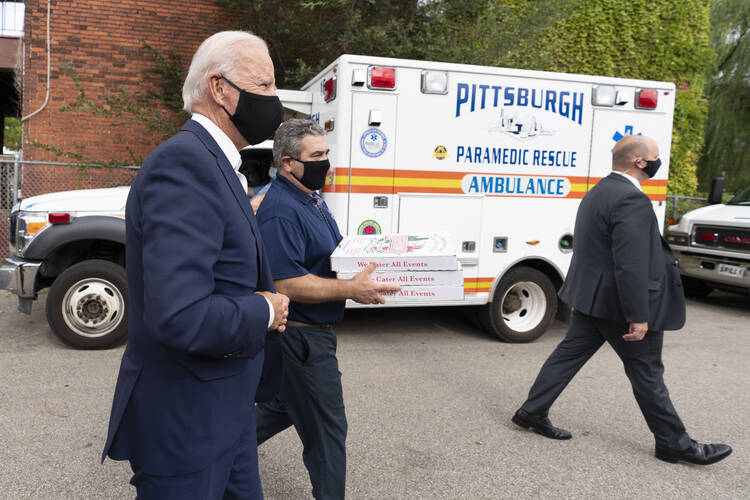 When Joe Biden chose Pittsburgh, Pa., on Aug. 31 to deliver a key address in his presidential campaign, it was in part to target voters like Kevin Hayes.

This summer, Mr. Hayes helped found Pittsburgh Catholics4Biden, a group of 700-some Western Pennsylvania Catholics working to defeat President Donald Trump in a key swing state. (The Biden campaign has scheduled the virtual launch of the national Catholics for Biden for Sept. 3.)

Both parties are making extensive efforts to win the Catholic vote in 2020. And there is logic to chasing Catholic swing voters because they may actually swing. Though other statisticians report that the Catholic vote was evenly split in 2016, according to exit poll data compiled by the Pew Research Center, Catholics voted for Mr. Trump over Hillary Clinton, 52 percent to 45 percent.

In the previous election they swung for Barack Obama over Mitt Romney, 50 percent to 48 percent. Exit polls suggest that Catholics have almost exactly mirrored the overall electorate in every election this century.

Groups like Mr. Hayes’s could prove decisive to a winning Biden coalition, particularly because Mr. Hayes says that the former vice president is generating more enthusiasm among its members than Hillary Clinton did in 2016. Catholics4Biden includes people who voted for President Trump in 2016 as well as, perhaps surprisingly, many who say that the Democratic Party can earn their support by framing its position on abortion in a way they like.

Catholics4Biden includes people who voted for President Trump in 2016 as well as many who say that the Democratic Party can earn their support by framing its position on abortion in a way they like.

“In 2008, Obama and Biden talked about reducing the number of abortions,” which helped them win the Catholic vote, said Mr. Hayes, an architect who lives in the Pittsburgh suburb of Mount Lebanon. “In 2016, the Clinton-Kaine campaign did not make as good of an effort to engage faith communities, nor did they do as well in articulating the need to reduce the number of abortions, as they did emphasizing a woman’s right to choose.”

In his speech on Monday afternoon, Mr. Biden denounced the president for forfeiting “moral leadership” and declared that “all men and women are created equal, and they deserve to be treated equally.”

While the rhetoric addressed the violence in the past week in Kenosha, Wis., the choice of locale was firmly strategic and political. Mr. Trump won Pennsylvania by only 44,292 votes out of over six million cast in 2016.

Along with Arizona, Ohio, Michigan, Wisconsin, Florida and a few others, it is one of the states that may determine the outcome of the 2020 election.

And crucial in all those states: Catholics. In Pennsylvania, for example, they make up a quarter of the electorate.

Catholics are crucial in all battleground states. In Pennsylvania they make up a quarter of the electorate.

Both parties invited prominent Catholics to speak at their national conventions: James Martin, S.J., at the Democratic event and Cardinal Timothy Dolan at the Republican one.

As theologians, bishops and writers argue about whether abortion should determine a Catholic’s vote, the ground battle for turnout and votes is ramping up. The fight is particularly active in Pittsburgh, with its large inheritance of European immigrants and union-supporting Catholic Democrats.

On Sunday night, the day before Mr. Biden spoke, Pittsburgh Catholics4Biden held its first event in a bucolic family park in the suburb of Sewickley, northwest of the city.

The event was co-sponsored with a group called Vote Common Good, an organization of Christians founded in 2018 whose purpose is to “reach out to white evangelicals and Catholics,” said founder Doug Pagitt, an evangelical pastor.

“There’s been a lot of work put into keeping people inside the GOP machine, and we’re trying to put a lot of work into giving them another alternative.”

“There’s been a lot of work put into keeping people inside the GOP machine, and we’re trying to put a lot of work into giving them another alternative.”

He estimates 5 to 15 percent of Trump-supporting Christians are up for grabs. Mr. Pagitt’s tour bus, stationed in the parking lot, will travel with its team of organizers and performers to Pennsylvania, Ohio, Michigan, Wisconsin, North Carolina and Florida during the campaign.

The prospect of reaching out to Catholics was appealing enough to attract as keynote speaker one of the Democratic Party’s rising stars, Rep. Conor Lamb, a Catholic who won in a Trump-supporting Pennsylvania district in 2018 partly with a more moderate stance on abortion and gun rights.

The meeting also got the attention of Betsy Radcliffe, a Trump supporter and a leader in a group of suburban anti-abortion activists. “We heard about this in the last 48 hours,” she said. “We had to come because we believe the Republican platform stands for life, and the Biden-Harris position threatens the sanctity of life.”

Was there any hope for common ground with Catholic Democrats? “Well, we pray for Catholics and people who say they’re Catholics, but they are complicit in the murder of children.”

At the event, Ms. Ratcliffe stood with a cluster of anti-abortion activists praying the rosary and holding up signs and plastic fetuses and babies. (Another way of telling Catholic Republicans and Democrats apart: Few of the anti-abortion protesters wore face masks to reduce the risk of transmitting the coronavirus, while almost everybody in the Pittsburgh Catholics4Biden group did.) Although most of the anti-abortion activists described themselves as single-issue voters, their signs suggested opinions on a range of issues, including opposition to socialism and anger at Kamala Harris’s questioning of a judicial appointee’s membership in the Knights of Columbus.

When Mr. Lamb started speaking, the group heckled him.

“You’re an apostate!” yelled a man.

“Heretic!” the man’s wife added for good measure. Both declined to disclose their names. Mr. Lamb has said he personally opposes abortion while defending its legal availability.

Mr. Pagitt of Vote Common Good walked over to the anti-abortion activists. “We welcome you, but we ask you to be kind and respect our speakers,” he said to the group. It is an approach he has used before, he said, and it worked: The group quieted down.

The speech was well received by a crowd of 50 or so dominated by middle-aged suburban women. “I wanted to come here to see that I’m not alone,” said Karen Florian, a nurse. “I care about abortion, but it’s not the only issue. I care about children in cages and health care too.”

Mr. Lamb said that it was rare for him to be heckled, even by Catholic groups when he visits churches, which he said he does frequently. But it is to be expected as the 2020 campaign ramps up, and it is important to keep cool, he said. “They were saying ‘heretic’,” he said. “Well, people yelled that at Jesus.”