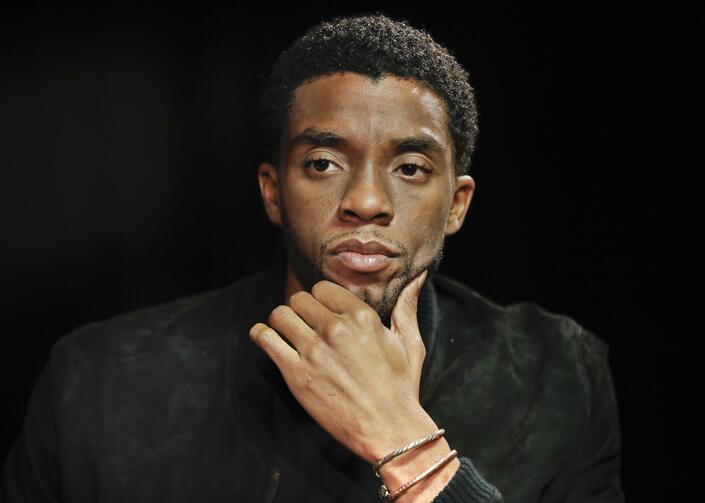 In this Sept. 21, 2017 photo, actor Chadwick Boseman appears at an interview for the film "Marshall," in Washington. Boseman plays Thurgood Marshall, the first African-American Supreme Court Justice, as a young attorney for the NAACP as he battles through on of his career-defining cases. (AP Photo/Pablo Martinez Monsivais)

(RNS) — Chadwick Boseman, who was most known for playing the superhero in the title role of “Black Panther,” was a person of faith from childhood who shared biblical wisdom along the path of his career.

From the impression he left on a pastor of his youth to his own words at the 2018 commencement of Howard University, his alma mater, Boseman demonstrated a Christian life that included service, overcoming stereotypes and a desire to depict strong characters.

“After his family released their statement, I realized that he was living with his illness the entire time I knew him,” said “Black Panther” director Ryan Coogler in a statement.

“Because he was a caretaker, a leader, and a man of faith, dignity and pride, he shielded his collaborators from his suffering. He lived a beautiful life. And he made great art.”

A statement on Boseman’s Twitter account said: “The family thanks you for your love and prayers, and asks that you continue to respect their privacy during this difficult time.”

Here are four faith-related aspects of Boseman’s personal life and acting career that included his role as ruler of the futuristic African kingdom of Wakanda.

He was a baptized Christian.

"He did a lot of positive things within the church and within the community,” recalled Pastor Samuel Neely, who had retired from Welfare Baptist Church in Benton, South Carolina, by 2018, when he was interviewed by a Fox TV station about Boseman before the premiere of “Black Panther.”

“With him singing in the choir, with him working the youth group, he always was doing something, always helping out, always serving. That was his personality."

The church posted a statement on Facebook from its current pastor upon learning of Boseman’s death.

“The Welfare Baptist Church will forever remember Chadwick as a homegrown talented young man who rose to superstardom and made us proud!” said the Rev. Ankoma D. Anderson Sr. “As we mourn his death and grieve alongside his family, we ask that you keep the Boseman and Welfare Church family in your thoughts and prayers! Rest well, Black Panther; REST WELL!”

He saw the role of fate and faith in his career climb.

Speaking at the 2019 ceremony where Denzel Washington received the American Film Institute Life Achievement Award, Boseman recalled the famed actor’s role in helping him get where he did in his career. He recounted the story of how actress Phylicia Rashad asked Washington to help her pay for nine theater students at Howard to attend a summer program at a British drama academy at the University of Oxford.

“As fate would have it, I was one of the students that he paid for,” he said. “An offering from a sage and a king is more than silver and gold. It is a seed of hope, a bud of faith. There is no ‘Black Panther’ without Denzel Washington.”

He spoke of faith in his Howard University commencement address in 2018.

“First, giving honor to the Creator and my ancestors on whose shoulders I stand,” he began.

Later he recounted how he was let go after three days of filming a soap opera — where he was promised a six-figure salary (“more money than I’d ever seen”) — after questioning the background of his character who “seemed to be wrapped up in assumptions about us as Black folk.”

He used his own example to tell the graduates to hold on to principles and standards like ones they had learned at the historically Black school.

“Sometimes you need to feel the pain and sting of defeat to activate the real passion and purpose that God predestined inside of you,” he said to applause. “God says in Jeremiah ‘I know the plans I have for you, plans to prosper you and not to harm you, plans to give you hope and a future.’”

He urged the graduating students to focus on their purpose rather than a specific career or job and to take the harder paths of life.

“When I dared to challenge the system that would relegate us to victims and to stereotypes with no clear historical backgrounds, no hopes or talents, when I questioned that method of portrayal, a different path opened up for me, the path to my destiny,” he said.

“When God has something for you, it doesn’t matter who stands against it. God will move someone that’s holding you back away from a door and put someone there who will open it for you if it’s meant for you.”

'Black Panther' brought churches to the movie theaters, and now a church honors him.

When “Black Panther” opened, members of Black churches were among the first to see the movie. Across the country — from Virginia to Chicago to California — they bought out theaters for screenings and dressed in their favorite African attire to see a superhero who looked like them.

Others, from a Detroit Muslim professor to a New York multicultural congregation, tapped into the movie's messages in hopes they would be especially affirming to young people of a range of religions and races.

Trinity United Church of Christ in Chicago was among the Black churches that hosted screenings of the movie. It also created a "Black Panther Study Guide" that called T’Challa, the lead character Boseman played in the movie, "a king, a leader, a mentor, and a reflective spiritual individual."

On Monday he tweeted, “We honor our brother Chadwick Boseman,” and included a link to a short video produced by his church featuring Moss narrating “Forever,” a poem by Leslé Honoré.

The poem, recited by Moss, begins: “How do we say thank you for the kings and queens you created, the superheroes you inspired, the little Black children who will dream bigger because of you, your representation, your power, your beautiful Black skin. And now we know how strong you really were, stronger than Marvel, stronger than Vibranium, you creating for us your legacy while fighting for your life.”

Adelle Banks - Religion News Service
Provide feedback on this article
Join the conversation: Login or create an account
Before you can comment, you need to update your profile to include your first and last name, as required in our comments policy. Then reload this page and you'll be set up for commenting. Update your profile