Thurgood Marshall gets the superhero treatment in new biopic

Thurgood Marshall gets the superhero treatment in new biopic 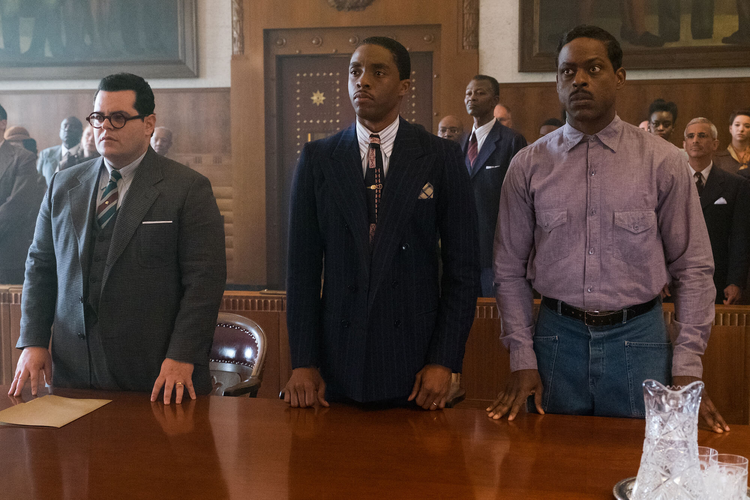 If you amble over to “Marshall” thinking it’s going to be a western, that would wrong. But an adventure story is what the director Reginald Hudlin had in mind with this frisky, fact-based take on the early career of Thurgood Marshall. It is sexy, jazzy, even film-noirish, with heroes, villains and a very dramatic showdown. The last time a Supreme Court justice got this treatment was never.

He might get a shotgun escort when he leaves town, but Thurgood Marshall is the Lone Ranger of civil rights.

It is an invigorating take on a great man, whom most readers probably remember, if they remember him at all, as a sort of jolly figure in black robes, who in the early 1950s had argued the landmark Brown v. Board of Education case before the Supreme Court—a body he would himself join in 1967. But as portrayed by Chadwick Boseman (who was James Brown in “Get on Up” and Jackie Robinson in “42”), Thurgood Marshall is a force of both scholarship and emotion, a brilliant lawyer fueled by anger as much as intelligence. When he hears about the arrest of Joseph Spell (Sterling K. Brown), a “Negro” chauffeur charged with the rape of his white employer (Kate Hudson), he is on the next train north to Bridgeport, Conn.

The filmmakers have a strategy and it works: make a movie about a lofty historical figure that brings him down to earth and turns him human—even a tad superhuman. (Hudlin once wrote the “Black Panther” comics for Marvel.) The hoped-for result is to get people into theaters, and the word of mouth about “Marshall” will probably be about how surprisingly watchable it is.

The filmmakers have a strategy: make a movie about a lofty historical figure that turns him human—even a tad superhuman.

It is not a subtle movie—the characters are drawn very broadly, the acting is big, there is no mistaking the bad guys from the good and the plot points drop like law books. The pace is quick, the music is propulsive, there are historical cameos by Marshall’s Harlem Renaissance pals (Langston Hughes, Zora Neale Hurston), and the movie’s message is more potent now than ever. Filmed during the Obama administration, it is being released when a race-baiting president occupies the White House and any illusion of a post-racial America has been thoroughly smashed. The idea of Thurgood Marshall, never mind a dramatic rendition, seems more necessary than ever.

“Marshall” is many things, including a hero’s journey. But the hero in transit here isn’t Marshall: That would be another figure from real life, Sam Friedman (Josh Gad). An attorney practicing insurance law in Bridgeport, Friedman is approached by Marshall to help in the Joseph Spell case. Not being a member of the Connecticut bar, Marshall needs someone to be his co-counsel. Friedman balks: He is doing very well for himself, winning cases on technicalities and denying a little old lady an insurance payout. (It is indicative of Hudlin’s cheeky style to have the woman be taken from the courtroom in a wheelchair and be rolled painfully into the jury box on her way out the door.) Add to this that the Spell case has not only provoked screaming tabloid headlines, it has increased the ’40s-era anxiety of Friedman’s Jewish brethren, who are even firing their “colored” maids in a kind of mass hysteria. For Friedman to take the case will bring his people unwanted, unfavorable attention. When he and his wife attend their synagogue, you can almost hear the glaring.

But there is also a crucial little scene in that synagogue (in the men’s room, actually) where a fellow congregant named Weisman (Michael Bernardi) slips Friedman some money to help with the case; he supports what Friedman is doing, he just doesn’t want anyone to know. It is a important moment about moral courage.

Friedman and Marshall are both attacked, even physically, for the way they tear down the case against Joseph Spell and in the process expose the hypocrisy of an allegedly liberal North and the corruption of the white ruling class in Connecticut. (Dan Stevens, the former “Downton Abbey” star who plays prosecutor Loren Willis, would be twirling his mustache if he had one.) They represent the longtime if sometimes troubled alliance between blacks and Jews, two groups with more in common than anyone with an interest in fostering political division ever wants to acknowledge.

The protagonist of a piece is usually defined as the character who changes, developing from one self to another. In “Marshall,” that would be Sam Friedman. Thurgood Marshall is certainly a hero, but his view of right and wrong, and who he is, remains the same before and after Joseph Spell. The pre-trial Sam Friedman may not have been a bad person, but he needs Thurgood Marshall, and a cause for good, to motivate his better self. Marshall is an intimidating figure to measure one’s self against. Sam Friedman is someone we all know, and maybe are.