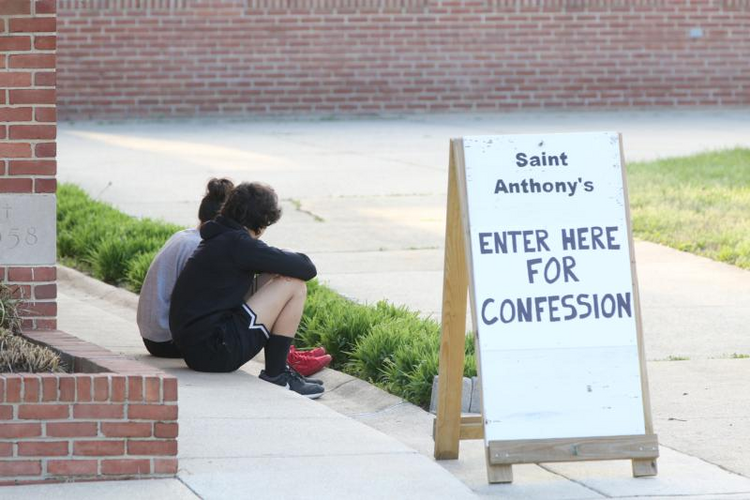 CLEVELAND (CNS) -- Nearly every bishop responding to a survey said the coronavirus pandemic has seriously affected the celebration of the sacraments and rites and sacramental preparation programs in their dioceses.

Confirmations, first Communions, the Rite of Christian Initiation of Adults and other sacramental preparation were the ministries most often cited by the bishops as being affected, according to the survey conducted by the Center for Applied Research in the Apostolate at Georgetown University.

In addition, six out of 10 bishops said that since March when restrictions on ministry and Mass attendance were put in place, the morale of priests, lay ecclesial ministers, deacons and chancery staff has been at least somewhat affected, according to the findings released July 9.

Nearly every bishop said the coronavirus pandemic has seriously affected the celebration of the sacraments and rites and sacramental preparation programs in their dioceses.

Titled "Ministry in the Midst of Pandemic," the survey asked bishops about six areas of concern that have arisen in dioceses since the pandemic caused public Masses to be suspended and the celebration of sacraments to be restricted or postponed.

The questions focused on the pandemic's effect on dioceses; special pastoral provisions issued by dioceses; financial concerns raised by the pandemic; actions to address a diocese's financial health; the pandemic effect's on parish assessments; and diocesan technological assistance to schools and parishes.

CARA staff members mailed the survey to bishops in 177 archdioceses and dioceses and 20 eparchies May 18 and followed up with a mailing June 8 to those who did not respond. Overall, 116 bishops, 59%, had responded by the release of the report. About 60% of diocesan bishops responded and about 50% of eparchial bishops responded, the report's authors said.

CARA officials said the results of the survey were likely affected by whether a bishop responded while his diocese or eparchy was in total lockdown or as restrictions began to be lifted.

When it came to specific sacraments, 99% of bishops said confirmation had been very much or somewhat affected; 99% said that about first Communion; 92%, about the Rite of Christian Initiation of Adults process; and 94%, about other sacramental preparation programs.

The survey found the morale of church staff members has been very much or somewhat affected.

Similar numbers of respondents said the celebration of marriages (98%), baptisms (91%) and funerals (93%) also had been at least somewhat affected.

Meanwhile, 54% of bishops said the ability of Catholic Charities to serve people in need had been impacted as well.

Jonathan Wiggins, director of parish surveys at CARA, told Catholic News Service the survey offers an early look at how the pandemic is affecting church life.

"What really strikes me is that this is so much a work in progress because parishes are not back up to any kind of normalcy in terms of Mass attendance, sacraments, giving or anything that would characterize regular Catholic life," Wiggins said.

"This is just a couple months in and we don't know what the long-term effects will be on dioceses and parishes," he added.

A similar survey of parish pastors by CARA researchers is underway, Wiggins added.

The survey of bishops offered them the opportunity to provide brief written answers to questions about pastoral provisions they may have implemented, such as the dispensation to attend weekly Mass, instructions on the celebration of the sacraments such as baptism and marriage, and directives to comply with state and local government orders.

Those responses were not quantified in the CARA report. But it included comments from bishops describing the steps they took as the pandemic led to massive church, school and business lockdowns in March and then eased in May and June.

Some bishops said they offered updates as often as weekly with regard to liturgies, finances, how parishioners can contribute to their parish during closures, and how parishes could reopen for public Masses and reception of the sacraments.

Responding bishops said they instructed parishes to follow state guidelines when public Masses resumed and stressed the importance of practicing social distancing and celebrating Mass in open spaces such as parking lots.

Regarding finances, bishops said they were concerned that the loss of income from Sunday collections would have a devastating impact on parishes. They also said they worried about the effect of increased unemployment on parishioners and the impact on family life.

With the revenue losses, some bishops said that parish and diocesan staffs may have to be reduced.

To help parishes manage finances, dioceses have offered assistance in a variety of ways.

Another concern bishops expressed focused on whether people will return to Sunday Mass after a long absence. They said without the return of parishioners, the financial outlook for church entities was grim.

Bishops said they expect their diocese to realize long-term economic consequences, especially if annual collections to support various ministries are not taken. One bishop wrote that "we might have to let employees go. Won't be able to carry out the vision of the new evangelization and catechesis including faith formation programs."

The financial solvency of Catholic schools also was on the minds of bishops. Some respondents said they feared that high unemployment would result in parents who could no longer be able to afford school tuition, causing enrollment to drop and leading to school closings.

Such closings already are occurring, according to the National Catholic Educational Association, with more than 100 schools having announced they have closed since the end of the academic year in the spring.

A significant majority of dioceses also stepped up to offer technological assistance to help parishes livestream Mass and to enable schools to transition to online learning in a short timeframe.

Six in 10 bishops, 62%, said their diocese was very much involved in helping parishes with Masses online while another 22% said they were somewhat involved. Ten percent said they helped a little and 6% said they did not help.

Schools received plenty of support in their transition to online learning as 79% of bishops responded that their dioceses helped very much. Only 12% helped somewhat, 4% a little and 5% not at all.

Technology also allowed bishops to remain in contact with their diocesan staffs as they arranged virtual meetings and shared communication online. One bishop said he recorded videos of support for hospital workers and another video for laypeople on the delay in receiving of sacraments.

Editor's Note: A summary of the report from the Center for Applied Research and the Apostolate is online at http://nineteensixty-four.blogspot.com/2020/07/ministry-in-midst-of-pandemic-survey-of.html. It also links to the full report.