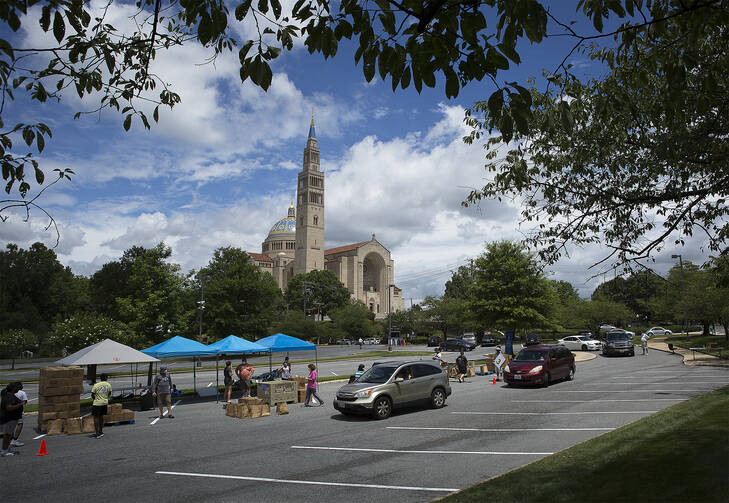 Catholic Charities staff and volunteers in the Archdiocese of Washington distribute 500 grocery boxes and 500 family meals in the parking lot of the Basilica of the National Shrine of the Immaculate Conception July 10, 2020, during the coronavirus pandemic. (CNS photo/Tyler Orsburn)

An investigation conducted by The Associated Press reported on July 10 that as the coronavirus pandemic created an unprecedented economic calamity across the nation, the ministries, parishes, schools and chanceries of the U.S. Catholic Church received more than $1.4 billion in loans from the Small Business Administration through the Paycheck Protection Program. That forgivable loan program was created by Congress as part of the Coronavirus Aid, Relief, and Economic Security Act passed in March.

According to the report, Congress had made religious entities eligible to receive federal S.B.A. assistance for the first time as the pandemic lockdown threatened to cut millions of employees off from their weekly paychecks. The A.P. report raised hackles among church critics and concerns among the faithful.

This evening the U.S. Conference of Catholic Bishops issued a response.

Archbishop Paul S. Coakley of Oklahoma City, the chair of the bishops’ Committee on Domestic Justice and Human Development, reminded critics in a statement: “The Paycheck Protection Program was designed to protect the jobs of Americans from all walks of life, regardless of whether they work for for-profit or non-profit employers, faith-based or secular” and that the U.S. Catholic Church “is the largest non-governmental supplier of social services in the United States.”

“Each year, our parishes, schools and ministries serve millions of people in need, regardless of race, ethnicity or religion,” Archbishop Coakley said. “The novel coronavirus only intensified the needs of the people we serve and the demand for our ministries. The loans we applied for enabled our essential ministries to continue to function in a time of national emergency.

U.S. bishops: “The Paycheck Protection Program was designed to protect the jobs of Americans from all walks of life, regardless of whether they work for for-profit or non-profit employers, faith-based or secular.”

“In addition, shutdown orders and economic fallout associated with the virus have affected everyone, including the thousands of Catholic ministries—churches, schools, healthcare and social services—that employ about 1 million people in the United States,” Archbishop Coakley said. “These loans have been an essential lifeline to keep hundreds of thousands of employees on payroll, ensure families maintain their health insurance, and enable lay workers to continue serving their brothers and sisters during this crisis.

“Despite all of this, more than 100 Catholic schools have announced that they plan to close, with hundreds more facing an uncertain future,” the archbishop said, adding that “businesses, hospitals, schools, and churches all across the country are facing many of the exact same problems.”

“We will continue advocating for everyone negatively affected by this terrible pandemic,” he said, “praying for all the sick, for all who have died and are in mourning, and especially the poor and vulnerable at this time of great need.”

The report noted that houses of worship and faith-based organizations that promote religious beliefs are not usually eligible for money from the S.B.A. “But as the economy plummeted and jobless rates soared, Congress let faith groups and other nonprofits tap into the Paycheck Protection Program, a $659 billion fund created to keep Main Street open and Americans employed.”

Under the program’s terms, loans will be forgiven if employers direct at least 60 percent of the federal money received toward employee paychecks. The reminder can be applied to rent and utilities for up to 24 weeks of the lockdown period they experienced. (Full disclosure: America Media also participated in this federal relief program, receiving a loan of $314,000. Read more about it here.)

According to the report, religious groups persuaded Congress and the Trump administration to free them from a rule that typically disqualifies an S.B.A. applicant with more than 500 workers. A.P. reporters argued that without this “preferential treatment,” many Catholic dioceses would have been ineligible “because—between their head offices, parishes and other affiliates—their employees exceed the 500-person cap.”

James Martin, S.J.: “Should a teacher in a Catholic school in the inner city or an employee at a social service agency run by the church, people who had nothing to do with the abuse crisis, not receive aid during the pandemic?”

According to the report, the “church’s haul” may have reached or exceeded $3.5 billion, “making a global religious institution with more than a billion followers among the biggest winners in the U.S. government’s pandemic relief efforts.” The report also noted that some of the loans were paid out to dioceses that had been obligated to make large settlements in response to the sexual abuse crisis.

On social media James Martin, S.J., America’s editor at large, noted that the A.P. assessment suggested a misunderstanding of how the church in the United States actually operates. Commenting on Twitter, he called the report “highly misleading.”

“The ‘Catholic Church’ didn't ‘cash in,’ to quote one of the subheads in this report,” he said. “There are hundreds of individual Catholic dioceses, parishes, schools and social service agencies that care for the poor, which applied for funds often for employees whose low-paying jobs were in jeopardy, like other Americans.

“Other churches, non-profits and charitable organizations applied for funds as well,” Father Martin said. “Yes, most Catholic dioceses have (rightly) paid out millions to the victims of the crimes of sex abuse, which is one reason why individual parishes, schools and social service agencies were even harder hit during the pandemic.

“No Sunday Masses means no weekly collections in already poor dioceses and parishes that themselves care for the indigent as part of their ministry,” he said. “But the idea that the ‘Catholic Church’ is now ‘cashing in’ is false. Should a teacher in a Catholic school in the inner city or an employee at a social service agency run by the church, people who had nothing to do with the abuse crisis, not receive aid during the pandemic?

“Which employees should these parishes, schools and social service agencies have laid off rather than accepting these government funds?” Father Martin asked.

According to the A.P. report, the program was open to all religious groups, “and many took advantage. Evangelical advisers to President Donald Trump, including his White House spiritual czar, Paula White-Cain, also received loans.”

The law that created the Paycheck Protection Program let nonprofits participate, as long as they abided by the S.B.A.’s “affiliation rule.” The rule typically says that only businesses with fewer than 500 employees, including all subsidiaries, are eligible.

Lobbying by the church helped religious organizations get an exception.

The Catholic News Service reported that the bishops’ conference and several major Catholic nonprofit agencies worked throughout the week of March 30 to ensure that the “unique nature of the entities would not make them ineligible for the program” because of how the S.B.A. defines a “small” business. Those conversations came just days after President Trump signed the $2 trillion CARE Act, which included the program.

A spokesperson for the bishops’ conference acknowledged to A.P. that its officials lobbied for the paycheck program but said the organization was not tracking what dioceses and Catholic agencies received.

“These loans are an essential lifeline to help faith-based organizations to stay afloat and continue serving those in need during this crisis,” spokesperson Chieko Noguchi said in a written statement. According to A.P.’s data analysis, the church and all its organizations reported retaining at least 407,900 jobs with the money they were awarded in thousands of loans.

Ms. Noguchi also wrote the conference felt strongly that “the administration write and implement this emergency relief fairly for all applicants.”

Catholic Charities USA and its member agencies were approved for about 110 loans worth between $90 million and $220 million at least, according to the data.

In a statement, Catholic Charities said: “Each organization is a separate legal entity under the auspices of the bishop in the diocese in which the agency is located. CCUSA supports agencies that choose to become members, but does not have any role in their daily operations or governance.”

July 11: This report was updated to acknowledge America Media's participation in the Paycheck Protection Program
and on July 14 to report on the amount of the loan. Read more about it here.