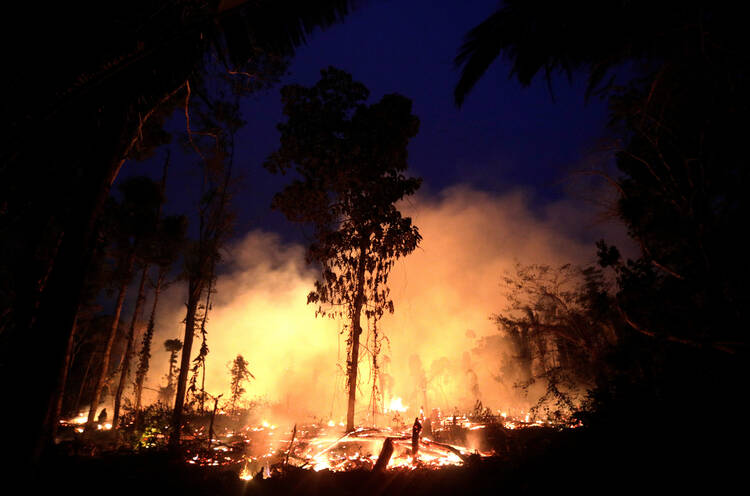 A fire burns a tract of Amazon jungle on Sept. 2, 2019, as it is cleared by a farmer in Machadinho do Oeste, Brazil. The Brazilian Catholic bishops are pressuring the government to guarantee the safety of several Amazonian indigenous peoples. (CNS photo/Ricardo Moraes, Reuters)

During his campaign, Brazilian President Jair Bolsonaro said he would change his country’s policies concerning the protection of the environment and the concession of federal lands to indigenous peoples. It is a promise he has kept since taking office. The accelerating devastation of the Amazon rainforest and the increasing encroachment on indigenous reservations since he assumed the presidency in January have worried members of the Catholic Church in the region, who are trying to help local people resist the new strategy of occupation of the rainforest.

“Bolsonaro doesn’t have any project for the country. For the Amazon, his outdated and anti-ecological strategy contradicts science and a Chico Mendes’s saying: ‘The Amazon is more valuable preserved than devastated,’” said Leonardo Boff, one of the leaders of the liberation theology movement and a longtime environmentalist.

The rate of deforestation in the Amazon from January to the end of September increased 93 percent compared to the same period in 2018, according to the National Space Research Institute, the governmental agency that monitors via satellite the destruction of the rainforest.

Rainforests are not the only things under threat in the Amazon region. There has also been an uptick in violence against native peoples: land invasions, illegal exploitation of natural resources and damage caused by invaders of indigenous lands.

Mr. Boff is one of the signatories of a recent statement, distributed among Latin American theologians and members of Latin American indigenous associations, urging that the Amazon region be protected as an “intangible sanctuary of the common house.” The document was produced by the Indigenous People’s Foundation of Ecuador, an organization founded in the 1980s by members of the Ecuadorian church to promote the rights of indigenous peoples.

It was presented to the bishops gathered in Rome for the Synod for the Pan-Amazon region and calls for the church to declare the Amazon “a sacred land” and for “urgent and deep measures” by “world organs and the states in charge [of the Amazon]” in order to “save life on the planet.”

But rainforests are not the only things under threat in the Amazon region. There has also been an uptick in the level of direct violence against the native peoples. A report released by the Catholic Indigenous Missionary Council, a commission of the National Conference of the Bishops of Brazil, found that the number of cases of invasion, illegal exploitation of natural resources and damage caused by invaders of indigenous lands went from 96 in 2017 to 109 in 2018. In the first nine months of 2019, C.I.M.I. registered 160 cases.

“In our region, I can say that at least 90 percent of the indigenous reservations are currently suffering invasions and illegal exploitation,” said Cleanton Curioso, a regional coordinator for C.I.M.I. in the city of Altamira, in the Amazonian state of Pará.

Mr. Curioso attributes the feeling of impunity among land grabbers, illegal miners and illegal loggers to the election of Mr. Bolsonaro. “These people said out loud that as soon as Bolsonaro took power they would invade every reservation in the region,” he said. Those problems are certainly not new, Mr. Curioso said, but “illegal activities that used to be secret are now shamelessly carried out.”

“In our region, I can say that at least 90 percent of the indigenous reservations are currently suffering invasions and illegal exploitation.”

“Those agencies are very weak now. At times the officers are attacked by gunfire as they arrive to the scene,” he said.

The invaders are usually interested in taking as much wood as they can, clearing whole areas of forest that can later be exploited by miners or used as pastures by ranchers. According to Mr. Curioso, their actions seem to be orchestrated.

This dynamic of invasion and deforestation also affects peasant and quilombola—descendants of African slaves who fled captivity and settled in rural areas—communities in the Amazon.

Gustavo Cepolini, a geography professor at the State University of Montes Claros, explained that both the cleared land and the Amazonian subsoil are allotted to invaders. “The mining interests are present everywhere in the rainforest. So, peasants, quilombolas and indigenous peoples are really protecting not only trees and land but also the subsoil of the Amazon,” he said.

In 2017, Mr. Cepolini coordinated a project to map the land conflicts all over the Amazon at the request of the Pastoral Land Commission, another committee affiliated with the Brazilian bishops. The survey showed that land violence is a longstanding and widespread phenomenon in the Amazon. “But now the attackers count on the legitimacy that has been given to them by the president himself,” Mr. Cepolini said.

Through its organizations and dioceses, the Catholic Church has denounced land invasions in the Amazon region and tried to help victims. Commissions like C.I.M.I. and C.P.T. also play an institutional role in the capital city of Brasília, trying to influence politicians to prevent the current laws of environmental and indigenous protection from being misapplied. Since July, C.I.M.I. has organized talks with members of the Barzilian congress to convince them of the risks associated with Mr. Bolsonaro’s plan to allow mining in indigenous lands—something that is currently forbidden. The project, which also includes the possibility of using indigenous lands for agribusiness, has not yet been approved by the legislature.

“Resisting [the attacks against the Amazon] and helping the people to reflect on these issues are a daily challenge and different organizations of the church are currently very engaged in it,” said Mr. Cepolini.

A recent survey commissioned by the Global Catholic Climate Movement and other nongovernmental organizations showed that the concrete activities of the church to protect the Amazon are likely backed up by the Catholic people in Brazil. Sixty-seven percent of the 1,502 interviewees said they oppose reducing indigenous reservations; 75 percent of the respondents said they oppose the end of environmental fees for people who devastate the Amazon. (One of Mr. Bolsonaro’s electoral promises was to put an end to what he called an “environmental fine spree” in Brazil.) Seventy-three percent said they do not support the weakening of the Brazilian environmental protection agency.

This is hope-inspiring, but also challenging. I believe the best chance we have to truly help protect the Amazon land and people is in Bernie Sanders' Green New Deal. He has proposed $200billion toward the international protection of land and reduction of exploitative mining and an attempt to get to 36% reduction of carbon emissions in poorer countries by 2030. He is showing a realistic and good-faith attempt at international solidarity in protecting the Amazon region and respecting the rights of the indigenous people. As the Church does its best to stand WITH the people and bring the Gospel to them, it will also be helpful to have a government which is trying NOT to return to policies which exploit and endanger them and their habitat. It is good news that the polls of the Brazilian people are on the side of the land and the indigenous people.