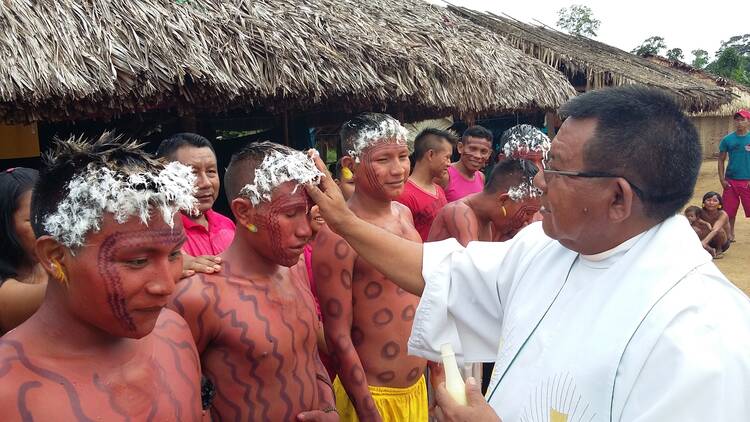 The upcoming Synod of Bishops for the Pan-Amazon Region, which will be held in Rome from Oct. 6 to Oct. 27, has generated much controversy on many fronts, from traditionalist Catholics who fear it may lead to changes to the priesthood to Brazilian President Jair Bolsonaro, who is sensitive to any criticism of his government by the church. But one specific group of Catholics seems to be particularly excited about the meeting: the indigenous peoples of the Pan-Amazonian Region.

After a problematic relationship going back centuries, the Catholic Church and the Amazonian native peoples have been more cooperative recently, and they agree that the synod will advance important changes for local communities.

“The Catholic Church had a cruel expansion in the Amazon. In the Declaration of Barbados, in 1971, several Latin American anthropologists denounced the role historically played by the religious missions [in their interactions with] indigenous communities,” said the anthropologist Lucia Rangel, a professor at the Pontifical Catholic University of São Paulo. “But the church that is currently promoting the synod is the one that adequately understands such a problem.”

Many indigenous missionaries describe how Catholicism was imposed on them during their childhood, together with a contemptuous attitude toward their traditional rituals and beliefs.

Many indigenous missionaries describe how Catholicism was imposed on them during their childhood, together with a contemptuous attitude toward their traditional rituals and beliefs.

“I was educated in Catholicism since my early years by my parents, and they were convinced they should not teach us anything about our indigenous knowledge. It was not part of the ‘civilizational process’,” said the Most Rev. Justino Rezende, a member of the Tuyuka people and a Salesian priest who is assisting in the preparation of the synod.

During the formative years of the indigenous men and women who decided to join the clergy, the weight of cultural differences was continually felt. “At school, a few sisters respected our habits and traditions, but others did not. I wanted to eat our traditional food, such as beiju [a kind of cake made of cassava] and peppers, but they wouldn’t allow me, due to their ignorance of our culture,” Mariluce Mesquita, F.M.A., a member of the Bará people, told America.

“My indigenous colleagues at the seminary felt humiliated when non-indigenous seminarians called them ‘Indians.’ We were educated to be civilized people. Many left the seminary not because they didn’t hear the calling to priesthood, but because of such conflicts,” confirmed Father Rezende.

Only in the 1990s, according to the Most Rev. Josimar Marinho, a priest and a member of the Tukano people, did the church begin to reflect on the theme of cultural resistance. “We started to think on inculturation and faith and to experience the Gospel according to our cultural reality, languages, rites and blessing rituals. But that was already a new generation. My father was not alive any longer,” said Father Marinho.

“We started to think on inculturation and faith and to experience the Gospel according to our cultural reality, languages, rites and blessing rituals.”

At that point, many in the church in the Amazonian region felt the influence of indigenous social movements, which were struggling for their rights to traditional lands and special education. “This is when I discovered the indigenous theology and understood the relevance of recovering our previous knowledge,” explained Father Rezende.

Father Rezende, and other indigenous priests and nuns, then started to study about the ways their traditions and practices could relate to Catholicism. “My parents were experts in dances and blessings. I wanted to revive all this and started to organize and write my own reflections,” said Father Rezende.

Father Geraldo Baniwa, a member of the Baniwa people, felt such a perspective was necessary if he wanted to have a real intercultural debate with the indigenous peoples he works with. “Our peoples don’t have to abandon their own [faith traditions] in order to accept the Catholic faith. A dialogue is possible.”

“Our peoples don’t have to abandon their own [faith traditions] in order to accept the Catholic faith. A dialogue is possible.”

In the city of São Gabriel da Cachoeira, in the Brazilian state of Amazonas, a great effort to build a genuinely indigenous Catholic tradition is underway. According to Bishop Edson Damian, who heads the Diocese of São Gabriel da Cachoeira, many priests already celebrate Masses in indigenous languages. “But it’s not only that. There’s a real indigenous liturgy, with dances, chants and symbols from the different cultures of the region,” Bishop Damian explained.

Out of 21 priests operating in São Gabriel da Cachoeira, 10 have indigenous backgrounds—probably the highest rate in Brazil. “Ninety percent of the church in our diocese is indigenous. So the percentage of indigenous priests is also bigger,” Bishop Damian said.

There are no official numbers, and it is not easy to find indigenous priests in other regions of the country, although the indigenous population in Brazil corresponds to at least 900,000 people. “Indigenous priests are very rare outside of São Gabriel da Cachoeira,” Bishop Damian said. “But the church here has done strong work in evangelization and inculturation of the Catholic faith. This has created very zealous Catholic communities. Many indigenous peoples declare they’re Catholics and don’t allow preachers from any other denomination to enter their villages.”

With large geographic distances—the total area of São Gabriel da Cachoeira is bigger than Portugal—and a lack of transportation resources, many communities are visited by clergy only a few times each year. “There are 19 communities in my parish and I’m not able to visit each one of them more than four times per year,” said Father Baniwa. “I think the ordination of married ministers [one of the proposals that will be discussed by the synodal bishops] would be very positive.”

Sister Mesquita—who also still uses her indigenous blessing name, Diatoh—is equally excited about the possible changes the synod will bring. “Pope Francis called the Synod for the Amazon to strengthen our communities and our faith,” she said.

Father Rezende also hopes that the synod will improve the relationship of the church in the Amazon with indigenous peoples. “Maybe the missionaries will start to come to the indigenous communities not so much with the intention of teaching them, but of learning about their traditions and knowledge.”

Very promising! And evidence that the Church, like all wise organizations, and indeed like all truly wise people, is both teacher and learner (including a learner from past mistakes).

I would also like to share this quotation from Mircea Eliade's book (which I love) Shamanism: Archaic Techniques of Ecstasy:

"To repeat, far from creating myths, historical events end by being absorbed into mythical categories".

Prayers and good wishes for the Amazon synod, the forest itself, and the indigenous peoples of the region. And the Church!

The missionary method is Clever man's methods (get the People on their side by offering milk powder, clothing medicine etc.etc. and NOT using Apostolic methods because they missionaries lacked the ACTIVE presence of the Holy Spirit in them unlike thos who are TRUE APOSTLES of Jesus the Lord.

Holy Spirit Guidance and Signs and wonders which are signs of the KINGDOM are lacking as a whole in missionary methods. SO often Arrogance is part of their way of functioning at least in good number of them. They are in a HURYY to win NUMBERS. SO they used easy WAYS and SHORT CUTS.

IF India has resisted the Gospel, it is NOT the GOSPEL as SUCH which they resisted but the Gospel-givers who DESPISINGLY looked at and spoke and wrote in the same way even about the GOOD things in the Religion, Philosophy and Rituals of Hinduism. The WRITINGS Gandhiji and Swami Vivekananda ( who wrote, "Keep close to CHRIST IF you want SALVATION." "He is higher than any God you can imagine." Ref. Complete Works, MAYAVATI MEMORIAL EDITION, Champavat, Himalayas, Year 2002, VOl. VIII, Pg.190-191, "Incarnation or Avatara.") ARE witnesses to this TRUTH.