In Brazil, Bolsonaro, the ‘Trump of the Tropics,’ takes office 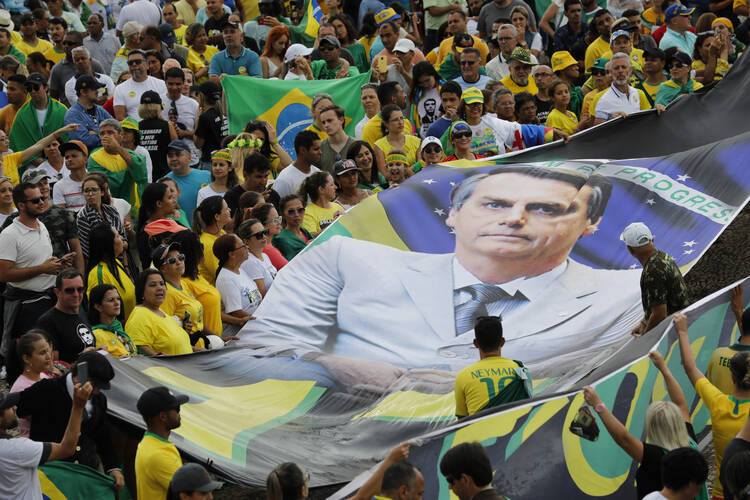 On Jan 1, supporters of Brazil's new President Jair Bolsonaro display a giant banner of him on his inauguration day in Brasilia, Brazil. (AP Photo/Silvia Izquierdo)

If you decide to criticize Brazil’s newly installed president, you had better be ready to get into an argument.

Mr. Bolsonaro’s far-right rhetoric during the campaign has led to uncertainties about his policies as president and drawn international concern about the course he will set for the nation. The lack of a clear Bolsonaro agenda leaves Brazilians with little other choice than to fall back on what they do best: Cheer for a big win.

As Mr. Bolsonaro begins his term, it is common to hear in conversations on Brazil’s streets and across its dinner tables statements like: “Stop mocking the man; he hasn’t even started to rule” or “Let's give him a chance.” Years of Workers’ Party leadership, many now feel, led Brazil to disaster. Mr. Bolsonaro’s supporters call him a legend—mito in Portuguese. During the inauguration ceremony on Jan. 1 in Brasília, they shouted, “The captain has arrived.” (The new president is also a former military man.)

In fact, 65 percent of Brazilians believe he will do a good job as president, according to a Datafolha poll. That figure may suggest high popularity, but the president’s numbers are actually slightly lower than those generated by the early enthusiasm for his recent predecessors in office.

As Mr. Bolsonaro begins his term, it is common to hear in conversations on Brazil’s streets and across its dinner tables statements like: “Stop mocking the man; he hasn’t even started to rule” or “Let's give him a chance.”

Brazilians were willing to vote for a radical change in a strong backlash to the left-wing Workers’ Party, political home to former presidents Luiz Inácio Lula da Silva and Dilma Rousseff. Together, the pair kept the Workers’ Party in national power for 13 years. During that time systemic corruption all but neutralized the political success their leadership achieved for the Workers’ Party through their programs to fight inequality.

The reign of the Workers’ Party ended with Ms. Rousseff’s impeachment. She was blamed of “window-dressing” government accounts and replaced by her vice president, Michel Temer, who won the support of the center-right during his two years in power. Mr. Temer, who had his own problems with corruption in office, in turn has passed the presidential sash to Mr. Bolsonaro, whose campaign as leader of the Social Liberal Party (Partido Social Liberal) was mostly based on populist promises.

Mr. Bolsonaro has been dubbed the “Trump of the Tropics” and says he wants to make Brazil as great as “the [country] we had 40, 50 years ago.” He was the first politician in Brazilian history to centralize his campaign strategy on social media, winning the election after spending only $750,000, according to self-reported figures from the P.S.L.

His aggressive use of social media is typical of “contemporary populists,” says the Rev. Rocco D’Ambrosio, professor of political philosophy at the Pontifical Gregorian University in Rome. The wave of right-wing populism in many countries—among them the United States, Italy, France, Hungary and now Brazil—is a consequence of a “lack of political knowledge and education, and an absence of active participation among the people in democratic processes,” he told America.

WhatsApp, YouTube and Facebook were powerful sources of news—and “fake news”—during Brazil’s election. At the inauguration ceremony, Mr. Bolsonaro’s supporters shouted the names of Internet companies that they felt freed them from the monopoly of the nation’s traditional media organizations.

According to Father D’Ambrosio, it is precisely that level of dissatisfaction with the status quo that opened the doors to populism in Brazil. He says that other characteristics of the kind of populism that has been successful in the nation include: the idea that “others” bear responsibilities for the problems society faces; the belief that citizens need to entrust themselves to a totally new leader in order to be saved from the evils of this world; and the faith that it is possible to build a good world from a bad one based “on vain promises and no strategic vision.”

Much of Mr. Bolsonaro’s world view derives from his identity as an army captain. Brazil’s new president appointed seven military men to his cabinet of 22 ministers. Throughout his political life, Mr. Bolsonaro has consistently praised the oppressive military regime that ruled Brazil between 1964 and 1985, arguing that the country “never saw a dictatorship.” During the inauguration of his defense minister, General Fernando Azevedo e Silva, the president said that the armed forces are actually “an obstacle for those who want to usurp the power.”

Much of Mr. Bolsonaro’s world view derives from his identity as an army captain.

Mr. Bolsonaro sees enemies on different political battlefronts. He aims to “cleanse” the country of the political left and socialism; to end special treatment offered to minorities such as indigenous people, Afro-descendants and the L.G.B.T. community; to legally facilitate armed combat by the police against criminals; to make the possession of firearms more accessible to “good citizens”; to fight against “gender ideologies,” especially in public education; and to align Brazil's foreign policy with that of the United States, particularly with President Donald Trump’s anti-globalist agenda.

Speaking to Congress after his inauguration, Mr. Bolsonaro summarized his concerns: “I take this solemn moment and call upon each and every congressperson to help me in the mission of restoring our homeland, definitively freeing it from the yoke of corruption, crime, economic irresponsibility and ideological submission,” he said. His corruption watchdog is the judge Sérgio Moro, appointed justice minister. Mr. Moro was responsible for the internationally famous Operation Car Wash anti-corruption investigation. He has said that “Brazil will not be a safe haven for criminals.”

Mr. Bolsonaro called on Brazil’s Congress to “unite the people, value the family, respect the religions and our Judeo-Christian tradition and combat gender ideology, preserving our values.”

“Brazil will once again be a country free from ideological shackles,” he insisted. His rhetoric has been strongly supported by socially conservative Protestant evangelicals and Catholics. “My electoral campaign responded to the call of the streets and forged the commitment to put Brazil above everything, and God above all,” he said.

Only a few hours after his inauguration, the president targeted some minorities through executive orders. For example, he responded to political allies in agribusiness who had opposed a government policy of discouraging development on lands that had been granted to indigenous peoples. Mr. Bolsonaro transferred the responsibility for defining indigenous territories from the Justice Ministry to the Agriculture Ministry.

Observatório do Clima, a network of 45 Brazilian civil society groups, criticized that executive order, calling it “only the first step on meeting Bolsonaro’s campaign promises of dismantling environmental governance, stripping indigenous peoples of their rights and opening up indigenous lands for business.”

Another order removed the explicit inclusion of the L.G.B.T. community in the description of civil rights protections promulgated by the Women, Family and Human Rights Ministry. The codes now speak of caring for “social and ethnic minorities.”

Mr. Bolsonaro aims to “cleanse” the country of the political left and socialism; to end special treatment offered to minorities such as indigenous people, Afro-descendants and the L.G.B.T. community.

The human rights minister, an evangelical pastor, Damares Alves, said in a speech after taking office that the state is secular, but she is “terribly Christian.” She also said the ministry “will fight against all types of discrimination, including against L.G.B.T. people.” However, Ms. Alves went viral on the internet, commenting before media that Brazil had begun “a new era, in which boys wear blue and girls wear pink.” She later clarified that the color coding was meant a metaphor for resisting gender ideology.

In addition, according to the Washington Post, incoming Foreign Minister Ernesto Araújo referred to the nation’s L.G.B.T. community as “those that say they are not men and women.” Mr. Araújo is a Trump enthusiast who has said the U.S. president is saving Western Christian civilization from “radical Islam,” “cultural Marxism” and globalism. His plan is to align Brazilian foreign policy with the United States. That may mean closer ties with Israel and greater distance from leftist governments in China, Cuba, Nicaragua and Venezuela. Mr. Araújo has already discussed these during a meeting with U.S. Secretary of State Mike Pompeo.

It is not yet clear how Brazil’s Catholic bishops will react to Mr. Bolsonaro’s government. During his campaign, he described the nation’s bishops’ conference as “the rotten part of the Catholic Church.” Traditionally, the conference has avoided conflict with government but calls for both pro-life and social justice policies. The conference, like Mr. Bolsonaro, has been a critic of “gender ideology.” Brazil’s bishops’ conference has not issued an official statement so far about the new president, but individual church leaders and bishops have supported or criticized him during the campaign.

Perhaps the biggest test for Mr. Bolsonaro will be how he responds to the nation’s current economic crisis—an issue that troubles every Brazilian mind. In 2018, Brazilian G.D.P. grew less than 1 percent, and the country still has about 13 million people unemployed. Mistakes in economic policy cost Ms. Rousseff support both in the general population and in Congress. This is also a danger for the new president.

His economic guru is a free market economist with a degree from the University of Chicago, Paulo Guedes. That appointment and the new economic minister’s first gestures have been well-received by the world of finance. São Paulo’s stock market jumped 3.56 percent to a record closing of 91,012 points on Jan. 2 as new cabinet ministers reinforced Mr. Bolsonaro’s intention to privatize state-owned companies and reform the social security system. A Brazilian arms maker has also benefited from proposals to loosen gun controls.

Nevertheless, economic reforms might be unpopular. A major uncertainty for Mr. Bolsonaro’s administration is how much he will be able to unite the country. His speech in Congress was conciliatory, as he will need both the House and the Senate to govern.

But on day one of his government, it was First ady Michelle Bolsonaro who did the most to bring Brazilians together. She took the unusual step of offering her speech in libras, the Brazilian sign language for deaf people.

That politically correct gesture surprised both supporters and opponents. But Mr. Bolsonaro quickly reassured the country that he will free his people from “socialism, reversal of values, state gigantism and political correctness.”

Filipe Domingues reports from Brazil. With content from The Associated Press.

Correction: Because of an editing error, Mrs. Bolsonaro’s speech was described as a simultaneous translation. It was not. She delivered her remarks in Brazilian sign language.

“Populism is evil and ends badly. It is the abuse of the people” - Pope Francis

What is populism? I haven't ever seen it defined accurately. It is becoming like "fascism" a term that means something negative but we don't know what it is.

Does it mean the will of the people? If so how is that bad?