Mexican bishops: Our migrant brothers are not a bargaining chip. 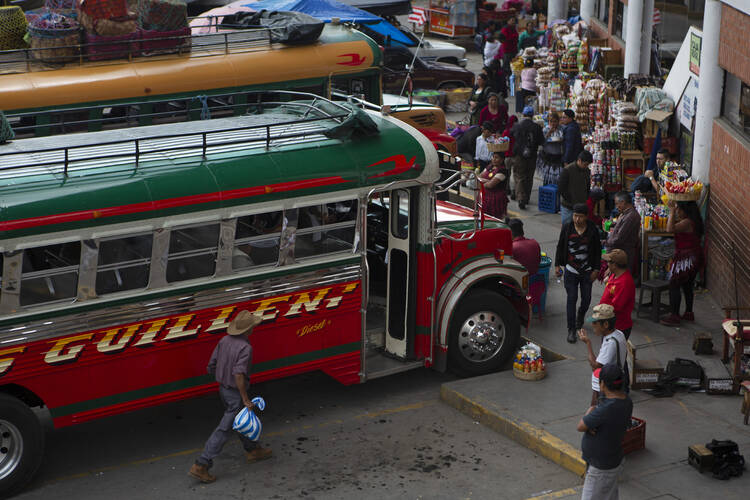 The bus terminal in San Marcos, Guatemala, on Jun 8, the spot where many Guatemalan migrants begin their journey to reach the United States. (AP Photo/Moises Castillo)

Mexico’s bishops’ conference issued a critical assessment of the agreement reached between U.S. and Mexican negotiators on immigration on June 7. In their statement the bishops expressed a concern “for the lack of a truly humanitarian response to our migrant brothers that reflects our beliefs regarding the recognition and protection of the rights of all human beings equally.”

“No negotiation,” they wrote, “should be placed above what the church and civil society have defended for years: the non-criminalization of migrants and human rights advocates who often fight for dignity against the current and with significant risks to their own security.

“Our migrant brothers should never be a bargaining chip,” the bishops said. The statement was signed by the Most Rev. Rogelio Cabrera López, the archbishop of Monterrey and president of the Episcopal Conference of Mexico and other C.E.M. leaders.

According to the bishops’ statement, the Catholic Church in Mexico “is convinced that a just migration policy is necessary that...guarantees a free and orderly, regulated...flow of people” and at the same time safeguards the legitimate interests of Mexican citizens.

In reaching a deal that would include the deployment of 6,000 members of the recently established National Guard to Mexico’s border with Guatemala, representatives from the Trump administration and the government of Mexico successfully fended off President Trump’s threat to apply a series of escalating tariffs on imports from Mexico.

“Our migrant brothers should never be a bargaining chip,” the bishops said.

Mr. Trump had said he would begin a 5 percent tariff on June 10 as a means of pressuring President Andrés Manuel López Obrador of Mexico into stronger counter-measures against migration from Central America. He planned tariffs as high as 25 percent if he were not satisfied with the Mexican response. The turn to tariffs as a tool for political leverage was criticized by members of Congress from both parties, and business executives and economists worried tariffs would throttle trade between the two neighboring states.

The president made the threat in apparent frustration with a significant spike in the numbers of Central American migrants reaching the U.S. border from Central America. Many are filing legal asylum claims when they reach U.S. ports of entry. According to some press reports, though they have placated the president, at least temporarily, the recent commitments from Mexico to contain migration and temporarily accept asylum seekers had been agreed to months ago.

Whatever the actual timing of the National Guard commitment, Mexico’s bishops were not impressed by the practical or spiritual implications of the gesture. “Deploying 6,000 National Guard troops on the southern border is not a root solution that addresses the true causes of the migration phenomenon,” they wrote. “The fight against poverty and inequality in Mexico and Central America seems to be replaced by fear of the other, our brother.

“If we have rejected the construction of a wall as Mexicans,” they said, “we cannot convert ourselves into that wall. In this scenario we remember the words of St. Paul: ‘Because Christ is our Peace, He made both peoples one by breaking down the wall of enmity that separated them’ (Eph 2,14).”

They urged the United States and Mexico to continue negotiating without resorting to the “easy temptation” of threats and blackmail. Instead, the two hemispheric neighbors should walk together “as brothers” and by serving each state, serve the entire region.

“If we have rejected the construction of a wall as Mexicans,” they said, “we cannot convert ourselves into that wall.”

“As members of the human family,” the bishops said, “we cannot be indifferent to the pain that [migrating people] live in and that demands our humanitarian assistance and unlimited respect for their human rights.” The bishops said they were ready, in cooperation with U.S. bishops, to continue providing humanitarian outreach to the groups of migrants traveling through Mexico to the border.

The bishops acknowledged that “it is entirely legitimate and necessary to take courageous decisions to avoid the imposition of tariffs” and celebrated an agreement “which prevents serious and unjust economic damages to our country.” They urged that such trade and political dialogue continue between the two states mindful of “respect for Human Rights, solidarity among peoples and work for the common good of our region.”

But they also urged greater regional economic cooperation between Mexico and its immediate neighbors in Central America as part of a comprehensive response to the migration crisis. “In this historical moment,” the bishops wrote, “government and society must not give up in promoting integral human development for Central America and the Mexican Southeast.”

“‘Everything is connected,’ Pope Francis reminds us in ‘Laudato si’.’ This principle is extremely important: Mexico is not isolated. It is a sister country that must build, together with the Central American countries, a strategy that serves the common good of the region,” and not just a momentary response that only serves “a certain partial good.”

The bishops acknowledged that “thousands of migrants are waiting to cross into the United States fleeing violence and misery in their countries of origin.” They worried that “many others are arrested and deported to Mexico” under “the unilateral American program of ‘Remain in Mexico’ program.” The bishops are concerned that thousands will be forced to wait for a resolution of their immigration status in Mexico, “exposing them to serious risks in the Mexican border cities and preventing their full access to legal assistance.”

"But they (the Bishops) also urged greater regional economic cooperation between Mexico and its immediate neighbors in Central America as part of a comprehensive response to the migration crisis. " This is the most important sentence in the article. Given all the problems in Central America why has no one, including the Bishops, considered that the small countries of El Salvador, Nicaragua, Honduras, Guatemala be merged or annexed into Mexico? Mergers and acquisitions happen all the time in the international business world. Wars instead are fought over political or geographic boundaries. Does this make sense? I don't think you get economic growth without investment. How do you get investors interested in Central America? Well lamenting over policies of the U.S. going back 150 years will not accomplish much. Does Central America lack natural resources? Or people? What has gone wrong in Venezuela? And why?

I can understand that people in the US don't follow the news from here in Mexico, but the Bishops are referring to President López Obrador's "Marshall Plan" for Central America and the Mexican south. Mexico, despite an austerity budget and well-reported cutbacks (even selling the Presidential airplane and limosines) has planned for major spending, not just in Mexico itself, but for the benefit of our neighbors to the south. One must remember that our President, AMLO, began his career as a social worker, and — wily politicians from the militantly secular left that he is — his public statements and what is reported of his private life, is one of "Christian" values. One doesn't often hear political figures saying "I am my brother's keeper" and meaning it. NO.... no one is talking about annexation, nor would they. Heck, as any Latin American scholar can tell you, while they were part of New Spain, and the brief Mexican Empire of Agustin Itubide Mexico has never sought to re-incorporate the region, nor any other region for that matter.

As to your question about natural resources... since the mid 19th century, they have been in the hands of US and European firms. Almost two centuries of looting, after three centuries of Spanish colonialism, and more recently, US political control, has prevented the Central AMerican peoples from control of their own resources.