As violence in Mexico continues to rise, can a new National Guard help? 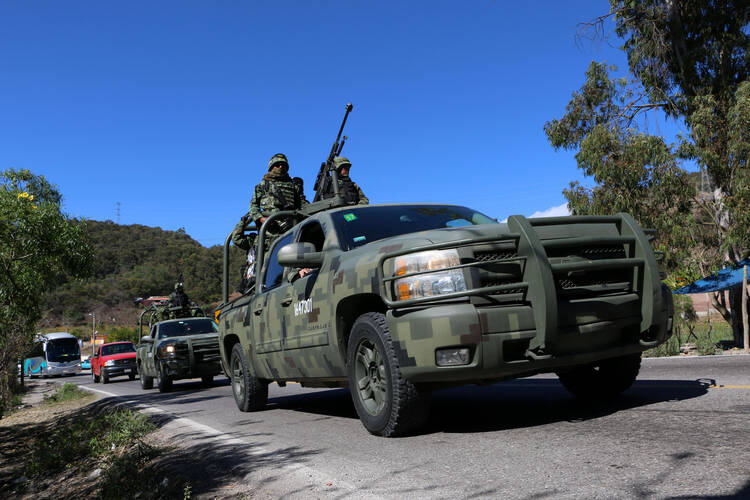 Armed members of the Mexican Army and state police arrive in Chilapa in 2016 to participate in an operation against organized crime. (CNS photo/Francisca Meza, EPA)

On April 19, a group of armed men burst into a bar in Minatitlán, a town in the eastern Mexican state of Veracruz, during a family celebration. They killed 13 people, including an infant boy. On May 28, the bodies of six men were found in Satevó, in the northern state of Chihuahua. They were shot and their bodies, wearing military-style uniforms, dumped in a ditch.

These bloody incidents are worrying signs of what is now seemingly inevitable: 2019 is set to become the most violent year in Mexico in recent memory. According to the federal government, at least 8,493 people were killed during the first three months of this year. If this trend continues, the year will end with approximately 35,000 murders in Mexico—more than the already record-breaking 34,202 homicide victims of last year.

Crime and violence are perhaps the most daunting challenges facing the administration of President Andrés Manuel López Obrador, who assumed office on Dec. 1, 2018. Mr. López Obrador had been swept into office on a wave of popular anger at endemic corruption, inequality and the perceived inability or even unwillingness of his predecessor President Enrique Peña Nieto to deal with powerful organized crime groups.

On May 23, the Mexican Congress, controlled by Mr. López Obrador’s Movement for National Regeneration (Morena), approved a series of laws aimed at finalizing the creation of the president’s answer to the violence that plagues the country—the National Guard, a new security force.

2019 is set to become the most violent year in Mexico in recent memory. According to the federal government, at least 8,493 people were killed during the first three months of this year.

The National Guard is meant to relieve Mexico’s armed forces, which have been accused of thousands of human rights violations, of a role in fighting organized crime, a role the military assumed over a decade ago. The National Guard will initially consist of some 60,000 former soldiers joined by federal and naval police.

Through a broad training and recruitment process, the government hopes to add another 90,000 members by the end of the year. According to the López Obrador administration’s National Security Plan, the new force will gradually assume its duties over a period of five years, after which the armed forces will have been fully retired from a role in fighting crime.

Mr. López Obrador’s government has hailed the creation of the National Guard as the solution to Mexico’s crime problem. On April 22, he even framed the new force as vital to his promise to reduce violence over the next six months.

The president received tentative support from some members of the church leadership in Mexico. In March, the vicar general of the Diocese of Querétaro, the Rev. Martín Lara Becerril, acknowledged that security had become a critical problem in Mexican life. "It is necessary for the people to move forward [with their lives] safely, so that young people and children can be safe and families can work,” Father Lara Becerril said.

“We hope that the National Guard will collaborate in a decisive way for the safety of the people,” he said, “and we are very happy that it has a civil face,” noting that the new security force will be under civilian, not military command.

Critics and observers, however, have expressed deep concern with the National Guard. They believe the new force continues the militarization of Mexican law enforcement and does little to protect civil society from human rights violations.

“Truthfully, it’s very worrying how the National Guard was created,” Francisco Rivas of the Citizens’ National Observatory, a human rights group, told America. “The project was framed as an alternative to the Federal Police, which has not been able to stem the violence in the country, which in turn led to the armed forces engaging in fighting crime. The National Guard is supposed to correct this.”

Critics worry about the capacity of the new force to respect human rights. Although the National Guard will be subject to civilian courts and will be led by civilians, Mexican soldiers have been accused of thousands of human rights violations over the past decade.

Few believe it will, however. Critics such as Mr. Rivas point out that the National Guard simply will not be enough to deal with the violence in the country. Many observers say this is due to the legislative process that created the force to begin with.

“The way the National Guard came about was rushed and didn’t respect the process,” warns Fernando Dworak, a political commentator in Mexico City. “The uniforms of the National Guard were already presented while the discussion about the laws that led to its creation were still being debated.”

Deeper concerns are voiced by critics about the capacity of the new force to respect human rights. Although the National Guard will be subject to civilian courts and will be led by civilians, Mexican soldiers have been accused of thousands of human rights violations over the past decade.

“In theory, the former military who will become members of the National Guard will be subjected to sensitivity training with regard to human rights, but I don’t see that happening in practice. There won’t be enough to time to train them in that sense,” Maria Elena Morera of the human rights group Causa en Común told America. “Soldiers are prepared for war, not fighting crime. The uniform won’t change that.”

Ultimately, critics say, the National Guard, with its decidedly military character, is more of the same, a continuation of militarized law enforcement in a country where more than 90 percent of crimes can be carried out in impunity. This was underscored by the federal attorney general’s office recent revelation that under Mr. Peña Nieto’s leadership a staggering 300,000 criminal cases were not even investigated.

“The real problem in Mexico is that we just don’t have a policy to deal with crime,” Ms. Morera said. “The judicial system is very weak, and this government isn’t investing in it.”

Mr. Rivas agrees. “Member states of the Organization for Economic Cooperation and Development have on average three policemen per 10,000 citizens. Mexico only has 1.2, but in reality we need four or five to really deal with the problem. The National Guard won’t fix this,” he said. “We also don’t spend enough on law enforcement. Mexico only spends about 1.7 to 1.8 percent of its budget on security, well below the 3 percent O.E.C.D. average, but we would have to spend 4 or 5 percent to really deal with the crime problem. Even with the National Guard, we’re not spending enough.”

In fact, the López Obrador administration may exacerbate the situation through implementing severe budget cuts to municipal and state governments, which include law enforcement agencies, as part of a strict austerity program, according to Ms. Morera. The president has argued Mexican public officials and political elites have long lived far too lavishly, but observers say the budget cuts may make the crime problem worse.

“By not investing in law enforcement institutions and simultaneously creating the National Guard, local governments are incentivized to just outsource law enforcement to that new force. It weakens the justice system,” Ms. Morera said.

Mr. Rivas agreed. “These budget cuts are bad news,” he said. “They will make institutions that procure justice weaker, even if that’s where we should invest more in.”

“In the end,” he added, “it’s just too easy to commit a crime in Mexico and get away with it. The National Guard won’t change that.”

Spain kept all of Latin America off limits to the rest of the world into the early 1800's. They were preserving for themselves whatever resources were there. By doing so they also stilted any development in this area. The effect remains til today as Latin America has become a very violent area and often poorer.
At the beginning of the 19th century they allowed Humboldt to explore only because he had a mining background but essentially much of this area remained isolated from ideas spreading in the rest of the world. Land ownership and personal freedom for the masses was curtailed even with the so called liberation in the 1800's.

It's unfortunate that the name and the picture above suggests an equivalence with the military organization called the National Guard in the United States. It is not, it's a police force, similar to the Carabinieri in Italy. The Mexican state badly needs greater capacity to secure the country. This is a step forward. It was created in the last few months, it will continue to grow and is expected to take the burden off the armed forces, which are not trained and equipped for public security.