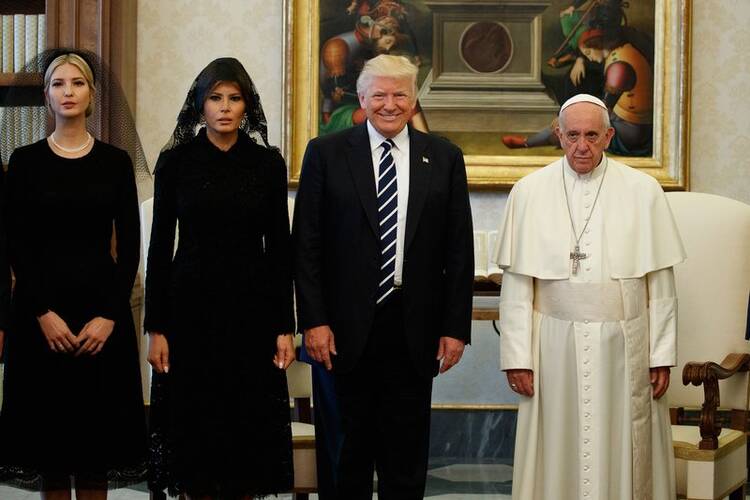 Ivanka Trump, First Lady Melania Trump, and President Donald Trump stand with Pope Francis during a meeting at the Vatican on May 24, 2017.

In an interview on Mexican television that first got attention for his comments about former cardinal Theodore McCarrick, Pope Francis condemned Donald Trump’s “cruel” immigration policies, delivering a sharp rebuke to a president whose anti-immigrant rhetoric has defined his time in office.

In the past Pope Francis has denounced “wall building” and urged political leaders around the world to “build bridges.”  But these admonishments have tended to be more general, with the pope sidestepping direct criticism of Mr. Trump. This time, fielding a question about conditions at the U.S. border, the pope railed against the current U.S. immigration policy of separating children from their parents as an act that is against natural rights.

“It falls into the greatest cruelty,” he said. “To defend what? The territory, or the economy of the country, or who knows what?”

“We already know one wall,” the pope said, “the Berlin Wall that brought us enough headaches and enough suffering…. But it seems that man does what animals do not do, doesn’t it? Man is the only animal that falls twice into the same hole.

“It falls into the greatest cruelty,” he said. “To defend what? The territory, or the economy of the country, or who knows what?”

“We’re back to the same, right? The building of walls as if that were a defense.” Pope Francis advised that true security can be discovered in dialogue, development, hospitality, education and integration. “In this I do not mean only the border of Mexico,” he added. “I speak of all the barriers that there are.”

When the interviewer, Valentina Alazaraki, asked the pope what he would tell Mr. Trump if they were alone together, in a room with no cameras, he replied: “The same. Because I say this in public!... I also said in public that the one who builds walls ends up a prisoner of the walls he constructs.

“Instead,” he said, “those who build bridges make friends, shake hands, even if they stay on the other side.”

The pope also spoke with Ms. Alazaraki about his relationships with foreign leaders. He said he tries to “find something good in everyone,” including those politicians with whom he disagrees.

“Gossip is a universal defect, and it applies to everyone,” Pope Francis said, “to rulers, non-rulers, children, young people, men, women, everyone. They say that women are more gossipy: Rubbish! Men are also gossips.” In the Roman Curia, the pope has distributed a pamphlet titled “Don’t speak badly of others.”

The pope also spoke with Ms. Alazaraki about his relationships with foreign leaders. He said he tries to “find something good in everyone,” including those politicians with whom he disagrees.

Asked about church teaching on homosexuality, the pope emphasized his belief that we are all God’s children, reiterating that families must love and include all of their children. He vehemently denied ever having said that young people trying to understand if they had “a homosexual tendency” should see a psychiatrist. But, he added, that “doesn’t mean I approve homosexual acts, far from it.” He said his position on homosexuality remained “conservative,” clarifying that church doctrine remains unchanged despite his famous comment on gay priests, “Who am I to judge?” in 2013.

Ms. Alazaraki also asked about the pope’s interactions with marginalized people, citing conversations with a transgender man and a divorced Argentine woman. “You grabbed the phone and called a divorced Argentine woman, and then she leaves saying: ‘The pope told me that I can go to communion’... and the priests put their hands on their heads and say, ‘And now what do I do?’ because the doctrine has not changed, shall we say. So, how do you handle these situations?”

In response, the pope said, “Sometimes people, for the enthusiasm of being received, say more things than the pope said; let’s keep that in mind.”

Anyone noticed that there is a wall around the Vatican State and armed guards permitting or barring entry. One of the conditions for entry or rejection is a dress code!

Also a massive wall around the New Jerusalem from Sunday’s reading. I wonder if the author heard it.

Also the migrants are avoiding anything Catholic. Has the author or the Pope noticed this? The Pope has an opportunity to bring thr Catholic Church on the side of the natural law which God gave us and he takes the opposite direction.

Thank you Alan. I thought this hypocrisy was already to to rest. Not only the Vatican, but every Americamag urban liberal doesn't walk the walk either. They have security and live in heavily "white" demographic locations.

Will Nier
3 years 8 months ago

Cruel??? It is rather welcoming I think. We do admit just about anyone. We need to admit into the USA based on merit and need.

The Pope is so wrong on this. He ignores the financial damage that illegals do to legal residents. Illegals take jobs -- and income -- from legal residents. Their kids take up classroom space, and time, that could be better used to educate legal residents' kids. Why did his holiness not complain about any of obama's immigration or drone policies?

The Pope is wrong? If he is wrong so is God. In both the Old and New Testaments, God commands that we love our neighbor, the alien, and enemy. What is the Bible's attitude about immigration and refugees. in particular? In short, biblical scriptures purports that we are to be generous and supportive of strangers. Frequently, they have been abused, needy, poor, and have no power. Because their ethnicity might be different is no reason to assume that the foreign stranger is a danger. Objecting to love the refugee because one thinks the floodgates will open and refugees will betray our kindness or take jobs away is not an excuse. A better reaction to this is to acknowledge that true faith and discipleship involves taking a risk whenever dealing with humankind. Look to the Gospel of Luke that teaches followers of Christ are expected to look after the humiliated and marginalized. The Gospel of John speaks on common life of love we are to provide to one another according to Christ; which includes our neighbor, enemy, and alien. Lastly, let us remember Isaiah where God warns those (nation) who enact laws that oppress, mistreat or abuse the poor, widows, and children will be judged. Altonette Stone

At Mass on Sunday in the reading the New Jerusalem had a massive wall. Maybe the Pope read it.

There is so much wrong with this statement. First of all, undocumented immigrants do not "take jobs" from citizens. Rather, they do the work that citizens don't want to do, often working two or three jobs to support their family. They contribute to the economy. They don't take advantage of social welfare programs as they aren't eligible for them. As far as children "taking up" classroom space, I welcome that. The children did not ask to come here, they are the most vulnerable in this argument and deserve love and care. This uncharitable view of "us" vs. "them" is exactly what is wrong with this country. I also get frustrated as there are plenty of white undocumented immigrants in this country, but no one seems to be bothered by that. Unless you are a Native American, we all have roots back to immigrants who, in all reality, came here illegally. We took this country from another group. We have no right to deny others.

Thank you Erin for making that clear, unskilled Immigrants do not take jobs ! But on Trump’s new policy on Immigration he now wants to triple the number of Immigrants who have skills and are educated. Guess whose jobs they are going to take ? Trump is going to take your good Paying American Jobs that are currently held by Americans and would be available to our College Grads and give them to Immigrants. Trump Supporters say the Wall will prevent Immigrants from taking our good paying jobs but Trump now wants the skilled and educated Immigrants to come in and take your good paying jobs. Unskilled Immigrants are doing the jobs that Americans won’t do.

People, particularly those on the eastern side of the Wall, have got to question the intelligence and common sense of this particular successor to Peter. In my almost 70 years as a faithful pew-sitting Catholic, this is the dumbest pronouncement I have ever seen come out of the Vatican. I pray that the adults take over.
Wonder why there's a caravan of immigrants to the United States from Mexico and Central America ? The big-C Catholic Church still prefers medieval feudalism to the Scottish enlightenment.

I wonder if Francis is suffering from early stage dementia. Recall the number of times when he has spoken off of the cuff while on his personal jet only to have the Vatican rush to clarify what he meant. Comparing the Berlin wall to a Mexican wall indicates he either really isn't too bright or there is something terribly wrong.

I think the Pope forgets that the Berlin Wall was built not to keep the western powers out,rather it was built to keep their own captive people in.
So much for the “workers paradise”.

a very confusing article with bits and pieces lumped together with little coherence. Very easy for the Pope to be have such a generous attitude towards migrants at Amercan borders while he sits inside his walled Vatican City. Francis has a great talent for speaking out of both sides of his mouth simultaneously.

The pope did not compare the reason for the wall, he just indicated the problem with having walls, whether they be to keep people in, or to keep them out.

Does the Pope actually KNOW what the USA is doing for these people on our border? I don't think so. Perhaps if they were of such concern to his holiness he should come for a visit to see for himself. Please and thank you! Seek the truth before you comment.

It’s troubling that Pope Francis would make comparisons to the Berlin Wall in this way. It is a divisive and ridiculous statement. The majority of Americans want legal immigration reform and protection from the real problems that are occurring because of illegal entry into our country.
With all due respect, Pope Francis has enough on his plate to deal with the immorality amoung some Catholic clergyman. His words are beginning to fall upon deaf ears including at least one Catholic faithful.

We are a nation of immigrants. All of us are. Immigrants are our brothers and sisters. We do need immigrants for our economy. It is a question of control and helping our neighbor. Again, Matthew 25:36-41....All of us will be held accountable for separating children from parents and not helping Jesus at the border.