How Catholics are helping immigrant children separated from their parents 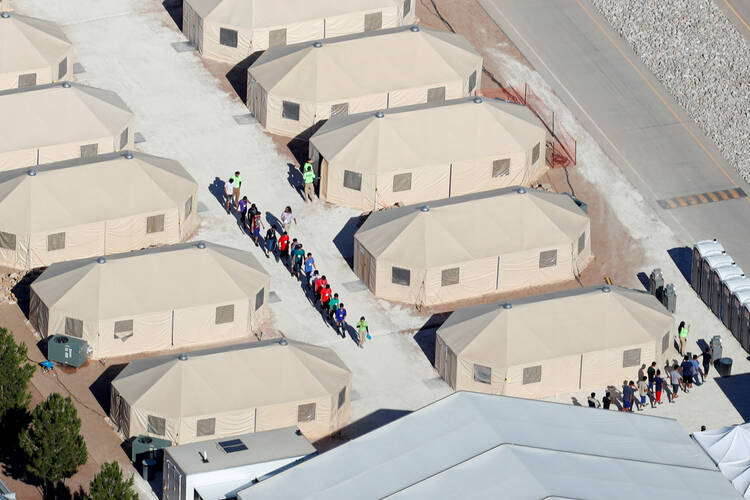 Around 20 to 30 new children have been attending Sunday Mass at St. Eugene de Mazenod Church in Brownsville, Tex. Parishioners pray for the children during the liturgy and then serve them breakfast.

“They want to take care of them and let them know they’re loved,” said the Rev. Kevin Collins, an Oblate and pastor of the parish. The children come from Casa Padre, the nearby shelter for unaccompanied minors.

A few years ago, the nonprofit Southwest Key Programs bought the building, which used to be a Walmart, and converted it into a detention shelter for undocumented minors who entered the United States illegally without their parents. Around 5 percent of the 1,500 children who are detained there have been separated from their parents.

The number of children at centers like this one has been escalating since Attorney General Jeff Sessions announced a “zero tolerance” policy, vowing to prosecute everyone who enters the United States illegally. Mr. Sessions said that children who enter illegally will be separated from the adult who accompanies them, whether the adult is a parent or a smuggler.

“You can see a certain sadness in them.... I’m sure they don’t want to go back.”

Some of the deacons at St. Eugene’s go into Casa Padre once a week. Father Collins said he has been trying to get parishioners to serve Salvadoran pupusas rather than breakfast tacos since the children tend to be Central American.

“You can see a certain sadness in them,” Father Collins said. “They’re in between. They left their home countries, and now they don’t know what’s next. They’re hoping and praying something happens. I’m sure they don’t want to go back.”

Bishop Daniel Flores of Brownsville met with a group of the children after Mass recently, Father Collins said.

“We’ve said for years that detention centers are not the way to handle illegal immigration,” Bishop Flores said in an interview with America. Law enforcement used to make a “prudential judgment,” he said, often releasing unauthorized entrants with an ankle monitor. Now, the zero-tolerance policy has led parents to be referred to criminal courts while their children wind up in the care of the Department of Health and Human Services.

“The parents do not know what’s happening to their children,” Bishop Flores said. “Once they get out of the court system, it is hard for them to locate their children. This is something [the local church in Brownsville] does every day—help parents find their children.”

In the Rio Grande Valley, the community wants to help, he said. The community recognizes that the immigrants are asylum seekers leaving cruel situations in their home communities, the bishop said.

“These kids are scared,” Bishop Flores said. “This is a pretty aggressive deterrence policy. You can’t use kids as a deterrent. You can’t use human beings that way.”

Secretary of Homeland Security Kirtsjen Nielsen defended the practice on June 18, explaining that by law her department cannot detain children with their parents. D.H.S. must either release both parent and child or separate them, she said.

“What can be more sacred than the family? It is torture to take the kids away.”

“We do not have the luxury of pretending all individuals claiming to be a family are, in fact, a family. We have to do our job,” she said in remarks at the National Sheriffs’ Association Conference.

The practice follows efforts by the Trump administration to curb both legal and illegal immigration. Last September, Mr. Sessions announced the termination of the Deferred Action for Childhood Arrivals program, an Obama administration policy that protected undocumented immigrants who came to the United States as children from deportation.

In April, Ms. Nielsen announced the administration would crack down on so-called loopholes available to those who seek asylum in the United States. Homeland Security has also ended Temporary Protected Status for U.S. residents from seven countries, including more than 250,000 Central Americans.

On Father’s Day, more than 2,000 people protested the separation of families in Tornillo, Tex., The Texas Standard reported. The border town is the site of the first “tent city” erected to house the increasing number of unaccompanied migrant children.

“We are horrified about what’s happening,” said Maria Elena Manzo, a leader with Communities Organized for Relational Power in Action. “What can be more sacred than the family? It is torture to take the kids away. I don’t know what could be worse.”

Ms. Manzo, a parishioner at Sacred Heart in Salinas, Calif., said many in the Salinas Valley are undocumented. They work in hospitality, agriculture and construction.

“We have a thriving economy because of immigrant labor in those industries,” said Ms. Manzo, who engages in dialogue with business, civic and community leaders as part of her work with C.O.P.A. “It is in our interest to figure out an immigration reform that keeps the people here.”

“‘What can I do?’ That’s what everyone needs to ask themselves. We can’t be paralyzed. We need to act.”

Business leaders want immigration reform because that means more profits, she said. “The sheriff wants people not to be afraid, so they can keep crime under control,” Ms. Manzo said, adding that she also engages officials from ICE in conversations.

“We can’t give into fear,” she said. “‘What can I do?’ That’s what everyone needs to ask themselves. We can’t be paralyzed. We need to act.”

In El Paso, activists are signing petitions and marching, according to the Rev. Bob Mosher, a Columban priest. Before beginning his work at the Columban Mission Center in the border city, Father Mosher spent nearly 30 years in Chile. He said one benefit of working under an oppressive regime is that it creates a sense of solidarity.

Father Mosher and other activists learned that border patrol agents were stopping asylum seekers on the bridge to El Paso. They would ask for their documents and when they asked for asylum, they would send them back, he said.

“I don’t think any Catholic can say we’re going to back the [Trump] administration no matter what it’s going to do.”

Last Friday, he joined a group of 20 activists who met six Guatemalan asylum seekers. They accompanied them across the bridge. “We got them through,” he said. “This is something we are doing. We meet [asylum seekers] early in the morning and accompany them across.”

“The church is looking for a humane way to enforce the borders and not hurt people who have been here for 20 or 30 years,” said Father Walsh said, the parochial vicar of Holy Trinity Catholic Church in Dallas. There are students in his community who fear the deportation of their parents, he said.

“In the long term, these kids will be damaged psychologically.”

“The border is a legitimate concern. Enforcing immigration laws is also legitimate,” he said. “But I don’t think any Catholic can say we’re going to back the [Trump] administration no matter what it’s going to do. There has to be a respect for human dignity and family unity.”

Father Walsh also pointed out that Congress has consistently promised immigration reform for years, yet nothing has come of it. “Now, families have been here for decades, and there’s a human situation there,” he said. “They shouldn’t just be kicked out.”

Speaking on the practice of separating children from their parents, the Rev. Pat Murphy, a Scalabrini priest who heads up the Casa Migrante shelter in Tijuana, Mexico, said, “In the long term, these kids will be damaged psychologically forever.”

In a way, that summarizes Bishop Flores’ approach to advocating for separated families: “Keep it real, keep it human, and keep it as focused as we can.”

“It’s all about the kids,” he said. “This began because we began prosecuting a misdemeanor charge [of unauthorized entry]. We don’t have to do it this way.”

Here the homepage where you can get online animal jam codes for gems and diamonds. You can also get other resources within minute.

There should be an attempt to settle people in a similar culture. It’s interesting that Catholic cultures are toxic to the migrants as they are supposed to seek asylum in the first country of entrance. This means the asylum claim is a sham and Sessions is right.

Where is the outrage at those who are sending these children and those who are encouraging this illegal activity. It's illegal because only a agreed upon number can come each year.

Why are the Bishops not going as a group to Capital Hill to denounce the separation of children at the border and demand Congress pass a single issue bill to stop this policy. This action would be inspiring to the nation. Otherwise, the Catholic hierarchy looks impotent as well as all talk and no action. Faith without good works is dead.

Excellent point! Surely nothing on their schedules can be more important than the lives of families.

Does anyone know if it's possible to send care packages or letters to the children?

Perhaps all of the pro-illegal immigrant, anti-Trumpers, especially the Catholic organization that aid and abet illegal activities, should study the historical actions of a past President and Secretary of State in
Border Politics and the Use and Abuse of History
By Victor Davis Hanson June 19 2018
"In 2014, during a similar rush, both Barack Obama (“Do not send your children to the borders. If they do make it, they’ll get sent back.”) and Hillary Clinton (“We have to send a clear message, just because your child gets across the border, that doesn’t mean the child gets to stay. So, we don’t want to send a message that is contrary to our laws or will encourage more children to make that dangerous journey.”) warned — again to current media silence — would-be asylum seekers not to use children as levers to enter the U.S."
All this faux outrage and non-stop media coverage was absent then as the progressive reporters and TV talking heads were in awe of the man who was going to stop the oceans from rising so,of course, he could stop children from entering America.

Further to my previous comment pictures taken in 2014 of Obama's immigrant children's interment camps,ignored or hidden by the administration and the subservient media are now available. at the:
dailycaller.com/2018/06/19/photos-obama-immigration-detention-facilities
How is it possible that what was obviously acceptable treatment of immigrant children "un-newworthy" four years ago is now used to attack the President? Where were all these Catholic organizations then who now protest too much?