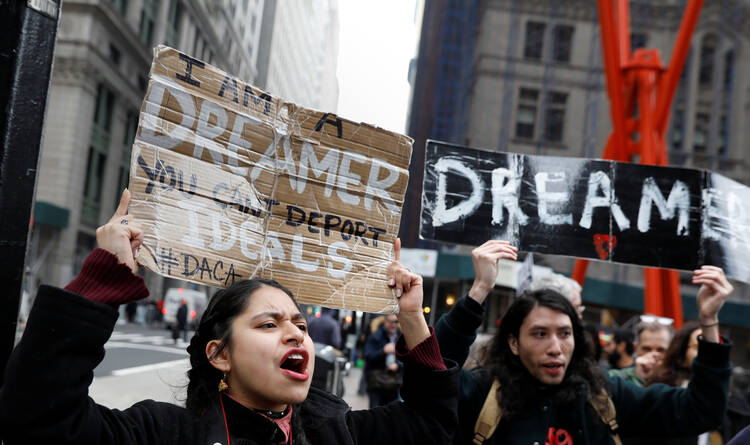 Activists and recipients of the Deferred Action for Childhood Arrivals, or DACA program, march up Broadway in New York City on Feb. 15 during the start of their "Walk to Stay Home," a five-day 250-mile walk from New York to Washington to demand that Congress pass a clean DREAM Act to save the program. (CNS photo/Shannon Stapleton, Reuters)

The U.S. bishops encouraged Catholics throughout the country to call their senators on behalf of Dreamers on Feb. 26.

Congress has not yet been able to find a legislative solution for Dreamers, undocumented immigrants who came to the United States as minors. An estimated 800,000 Dreamers have been allowed to stay in the United States under the Deferred Action for Childhood Arrivals, an Obama administration policy that protected them from deportation. Last September, the Trump administration announced the policy was ending on March 5.

“People’s lives and families’ futures hang in the balance,” said Archbishop José H. Gomez of Los Angeles, vice president of the U.S. Conference of Catholic Bishops. “Now is the time to pass legislation that enables the Dreamers to become citizens and full contributing members of our society.”

While hundreds of thousands are protected by DACA for now, the Center for Migration Studies in New York estimates that more than 2.2 million Dreamers are in the United States. Recent court decisions have temporarily blocked the Trump administration from ending DACA in March as it planned. But the rulings only affect DACA renewals and do not require that new applications to the program be accepted.

“Now is the time to pass legislation that enables the Dreamers to become citizens and full contributing members of our society.”

That includes the Supreme Court’s decision on Feb. 26 to decline to hear the challenges to DACA decisions, returning the issue to lower courts. Archbishop Gomez said the decision, while granting a reprieve, still leaves Dreamers facing an uncertain future.

“Congress has the responsibility to make immigration policy. It is long past time for members of Congress to take their responsibilities seriously—seriously enough that they are willing to act with courage to negotiate and seek compromises and resist the temptation to keep using this issue for their political advantage,” the archbishop said in a statement.

Archbishop Gomez called legislation for Dreamers the “first step” in addressing the nation’s broken immigration system. Beyond DACA, Congress also needs to “enhance security and the safety of our communities: and reform the visa system.”

“But what is urgent right now is for Congress to take action to protect the Dreamers,” he said. “Without it, these young people will lose their permission to work in this country and face deportation. This is wrong and it is up to Congress to make it right.”

[Sign up for Convivir, a new weekly newsletter that highlights the latest news, culture and trends related to Latino Catholics.]

Kevin Appleby, senior director of international immigration policy for the Center for Migration Studies, said the Catholic community needs to keep pushing for action on Dreamers “sooner rather than later.”

“The Supreme Court’s decision, while legally sound, was a tip of the hat to the Dreamers, as it gives Congress more time to address their situation,” he said. “Ironically, it relieves the urgency for Congress to address the issue, which keeps these young people in limbo and unable to plan their lives.”

Ashley Feasley, director of migration policy and public affairs for the U.S. bishops, said it is too early to tell what impact the national call-in will have but reports seeing positive results already.

“To my knowledge, it’s the first time the bishops have [asked Catholics to take part in a national call-in], certainly the first time on this issue,” she said in an interview with America. Ms. Feasley said the bishops were disappointed that Congress has not already acted on resolving the status of Dreamers, describing the debate as one “couched in terms of political gain.”

“We know of DACA priests, we know of leaders within parishes,” she said. “There’s a real uncertainty among young people who felt like they complied with the program and had a reprieve. Now that’s being taken away. It has created so much anxiety. There’s a real need to get this done.”

And after the recent court decisions, there is “more uncertainty, not less,” Ms. Feasley said. It is urgent that legislators find a bipartisan way forward, she said, noting that lasting solutions must recognize the dignity of the human person. Such measures will pave the way for more comprehensive reforms, she said.

Isaac Cuevas, associate director of immigration affairs for the Archdiocese of Los Angeles, reported positive results from the national call-in.

“We’re in the thick of it right now, but the call-in is going very well,” he said. “It’s an incredibly positive move by the bishops. The clear message is for the parties to put aside their bias and work together for a solution. This has nothing to do with politics and much more to do with the two million people who could be deported if nothing is done.”

The Ignatian Solidarity Network is ready to assist anyone interested in joining the call-in, even after Feb. 26, by contacting constituents with their congressional representatives.

Would the bishops accept permanent residence with no path to citizenship?

If for some reason I went to France or Mexico or Kenya and continued to live there and pay their taxes I would not expect to become a citizen but might want the right to live out my life there. Why do these illegal residents demand citizenship?

Also the ubiquitous bishops recommend and angry protestors photo. America must have a whole stock of these photos.