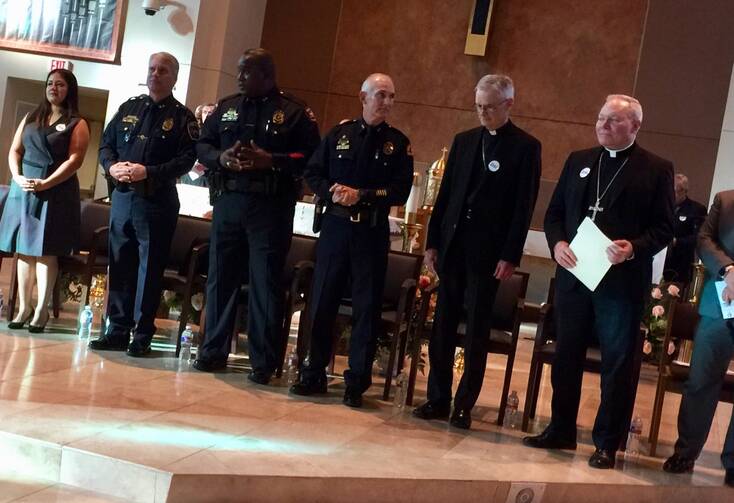 It has been a year since Texas passed S.B. 4, a measure that requires police and county sheriffs to cooperate with federal immigration enforcement. The measure also grants local law enforcement the right to question the immigration status of anyone they arrest.

A federal court blocked the implementation of the measure last August, but a three-judge panel of the U.S. Court of Appeals reversed that decision in March. All the while, the undocumented community in Texas has been living with increasing fear, according to the Rev. Michael Forge, pastor of Mary Immaculate Church in Farmers Branch.

“There are a lot of insecure people who are afraid to go to church,” he told America. “They are afraid of going to the grocery store or driving their kids to school.”

“They want to know who they’re talking to,” Father Forge said of police. “Well, we already issue our volunteers with ID cards, so we jumped on that.”

Father Forge, leaders of the Dallas Area Interfaith and more than 1,000 others met with law enforcement officials from Dallas and neighboring communities Carrollton and Farmers Branch, last November to see what could be done to quell fears. The problem, according to law enforcement, comes when individuals pulled over for traffic violations cannot identify themselves.

“They want to know who they’re talking to,” Father Forge said of police. “Well, we already issue our volunteers with ID cards, so we jumped on that.”

Police departments in Dallas, Carrollton and Farmers Branch agreed that officers could accept ID cards issued by Dallas Area Interfaith, the Diocese of Dallas and local parishes. The Dallas interfaith IDs have no legal bearing, so in each case, it remains up to the officer’s discretion whether to accept the card, which has a photograph of the individual, along with his or her name, address, date of birth and the name of the parish. That allows officers to write a ticket to the individual without arresting them, an act which could lead to deportation.

“It’s a way for the police officer to know who he’s talking to when he pulls someone over for a minor infraction,” Father Forge said. “It takes a little of the edge [off the anxiety of] the undocumented population. People realize that the police are not out to get them.”

Fear of deportation in the community has led to crimes not being reported to police, a challenge that local law enforcement has been trying to overcome.

“It goes back to building trust between community and police. If we don’t have that collaboration, our communities won’t be as safe as they could be,” said Josephine Lopez Paul, lead organizer with Dallas Area Interfaith, an affiliate of the Industrial Areas Foundation. The foundation has worked with the Catholic Campaign for Human Development to train leaders in the immigrant community in six other U.S. dioceses.

“Law enforcement can’t do its job if immigrants aren’t talking to police,” she said. “The ID won’t help you if you commit a felony.”

Adriana, an undocumented immigrant who chose not to reveal her last name, told America she is in the process of getting a parish ID because it is a near-formal identification document issued in the United States, not Mexico. Adriana, originally from the Mexican state of Morelos, has been in the United States for the last 23 years. After S.B. 4 was passed, she had been waiting for the deportations to begin.

“I thought it was going to be a matter of days,” said Adriana, a parishioner at San Juan Diego in Dallas. “I have a 7-year-old daughter, and I was afraid of how her life would change. I was crying every single day.”

“I have a 7-year-old daughter, and I was afraid of how her life would change. I was crying every single day.”

It is not safe in Mexico, she said, noting the nation’s high rates of kidnappings and incidents of women and girls disappearing. “I’m afraid, but I’m not paralyzed,” she said. “I’m just trying to do the next thing.”

Claudia, a parishioner at Mary Immaculate who also chose not to reveal her last name, said many immigrants do not have identification. She said having a parish ID helps immigrants demonstrate they are “good people, that they go to church, so the police know who they are and where they live.”

“A lot of people feel more peaceful since our pastor [Father Forge] and the bishop of Dallas [Edward J. Burns] are standing behind our people,” Claudia said. “This helps our people feel like we are not criminals. It recognizes us as a people that help the community where we live.”

Not everyone has been pleased with the ID program. Father Forge told of a gentleman who would not shake his hand at the gym after reading an article about the effort in the Dallas Morning News.

“The environment here is charged with anti-Hispanic sentiment already,” Father Forge said of Farmers Branch. “But the city has done a lot in the last three, four years to move beyond that perception.”

His parish, which Father Forge describes as diverse with 1,000 Hispanic parishioners, has been completely supportive of the effort.

“We do not charge for this at all, and we don’t ask for a donation or anything. The cost is nominal anyway,” Father Forge said, adding that the parish has issued 400 IDs in the last six weeks. “As a parish, we don’t discriminate. I don’t care if they’re Catholic or not Catholic, or if they’re parishioners.”

One gentleman who lives four hours away is driving over to get an ID. And people who are not undocumented are also signing up for them.

Father Forge told the story of a woman in her late 20s who wanted an ID. Through the process, per protocol, she was asked to prove her identity. She pulled out her U.S. passport.

“Norma, you’re a U.S. citizen. You don’t need this,” Father Forge told her.

She shrugged her shoulders.

Then the priest realized what was happening. “Even as a U.S. citizen, she felt like she didn’t belong,” Father Forge said. Seniors are signing up for IDs for the same reason.

The ID program, he said, is more than just a way for undocumented immigrants to demonstrate their identity to police. It has become a way for parishioners to feel welcomed by the church.

This story has been updated to include more detail about the work of the Catholic Campaign for Human Development.

"It is not safe in Mexico, she said, noting the nation’s high rates of kidnappings and incidents of women and girls disappearing. “I’m afraid, but I’m not paralyzed,” she said. “I’m just trying to do the next thing.”"

Hmm....this is a reasonable and good temporary measure, but shouldn't the Church be doing something about the level of immorality in Mexico, a supposedly Catholic nation? Then maybe people wouldn't need to become refugees.

Undocumented means illegal. Does the Society of Jesus support and enable illegal activity?

It's called "civil disobedience," and it responds to a HIGHER law than the evil, immoral American one.

It's also called a lack of obedience and a disrespect for authority, and it can and does destroy civilizations.

This is a very complex issue. We must remember that there is an enormous distinction between illegal and immoral. I understand that "undocumented" in this case means "here illegally". However, the people we're talking about are individuals. This does not necessarily mean that they are doing something WRONG. As I said, it's complex.

If it is no longer wrong to break the law, then I would suggest that civilization itself has lost its foundation stones.

I’m glad that when the Holy Family fled to Egypt, they weren’t deported. Matthew 2:13