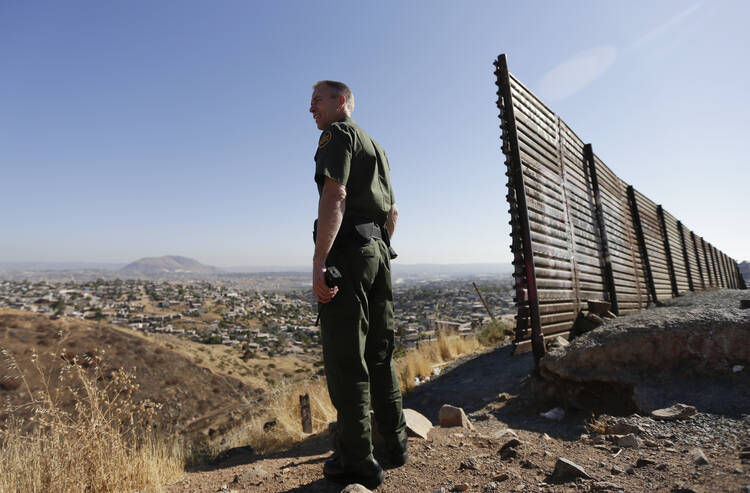 In this June 13, 2013 file photo, US Border Patrol agent Jerry Conlin looks out over Tijuana, Mexico, by the old border wall along the US - Mexico border, where it ends at the base of a hill in San Diego. (AP Photo/Gregory Bull, File)

“I have no doubt that many of those crossing our border illegally are leaving difficult situations,” Mr. Sessions said on May 7, noting that border apprehensions had tripled in March and April over last year’s numbers. “But we cannot take everyone on Earth who is in a difficult situation.”

To carry out the policies, Mr. Sessions sent 35 prosecutors and 18 immigration judges to the Southwest, though experts expect the new policy will add to backlogs.

Attorney General Jeff Sessions has vowed to prosecute anyone who enters the United States illegally.

“It’s going to exact a toll on the people themselves, the system and the taxpayers,” according to Jeanne Atkinson, the executive director of the Catholic Legal Immigration Network. There are currently more than 657,000 immigration cases pending, according toSyracuse University.

Being in the country illegally is a civil offense. While crossing the border illegally is a crime, past administrations did not pursue prosecutions in every case. Criminal immigration prosecutions have been on a steady decline since 2013. Lack of resources and detention space make prosecuting everyone who enters improperly unrealistic.

“When you think about prosecutors, they use discretion for a reason. You can’t prosecute everyone who violates the law,” Ms. Atkinson told America. “Illegal entry is a misdemeanor. [The administration] is choosing to be extremely aggressive. They’re adding resources to the criminal court system, which is going to be increasing the cost of incarceration.”

While crossing the border illegally is a crime, past administrations did not pursue prosecutions in every case.

Mr. Sessions also said that children who enter illegally will be separated from the adult who accompanies them, whether the adult is a parent or a smuggler.

“To compare parents who are attempting to save their children’s lives with smugglers and to criminalize them is shameful,” Kevin Appleby, the senior director of international immigration policy for the Center for Migration Studies, told America in an email. “The administration has reached a new low with this policy.”

Asylum seekers do not break the law when they cross the border and ask for protection, he said. The United Nations prohibited asylum seekers from being detained simply for seeking asylum, according to its 1951 convention. It also recognized that seeking asylum may require individuals to “breach immigration rules.”

“Our government is required by domestic and international law to provide due process to asylum seekers, who are seeking protection from persecution. To circumvent the process undermines our laws and values, which weakens our democracy and the common good of all,” Mr. Appleby said.

“To compare parents who are attempting to save their children’s lives with smugglers and to criminalize them is shameful.”

“This policy is consistent with this administration’s ongoing attack on legal immigrants, as asylum seekers who ask for protection are within their legal rights and have not broken the law,” he said. “To make matters worse, they are picking on the most vulnerable of migrants, woman and children.”

The new policy follows efforts by the Trump administration to curb both legal and illegal immigration. Mr. Sessions is currently reviewing a case that could impactvictims of religious persecution. The Justice Department also toyed with canceling a Bush-eralegal aid program for immigrants.

Under the Trump administration, Homeland Security has also endedTemporary Protected Status for U.S. residents from seven countries, including more than 250,000 Central Americans. The Trump administration also ended the Central American Minors Program, which allowed minors to apply for refugee status while still in their home country. These developments will further destabilize the region and push more immigrants to flee their home countries, according to Ms. Atkinson at CLINIC.

“People throughout history have migrated. But for the most part, people stay home,” Ms. Atkinson said. Those who do migrate are often fleeing danger or cannot feed their families in the country of origin, she said. “You think we could find a way to stabilize Central America so immigrants are not forced to make these the drastic choices.”

You think we could find a way to stabilize Central America so immigrants are not forced to make these the drastic choices.

Try the approach that works. It is used rarely in Latin America.

To separate children from their parents simply because they crossed the border illegally is cruel and unusual punishment for a misdemeanor offense. This is a disgrace to our country.

If the immigration laws aren't being followed as is, this sounds like a good one to encourage compliance and self-regulation. Self-regulation saves taxpayer money and keeps families together. Win-win.

Every day in this nation, in every international airport in the USA, foreign nationals arrive on visas, as families, and disappear into the nation, never to leave again. That fact points up some invidious issues – economic status, race, national origin – as determinative of who gets to remain here undocumented and unmolested and who doesn’t. When the same tenacity is applied to those entrants into the nation as are being proposed for the border with Mexico I would be much less disturbed by the rhetoric on protecting our borders.

The deliberate and premeditated separation of children from adults, except for their physical or psychological safety and well-being, is at the least violative of family values and at worst, in my opinion, immoral.