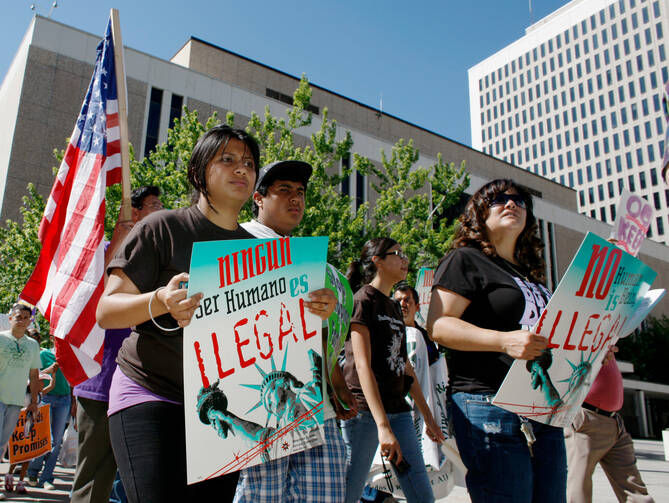 Plans to halt a Bush-era legal program have been suspended, at least for the moment.

The Justice Department had planned on temporarily halting the Legal Orientation Program, which President George W. Bush put into place in 2003 to help detained immigrants know their rights and legal options while facing deportation proceedings.

Yesterday, however, Attorney General Jeff Sessions said the Justice Department would no longer pause the program while it is reviewed. Mr. Sessions announced the change during his opening statement in a Senate Appropriations subcommittee.

“I look forward to evaluating the findings and will be in communication with the committee when they are available,” he said.

The news was welcomed by those who administer the assistance to immigrants, including eight Catholic Charities programs. Nationally, the $8 million program serves 50,000 people a year in 38 large detention centers.

“It’s definitely good news for us now,” said Patricia Ortiz, program director of Esperanza Immigrant Rights Project, a program of Catholic Charities of Los Angeles. Esperanza had been receiving $500,000 a year to serve 6,000 immigrants in Southern California through the Legal Orientation Program and the Immigration Court Help Desk.

“But we’re concerned about what will come down the line,” she quickly added in an interview with America, explaining her concern that the review will not be fair. “We don’t have a sense of how they’re going to do the review. All of us providers are keeping an eye on it.”

“Vulnerable detainees will continue to get important information about their rights and legal options,” Mr. Gauto said.

Ms. Ortiz added that previous reviews found the program was “an effective tool for all parties involved,” including Immigration and Customs Enforcement and the immigrants themselves. In 2012, the Justice Department study found the program saved the federal government nearly $18 million a year.

Ms. Ortiz attributed the change of course to advocacy.

A Bush-era legal aid program for immigrants is about to be cancelled
J.D. Long-García

“We were reaching out to our local representatives, there were letters sent, and I think that paid off,” she said. “But now, that doesn’t mean we’re off the hook. We still have to be aware of what’s going on with that program.”

“Vulnerable detainees will continue to get important information about their rights and legal options,” Mr. Gauto said in a statement from CLINIC. “Immigrants who receive Legal Orientation Program assistance are more likely to get legal counsel. And people who have legal counsel are more likely to obtain relief in immigration court.”