Deep Dive: Sex Abuse in Australia and the campaign against celibacy and the seal of confession 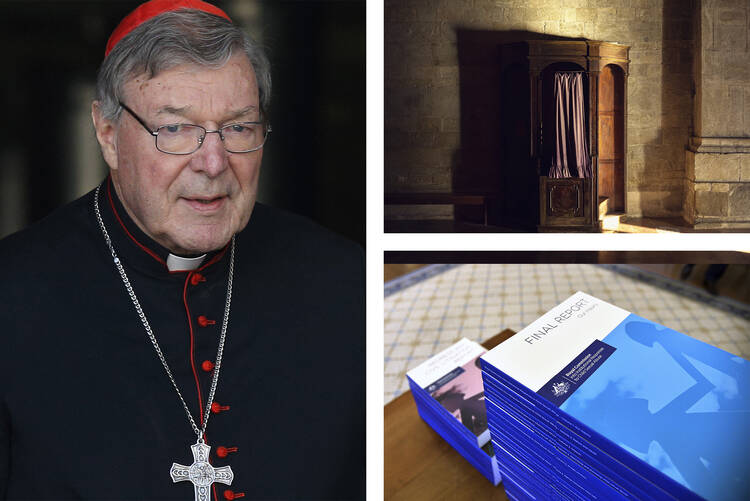 On Friday Dec. 15 an Australian commission assigned to investigate child sexual abuse recommended that the Catholic Church lift its demand of celibacy from clergy and that priests be prosecuted for failing to report evidence of pedophilia heard in the confessional.

America has been writing on the issues relating to the commission’s recommendations for a number of years, and has argued strongly against any infringement on the seal of the confessional and attempts to link sexual abuse and celibacy. Here’s a guide to our news and analysis on the Australian sexual abuse crisis, priestly celibacy and the seal of confession.

Cardinal Pell admits that church made ‘enormous mistakes’ in dealing with abuse cases, by Gerard O’Connell

It’s not about celibacy: Blaming the wrong thing for sexual abuse in the church, by James Martin, S.J.

Why does the Catholic Church require its priests to be celibate, and is this going to change?, by Zac Davis

The Seal of Confession

When priests hear about sex abuse in confession, should they be forced to report it?, by Helen Costigane

A threat to the confessional seal anywhere is a threat to it everywhere, by The Editors

The Catholic Church has a homosexual NAMBLA problem among a percentage of its priests. Tolerance of homosexual leadership had led to abuse of minors and bankruptcies of many dioceses. Cardinal Pell doesn’t strike me as a homosexual pederast, I predict he’s innocent of the charges being brought against him.

Governments cannot properly run churches. The government expectation that the church should change its celibacy requirement for priests is wrong. Confession would not be terribly useful if it was subject to legal requirements to report what was heard, even though it is hard to defend remaining quiet about a confession of sexual abuse of a child.