The Editors: A threat to the confessional seal anywhere is a threat to it everywhere 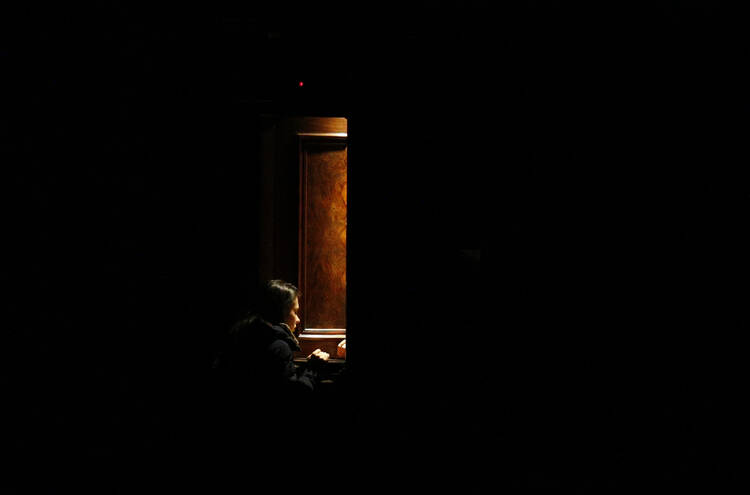 A woman goes to confession in darkness at the start of the Easter Vigil led by Pope Francis in St. Peter's Basilica at the Vatican March 26. (CNS photo/Paul Haring)

In a scene reminiscent of many Hollywood movies, Archbishop Denis Hart of Melbourne has announced that he would rather go to prison than report an allegation of sexual abuse he heard during a sacramental confession. “It is a sacred trust,” Hart told a radio station in Melbourne on Aug. 15. Archbishop Hart’s defense of the confessional seal was prompted by a report released the day before by Australia’s Royal Commission into Institutional Responses to Child Sexual Abuse that included a recommendation to criminalize priests’ failures to report sexual abuse heard during confession. While the commissioners noted the Catholic mandate that the seal never be broken, “we heard evidence of a number of instances where disclosures of child sexual abuse were made in religious confession, by both victims and perpetrators,” the report added.

In 2012 in Ireland, horror at the extent of sexual abuse of minors (as well as a gimlet eye toward a church that had long operated with a heavy hand in Irish civic life) led legislators to propose a similar law. Here in the United States, legislative battles have been waged from Louisiana to Massachusetts to California over “confession carve-outs” in laws that allow for exemptions to mandated reporting for sacramental confessions.

When priests hear about sex abuse in confession, should they be forced to report it?
Helen Costigane, S.H.C.J.

Such stories always draw media attention, in part because of our cultural obsession (and not just among Catholics) with the mysteries and terrors of the confessional box. Nary a cop drama has existed in the history of television without a police officer hiding in a confessional to hear evidence of a crime. Alfred Hitchcock’s 1953 film “I Confess” has as its major plot point a priest who hears a murderer’s confession; the 1994 film “Priest”also features a cleric who is unable to act on a confession of sexual abuse because of the inviolability of the seal.

To the secular mind, the confessional seal is madness—a loophole in the law, a violation of state neutrality with regard to religion, a “medieval law” (to quote a member of the Australian Parliament), a tool for institutional corruption and coverup. And who, after all, wants to see abusers hide behind the sacraments?

For the Catholic Church, however, the issue is different. “The sacramental seal is inviolable,” says the 1983 Code of Canon Law, and it is “absolutely forbidden for a confessor to betray in any way a penitent in words or in any manner and for any reason.” While a priest can, and in cases where abuse is occurring should, ask a penitent to approach him “outside the sacrament” and report the abuse separately, or encourage (without compelling) an abuser or abuse victim to take his or her story to the police, to violate the sacramental seal not only incurs upon the priest an automatic excommunication, it also damages the trust of the penitent. On a sacramental level, it can hardly be otherwise—true repentance and true forgiveness are not possible if the penitent is not free to offer the former and receive the latter; and the whole point of confession is not only to communicate God’s forgiveness, but to free the penitent of the burden of his or her sin.

If some crimes should be reported, what is the definition of a crime that should not be reported?

However well intentioned, on a practical level, it is easy to see how quickly one breach of the seal of the confessional will not only diminish the promise of sacred confidentiality on which every penitent relies, but will likely lead to a collapse of all legal protections for it. The impetus behind proposed exemptions to existing law is the conviction that the sexual abuse of minors is a crime so heinous it should not be protected by the seal. But once priests are mandated to break the seal for this crime, what is to stop various judges and attorneys from concluding that murder, too, is a crime so heinous it should not be protected? What about corporate crimes that result in the defrauding of millions? If some crimes should be reported, what is the definition of a crime that should not be reported?

The Australian bishops are right: A violation of the confessional seal anywhere will become the rationale for mandating its violation everywhere.

Is it not the case that if a defendant tells his lawyer that he did commit the crime or other crimes the lawyer cannot tell the police/prosecutor.

A very difficult stand for the Church, but one that seems must be
taken.

If a known penitent to a priest confesses to be the serial killer that has been plaguing the neighborhood, but tells the priest he is sorry for his sins and will sincerely try not to kill again, does the priest have an obligation to disclose this to law enforcement? Does your answer change if more serial killings continue after a few months and it is the priest's strong opinion that the person he knows is the serial killer?