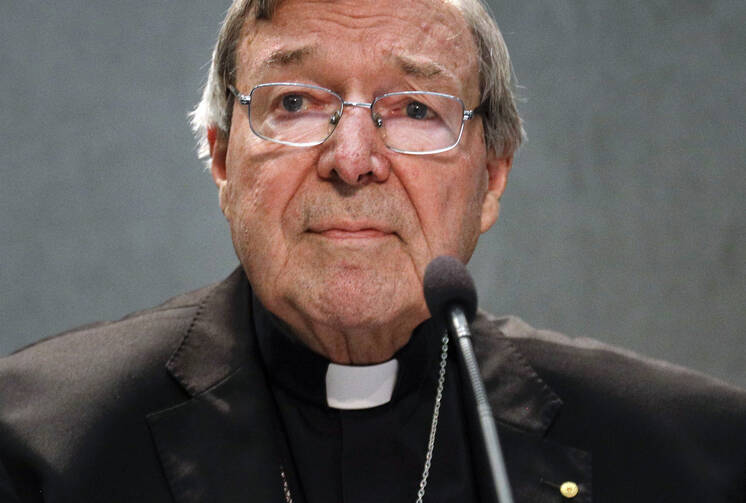 SYDNEY (AP) — Cardinal George Pell, the most senior Catholic official to face sex offense charges, was jeered by protesters as he made a court appearance in his native Australia on Friday in a case that has rocked the Vatican and placed scrutiny on the pope's stance against abusive clergy.

Australia's highest-ranking Catholic and Pope Francis' top financial adviser, Pell entered the Melbourne Magistrates Court flanked by police and media as a small group of placard-waving protesters yelled from the sidewalk. He did not react to the hecklers.

The 20-minute hearing focused on planning for the committal hearing starting March 5 that will determine whether he goes to trial. As many as 50 witnesses could be called for that proceeding, expected to last a month.

Pell, who remained silent throughout, has been charged with multiple offenses involving multiple complainants. The exact detail and nature of the charges have not been disclosed to the public, though police have described them as "historical" sexual assault offenses, meaning they are alleged to have occurred years ago.

Pell through his lawyer has vowed to fight the charges.

Pell through his lawyer has vowed to fight the charges. The 76-year-old cardinal has taken leave from his position as Vatican treasurer to return to Australia and defend himself. He has not been required to enter a plea in court, though his attorney said at his first court appearance in July that Pell intended to plead not guilty.

Pell's attorney, Robert Richter, told Friday's hearing at least one of the allegations could not have happened.

“We propose to demonstrate to Your Honor that what was alleged was impossible,” Richter told magistrate Belinda Wallington.

Today's brief hearing centered on which witnesses would be cross-examined at the committal hearing, and touched on a factor likely to feature prominently in the case — the memories of witnesses speaking about incidents alleged to have occurred up to several decades ago.

Richter pointed out one witness had given police a “vague” statement. Wallington noted the man was age 11 at the time.

The case places both the cardinal and Pope Francis in potentially perilous territory.

"This trial is a very important display that the days of special privileges for high-ranking religious officials are finished and gone," she said.

After years of alleged cover-ups and silence from the church over its pedophilia scandal, abuse survivors and their advocates have hailed the prosecution of Pell as a monumental shift in the way society is responding to the crisis.

So far, Pope Francis has withheld judgment of Cardinal Pell.

The case places both the cardinal and Pope Francis in potentially perilous territory. For Pell, the charges are a threat to his freedom, his reputation and his career. For Francis, they are a threat to his credibility, given he famously promised a "zero tolerance" policy for sex abuse in the church. Advocates for abuse victims have long railed against Francis' decision to appoint Pell to his high-ranking position in the first place; at the time of his promotion in 2014, Pell was already facing allegations that he had mishandled cases of clergy abuse during his time as archbishop of Melbourne and, later, Sydney.

So far, Francis has withheld judgment of Pell, saying he wants to wait for Australian justice to run its course. And he did not force the cardinal to resign. Pell said he intends to continue his work as a prefect of the church's economy ministry once the case is resolved.

In recent years, Pell's actions as archbishop came under particular scrutiny by a government-authorized investigation into how the Catholic Church and other institutions have responded to child sex abuse. Australia's Royal Commission into Institutional Responses to Child Sexual Abuse — the nation's highest form of inquiry — revealed earlier this year that 7 percent of Catholic priests were accused of sexually abusing children in Australia over the past several decades.

In testimony to the commission last year, Pell conceded that he had made mistakes by often believing priests over accusers. And he vowed to help end a rash of suicides that has plagued abuse victims in his hometown of Ballarat, near Melbourne in Victoria state.

But over the past year, the allegations against Pell moved beyond the way he had handled cases of clergy abuse to accusations that he, himself, had committed abuse. Australian detectives flew to the Vatican to interview him last year and he was formally charged in June.