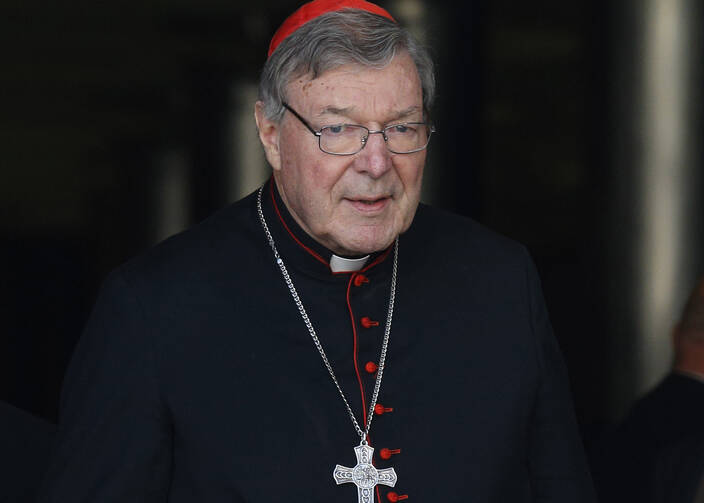 “I’m not here to defend the indefensible. The church has made enormous mistakes and is working to remedy those, but the church has, in many places, and certainly in Australia, has mucked things up and let people down,” Cardinal George Pell told Australia’s Royal Commission into Institutional Responses to Child Sexual Abuse on Feb 28.

He was giving evidence on the first of three (and possibly four) days of public hearings by video-conference from the Quirinale Hotel in Rome to the commission meeting in Sydney. He was responding to questions about what he thought about the Catholic Church’s handling of this kind of abuse.

There were some 120 people in the room where the cardinal gave his evidence. Among them were a group of 15 survivors who had travelled from Australia to watch him give testimony. Also present were some clerical friends of the cardinal and 60 members of the international media. The commission gave Cardinal Pell, 74, the possibility of giving testimony by video-link for reasons of health related to his serious heart condition. It was his third appearance before the Royal Commission. Wearing a black suit and clerical collar, he held a bible and swore “to tell the truth, the whole truth and nothing but the truth.”

In three and a half hour’s testimony, the cardinal answered many questions with clarity, but several times told the commission he did not have a clear recall on specific persons or events since these events happened some 30-40 years ago.

He described his role as advisor to the pope and head of the Secretariat for the Economy, but denied that he is number three in the Vatican hierarchy. He explained that it is not within his brief to set aside money to assist poor dioceses in compensating survivors. He denied recent media reports that misleadingly asserted that new guidelines had been issued by the Vatican to bishops telling them they were not obliged to report cases of abuse to the state authorities, and said the Holy See’s guidelines state clearly that they have to abide by the law of the country where they live. He told the commission that in the early 1970s the “general practice” in the church was not to report allegations of abuse to the police, this was seldom “encouraged” but not impeded. He went onto defend the great improvements made by the Catholic Church in Australia, through the Melbourne Response and Towards Healing protocols, to assist survivors of abuse, and prevent it happening again. “There are very few countries in the world that have advanced as far as the Catholic Church in Australia in putting procedures into place nearly 20 years ago,” he stated. He expressed his view that for the most part “the faults” were due to “personal faults, personal failures, rather than structures.”

The counsel for the commission sought to walk Cardinal Pell through his early life as a student, seminarian and priest and questioned him about certain people he knew who may have had knowledge of the abuse of children by clergy or religious. Responding to questions, Cardinal Pell confirmed that in the early period of his priestly ministry, in the 1970s, like most people, he was “strongly inclined” to believe the priest who denied allegations of pedophilia rather than the child victim reporting this abuse. He admitted that the tendency among the clergy (bishops and priests) was to protect the institution’s good name above all else in those years, not its assets. He denied having solid information of the abuse of children by Msgr. John Day (a priest in the next parish, 200 km away) until the news was broken in the press in 1972.

Interrogated by the counsel on what he knew about the abuse of children by Christian Brothers in schools run by them in Ballarat between 1973 and 1984, he recalled only “fleeting references” to one of the brothers involved. When asked about another brother who was known to kiss children, he asserted that the general view then was that this was “harmless enough.” He confirmed that “a significant number of people” knew that some Christian Brothers were offending children in their schools.

The last line of questioning for this first hearing focused on what the cardinal—then a young priest in Ballarat—knew about Gerald Risdale, one of the most prolific abusers in Australia who was later convicted on many counts of sexual abuse of children in western Victoria. Cardinal Pell lived with Risdale for almost one year in a parish presbytery in his home city. He told the commission that he knew that Risdale had taken groups of boys on camps and overnight trips and while he considered that “unusual” he did not think it “improper” because there were several boys on such events, not just one.

The cardinal stated that in those years he had no knowledge that the bishop of Ballarat, Ronald Mulkearns, had information about allegations against Risdale in the 1970s and 1980s. He denounced the way Bishop Mulkearns dealt with Risdale as “a catastrophe for the victims and a catastrophe for the church.” He acknowledged that “if effective action had been taken earlier an enormous amount of suffering would have been avoided.” He said the bishop transferred Risdale from one place to another, “gave him chance after chance” and trusted excessively “in the possible benefits” of psychological help for his pedophile behavior.

David Risdale, the priest’s nephew who was abused by him, was present at the hearing in Rome, as were the parents of a young woman victim who committed suicide, and a man who had also attempted suicide as a result of his traumatic experience. Cardinal Pell has offered to meet with the survivors and relatives of the victims, but so far they have not indicated their desire for such an encounter.

Cardinal Pell will resume his testimony at 10 p.m. (Rome time) this evening, Feb. 29, and end at 2 a.m. on March 1. The hearings are scheduled to continue on Tuesday and maybe also Wednesday, March 2 and 3.  Lawyers for the survivors are expected to question him in these next sessions.

Gerard O’Connell
@gerryorome
Show Comments (
1
)
Comments are automatically closed two weeks after an article's initial publication. See our comments policy for more.
Lisa Weber
6 years 9 months ago
Cardinal Pell deserves more blame for the situation of allowing children to be abused because he was responsible for dealing with abuse, but the truth of the matter is that he was doing exactly the same thing that probably hundreds of other people were doing - turning a blind eye to abuse because the victims were powerless. To speak up against abuse invites retaliation, so most people try to stay in a place of "plausible deniability."