What you need to know about this year's Catholic bishops’ meeting 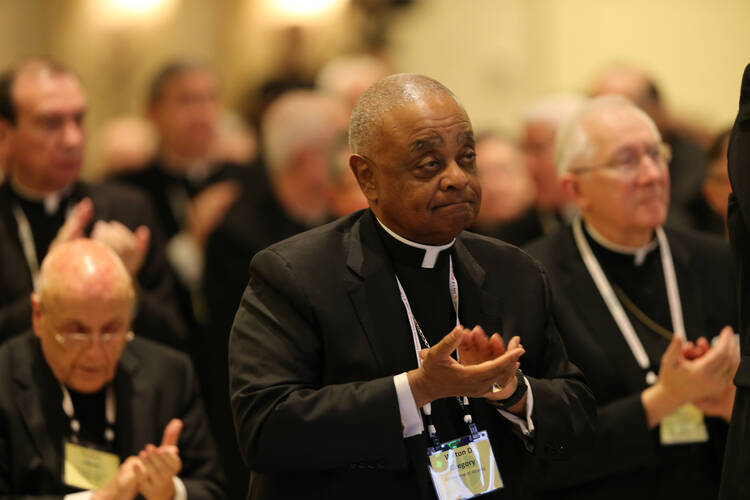 Atlanta Archbishop Wilton D. Gregory, center, and other prelates applaud on Nov. 14 after an address by Archbishop Christophe Pierre, apostolic nuncio to the United States, during the annual fall general assembly of the U.S. Conference of Catholic Bishops in Baltimore. (CNS photo/Bob Roller)

Click here for live updates on the bishop’s gathering in Indianapolis.

In the Detroit-area, fear is spreading among Michigan's sizable Middle Eastern Christian community as federal agents conducted immigration raids this week that could result in the deportations of Christians facing persecution back in Iraq. Meanwhile, in Washington, Republican senators are reportedly finalizing a bill that, if passed, could strip millions of Americans of health insurance. And governors and mayors throughout the country are still figuring out what role the nation will play in protecting the planet as the United States begins withdrawing from the Paris climate accords.

Against this backdrop, Catholic bishops of the United States will gather in Indianapolis on June 14-15 for their annual spring meeting, where, like millions of ordinary Americans, they will discuss the burning political issues of the day and consider what they can contribute to the conversation. Some of the issues on the agenda—immigration and health care specifically—have already caused a great deal of tension between the White House and Catholic leaders, while others, such as religious freedom, present an opportunity for collaboration.

Some of the issues on the bishops’ agenda—immigration and health care specifically—have already caused a great deal of tension between the White House and Catholic leaders.

In the six months of Mr. Trump’s presidency, the body representing the nation’s more than 400 bishops has repeatedly expressed disappointment with several of his priorities. Through statements and interviews, Catholic bishops have cheered court decisions blocking Mr. Trump’s self-described travel ban targeting majority-Muslim nations, condemned his plan to erect a wall along the U.S.-Mexico border and challenged his support for repealing Obamacare.

More recently, bishops called his decision to withdraw from the Paris climate accord “deeply troubling” and expressed concern over how the president’s proposed budget may impact the social safety net.

On the other hand, bishops are also discerning where they might share common ground with Mr. Trump, with the church’s views on religious liberty, anti-Christian persecution and abortion seeming to align with the president’s. In those areas, there have already been signs that church leaders are willing to work with the White House.

Last month, Cardinal Donald Wuerl and Cardinal Daniel DiNardo were on hand for a Rose Garden signing ceremony of an executive order that Mr. Trump said will bolster religious liberty in the United States. (In addition to ordering the I.R.S. not to investigate churches that engage in partisan politics, it also directs the Department of Health and Human Services to devise regulations that could allow employers with objections to providing insurance coverage for contraception to opt out of Obama-era laws.) During their Indianapolis meeting, bishops will consider making permanent an ad hoc religious liberty committee. That would mean initiatives meant to promote religious freedom, such as the Fortnight for Freedom, which started as a protest against Obama-era health care regulations, could become permanent.

On the abortion front, some bishops have praised decisions by the Trump administration to reinstate a rule that prevents federal dollars from funding abortions overseas and to support efforts to allow states to defund Planned Parenthood clinics.

When it comes to international religious freedom, it is unclear how Mr. Trump will follow through on campaign promises to assist Christians facing religious persecution in the Middle East. Mr. Trump discussed that issue with Pope Francis during their Vatican meeting in May. A White House statement following the meeting said the pair discussed “how religious communities can combat human suffering in crisis regions, such as Syria, Libya, and ISIS-controlled territory.”

“The President affirmed that the United States and the Holy See share many fundamental values and seek to engage globally to promote human rights, combat human suffering and protect religious freedom,” it continued.

Earlier this month, Vice President Mike Pence sought to assure Catholic leaders that they have a partner in the White House, pointing to the Trump administration’s stance on abortion and religious freedom. Addressing the National Catholic Prayer Breakfast, Mr. Pence proclaimed, “American Catholics have an ally in President Donald Trump.

“Protecting and promoting religious freedom is a foreign policy priority of this administration,” he continued, though he did not offer specifics on how the administration would fulfill the promise. During his speech, Mr. Pence did not address other issues bishops have identified as priorities, such as immigration, health care, poverty or climate change.

In addition to political issues, bishops also plan to discuss how the church in the United States is preparing for a 2018 Vatican meeting about young people in the church and will celebrate a Mass intended to promote prayer and penance over the church’s mishandling of clergy sexual abuse.

To make the Fortnight for Freedom program permanent would, in my opinion, be a serious blunder. That program helped elect Donald Trump, who is not by any stretch of the imagination a pro-life person. He is manipulating pro-life voters; how do his policies on immigration, on health care, on the budget, on the climate, on the wall with Mexico fit into a pro-life agenda? The Fortnight for Freedom program made it appear to many Catholics that the Obama administration was against religious freedom, when in reality the administration tried its utmost to placate religious objections to the contraceptive mandate. Too often during the Obama administration Catholic leaders linked contraception with abortion, when in reality studies have shown that easy access to contraception significantly reduces the number of abortions. I find it especially disturbing to see Catholic leaders raising the issue of religious freedom when the official Catholic Church did not support religious freedom until the Second Vatican Council. Finally, if Catholic leaders are so concerned with religious freedom, then they must vehemently oppose President Trump's attacks on the Muslim community.

The fact that more than a few bishops supported Trump in his campaign for the presidency destroyed much of the credibility of the entire group in my estimation. Trump's corruption and incompetence were obvious long before his election, so whining about it now that he is in office fails to impress me.

The Church will never be able to speak authoritatively about issues related to sexuality until married women are included in formulating related doctrine and authoring official statements of the Church. Men and women see and understand issues of sexuality differently. When men issue one-sided pronouncements about sexuality, women can only dismiss what is not true for women. The bishops should not claim to speak for the entire church when they are speaking only for men and probably only for ordained men. There are sound reasons for people saying that they generally ignore what the bishops say - a primary one is that what they say about sexuality is so often wrong.

“In the six months of Mr. Trump’s presidency, the body representing the nation’s more than 400 bishops has repeatedly expressed disappointment with several of his priorities.”

I can’t imagine Mr. Trump would have any reaction to what Mr. O’Loughlin describes as “disappointment” by US Catholic Bishops. While Trump probably knows well that white USA Catholics represented a significant demographic in his election, I think that he also knows even better that that particular demographic agrees heartily with his policies toward which their Bishops express “disappointment”.

If their preaching, when it even happens, has no positive transformative effect on their churchgoers, why do they think they will have an effect on the President?

It's hard to imagine the Bishop's Conference as a credible, unified body, let alone one that speaks in an instructive way to the laity--particularly in matters involving the electorate. Instead, it looks very much like a type of campaign where populist forces and the church's own sense of tribalism compete with its better angels from Gaudium Et Spes to Laudato Si.
In short, it needs new windows to be opened and a new way of speaking. This is precisely a moment for a prophetic church to speak truth to power. Otherwise, we've seen these re-runs. What we need is transformation.

I love that the bishops never fit into a political box and are able to transcend left/right American mindset.

How can we talk about finding common ground with the current administration when they are doing so much to demonize the vulnerable and the poor. A church who bargains with the devil is a church that risks losing its soul. Careful church leaders, there may be no turning back.

How much of what the bishops, America magazine authors and commenters here supposedly object to is fake news.

Similarly stories on the budget and the Paris Climate agreement are also fake News.

Why does Mr. O'Loughlin perpetuate such myths? Maybe this should be the debate instead of just regurgitating political talking points.