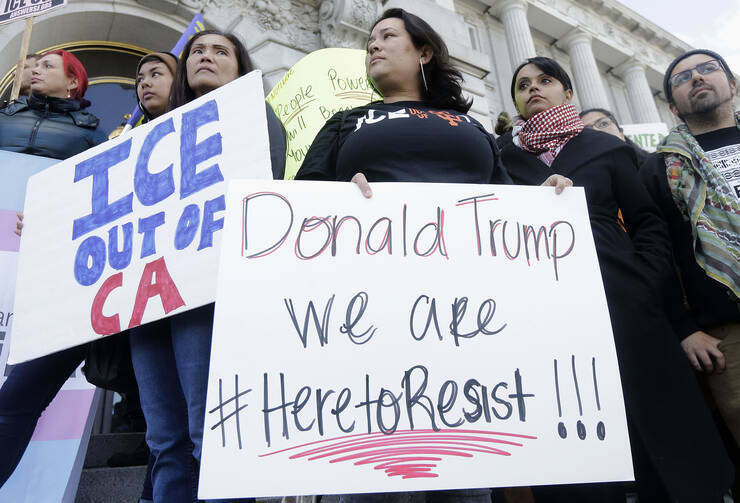 One of the Catholic Church’s newest cardinals used strong words to condemn President Donald Trump’s threat to pull federal money from U.S. cities and counties that provide sanctuary to undocumented immigrants, calling it “the opposite of what it means to be an American.”

“Closing borders and building walls are not rational acts,” Cardinal Joseph W. Tobin of Newark said in a statement on Friday. “Mass detentions and wholesale deportation benefit no one; such inhuman policies destroy families and communities.

“In fact, threatening the so-called ‘sanctuary cities’ with the withdrawal of federal funding for vital services such as healthcare, education and transportation will not reduce immigration,” the newly-installed archbishop of Newark continued. “It only will harm all good people in those communities.”

Many elected leaders have said they will fight Mr. Trump’s order, but the mayor of Miami-Dade County announced on Jan. 25 that his jurisdiction would abide by federal law, drawing praise from the president on his Twitter account.

Cardinal Tobin, who was given a red hat by Pope Francis in November, said Americans are entitled to feel safe, adding the “federal government should continue a prudent policy aimed at protecting citizens.”

But he also said the nation “has a long and rich history of welcoming those who have sought refuge because of oppression or fear of death.” He pointed to past waves of migration from places such as Canada, Europe and Vietnam, which "we have welcomed and helped to find a better, safer life for themselves and their children in America.”

In a statement released on Jan. 26, Bishop Vásquez said that he understood the need to curb crime, but he questioned the approach favored by Mr. Trump. “This order would force all jurisdictions to accept a one-size-fits-all regime that might not be best for their particular jurisdictions,” he said.

He pointed to the church’s teaching on subsidiarity and said the administration’s changes in policy may curtail local efforts at fighting crime.

In a separate statement, Bishop Vasquez also condemned Mr. Trump’s pledge to move forward with plans to build a wall along the U.S.-Mexico border. The White House said that the wall, which by some estimates could cost between $15 to $40 billion to build, may be paid for by taxing goods imported from Mexico.

On Jan. 27, Reuters reported that Mr. Trump plans to sign an executive order to stop refugees from some Muslim-majority countries from entering the United States, making good on a campaign promise to restrict migration from places experiencing terrorism and war, such as Iraq, Afghanistan and Syria.

In 2015, when he was archbishop of Indianapolis, Cardinal Tobin defied a request by then-Gov. Mike Pence to stop the resettlement process of a Syrian family. Since then, he has spoken out repeatedly about the need for the United States to continue welcoming immigrants and refugees.

Cardinal Tobin said in his statement on Friday that the Archdiocese of Newark is “in the final steps of preparing to welcome 51 refugees from Syria, Iraq, Afghanistan and the Democratic Republic of the Congo.” He said they have all been vetted by federal authorities, a process that can take two years, and that the church authorities “hope to welcome others” in the future.

Denouncing “irrational fear, prejudice and persecution,” Cardinal Tobin said “confident kindness is what has made, and will continue to make, America great.”

What exactly would Cardinal Tobin, et al, recommend when cities give sanctuary to illegal immigrates who have committed felonies and where cities refuse to hand them over to Federal law enforcement officials when requested to do so. Take the case of Kate Steinle as one example. Instead of condemning and critizing Trump, why don't these Cardinals and Bishops make realistic and effective suggestions that will solve the broader problem?

When the Church enters the political discourse, it seems all we get is either silence or criticism from Bishops and Conferences of Bishops on many issues, but no practical solutions except by broad implication which usually means a shallow and abstract suggestion.

Let us suppose that Amnesty if offered to all un-Documented Immigrants
who have not committed serious crimes.

Let us suppose the border is no longer porous and so no one is paying
Coyotes to get across, no one is getting lost in the Desert and dying of
thirst.

Let us suppose that a National Work Registry is created so that all jobs
might be listed and if an employer can show that he does not have
sufficient workers he may apply to allow Immigrants to enter the
United States to work at those jobs - with wages being fully paid,
Safe Work environment provided.

The question is how do you implement such changes ?

Henry, Maybe a "Grow as you Go," or, a "Seed as you weed" in effect a carefully constructed "Know as you Grow" implementation program might work. I mean, Follow the route you suggested and watchfully remove, arrest, deport "contestants" who seriously fail, serious failure being criminal activity and if loss of life ensues, try that criminal- immigrant in a US Court and have him/her serve sentence here. Then deport for good that ex-convict, the exception being, evidence that absolute improbability of criminality will reoccur, allowing reconsideration of US residence. The US is an Immigrant Nation and to wall-out any in any way, would be to distort what the United States of America is meant to be. It is true, however that no matter how idealistic the USA is and has been through heritage, I think Augustine's advice must become as always a part of the equation, "Although charity is good, it must never be practiced contrary to sound judgment."

There was an exchange this week between Ed Henry and a immigration attorney named Francisco Hernandez on Sanctuary cities. Hernandez said there is no such thing as sanctuary cities and the Feds or Immigration authorities can come to any city in the United States and take someone away. There is nothing the cities can do about it.

This seems contrary to the current opinion in the news and so is this another case of fake news. I know there are lots of video clips of mayors talking about sanctuary cities but is it all posturing? We will find out in the next few months.

Apparently as soon as a city takes a finger print of a suspect the Feds will know about it since they have to access a federal data base to get the identity of the suspect. Under the Obama administration they did nothing about it much of the time but now it may be a different story.