Trump brought back the "Mexico City Policy." Here's what it means for U.S. foreign aid and abortion. 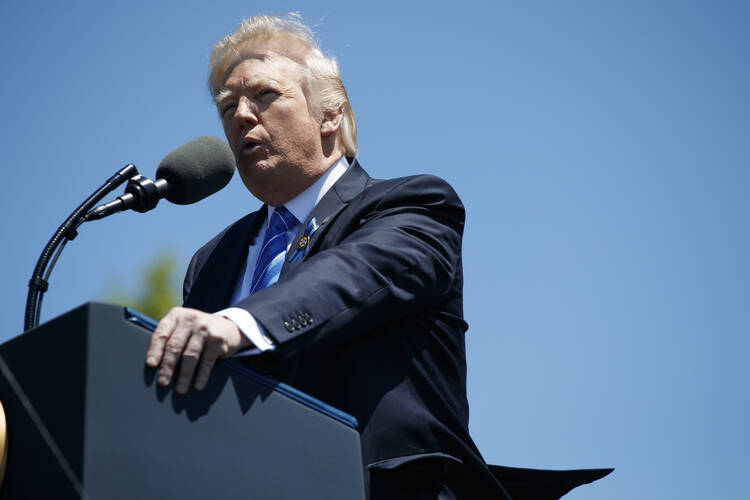 Reinstatement of the "Mexico City Policy," as provided for in President Donald Trump's Jan. 23 executive memorandum, took effect on May 15.

"(It) ensures that U.S. taxpayers will no longer subsidize foreign nongovernmental organizations that perform or promote abortion on demand," said the co-chair of the Congressional Pro-Life Caucus.

"This humane policy seeks to respect and protect the precious lives of unborn girls and boys from the violence of abortion," Smith, a Catholic, said in a statement. "The new policy doesn't cut global health assistance by so much as a penny."

The policy was first put in place by President Ronald Reagan in 1984. It was named for the city that hosted the U.N. International Conference on Population that year and where Reagan, then in his first term as president, unveiled it.

According to a fact sheet posted on the website of the U.S. State Department, Trump's memorandum directed the U.S. secretary of state "to implement a plan to extend the Mexico City Policy to 'global health assistance furnished by all departments or agencies.'"

It said Secretary of State Rex Tillerson approved a plan, giving the policy its new name and outlining how U.S. government departments and agencies will apply its provisions to foreign nongovernmental organizations that receive U.S. funding for global health assistance.

Under the expanded policy, "global health assistance" includes funding for international health programs, such as those for HIV/AIDS, maternal and child health, malaria, global health security, and family planning and reproductive health.

"The new policy establishes pro-child safeguards—benign, humane conditions—on about $8.8 billion in annual global health assistance funding appropriated to the U.S. Agency for International Development (USAID) and the Departments of State and Defense," Smith explained in a May 17 opinion piece published by The Daily Signal, a news website.

"The new pro-child, pro-woman safeguards do not reduce funding for global health assistance by so much as a dollar," Smith said, adding that Trump included three abortion exceptions in his memorandum for the policy—for rape, incest and to save the life of the mother.

"Nothing in the policy prevents foreign NGOs from treating injuries or illnesses that were caused by any abortion," the congressman added.

"For years, pro-abortion organizations have used U.S. taxpayer funds to weaken, undermine, or reverse pro-life laws in other nations and systematically destroy the precious lives of unborn children," Smith wrote. "Scores of countries throughout the world have been besieged by aggressive and well-funded campaigns to overturn their pro-life laws and policies."

He urged there be "a priority for programs that ensure adequate nutrition and supplementation for moms and children during the all-important first 1,000 days of life."

"No one is expendable or a throwaway. Every human life has infinite value. Birth is merely an event, not the beginning of the life of a child," Smith added.

Reagan's Mexico City Policy was in place until President Bill Clinton took office. He revoked it 1993, doing away with it so quickly following his inauguration that some participants in the March for Life, conducted two days after the inauguration, carried "Impeach Clinton" signs.

In 2001, President George W. Bush reinstated it in two days into his presidency, expanding it to include all voluntary family planning activities. President Barack Obama rescinded the policy Jan. 23, 2009.