Catholics are talking past each other in the Biden-Communion debate 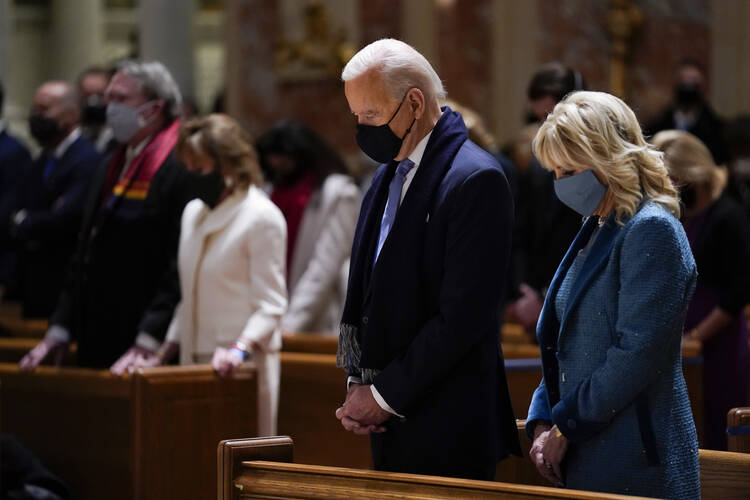 The Communion wars—an inadequate term for a much more complicated reality—are back. Contention among the bishops, both before and during their spring general assembly, held last week from June 16–18, over a proposed document on “Eucharistic consistency” has spilled over into the wider church and the media. Especially, the bishops were at odds over whether they needed to explicitly address the issue of a pro-choice president who is a churchgoing, Communion-receiving Catholic. A major source of acrimony in the debate has been that both sides have pastorally urgent concerns but unfortunately can tend to assume that the other side’s approach comes from prioritizing some other, non-pastoral goal.

As happens sometimes, the Scripture readings offered to us for use at Mass by the liturgical cycle seem providential for the moment. On June 20, the Sunday Gospel was the story of Jesus calming the storm. In the next day’s Gospel, Jesus warned against hypocrisy and admonished his disciples to remove the beam in their own eyes before attempting to help with the splinter in someone else’s.

Accusations and implications of hypocrisy have been easy to find on all sides of this controversy. Our ability to imagine the good intentions of other Catholics with whom we disagree has been in tragically short supply. In the spirit of yesterday’s Gospel then, I want to try to remove a beam that I have found in my own eye.

A few weeks ago, I wrote that no one can win the Communion wars over abortion and laid out a series of likely polticial scenarios that could follow a decision to bar President Biden from receiving the Eucharist. I argued that if the goal of such discipline was a greater recognition of the human dignity of the unborn, then the approach of barring politicians from Communion could not be expected to achieve that end.

Accusations and implications of hypocrisy have been easy to find on all sides of this controversy.

I was accused of hypocrisy by some for purportedly offering “cover” for pro-choice Catholic politicians. But others who engaged my piece more charitably helped me understand that I had missed—failed to fully imagine—a key motivation of those about whom I was writing. In brief, I was assuming that they were thinking of how stricter discipline around Communion could accomplish the good and desirable goal of moving politicians toward conversion of mind and heart to recognize abortion as unjust violence, and then explaining why, prudentially, I thought this was unlikely to work.

What I was missing, however, is that many who advocate stricter discipline are motivated not only by that hope for conversion of others but also by a passionate concern that the church’s own ecclesial communion has been harmed by a failure to respond to fellow Catholics publicly arguing against the legal protection of unborn life. To put this another way, their concern is not only (as I had assumed) how the hunger for Communion could help move hearts regarding abortion but also how the church’s own unity and the coherence of our eucharistic belief is harmed by an apparent lack of response to grave evil.

Of course, recognizing this concern does not entail immediately agreeing with it. I believe the church is responding to the injustice of abortion and the incoherence of pro-choice Catholic politicians. The Catholic Church is the most consistent pro-life voice in U.S. society and speaks about abortion regularly, including identifying opposition to it as a “pre-eminent priority.” Some Catholics, including politicians, certainly dissent from the church’s teaching on abortion, but I cannot think of any who are unaware of that teaching or who think the church would not want them to be pro-life rather than pro-choice. I interpret the current practice of not barring pro-choice politicians from receiving Communion not as indifference but as a prudent recognition of the limits of using ecclesial discipline in response to political actions. But even while disagreeing, I can now better understand how others could arrive at a different interpretation in good faith and out of charity.

In that spirit of charity and moving, I hope, from beam to splinter, I will also try to suggest how Catholics “on the other side,” who hope the bishops teach emphatically that pro-choice politicians must be barred from Communion, might better imagine the concerns of other Catholics who dread this outcome. It is uncharitable to assume that those who advocate stricter eucharistic discipline are motivated by animus toward Mr. Biden or are trying to push Catholics to support the Republican Party. By the same token, it is uncharitable to assume that anyone who is not ready to turn pro-choice politicians away from Communion is trying to prop up Democrats or to undermine the clarity of the church’s teaching on abortion from within because they don’t really believe it.

Neither assumption is warranted. Many Catholics are deeply concerned about how the church’s unity has been wounded by pro-choice Catholic politicians’ behaving as if support for legal abortion presented no problems. Many are also deeply concerned that the U.S. church’s focus on abortion has distorted the church’s teaching, leading many to hear bishops, priests and pro-life Catholic activists as speaking more in defense of the G.O.P. than the Gospel. And lest this concern be dismissed out of hand, remember that the 2020 election cycle was marked by vituperative attacks on the very idea that a Catholic could vote for, or even be, a Democrat.

For Catholics who think that stricter eucharistic discipline would only worsen the growing the partisan divide in the life of the church, the idea is not that the Eucharist makes no claims whatsoever on our political actions. Instead, seen from the proper perspective, the concern is that focusing more or less exclusively on whether or not a politician opposes legal abortion would set the bar for Communion too low. The Eucharist demands far more coherence from us in political life than just prioritizing the chance to overturn Roe v. Wade or voting for any law that restricts abortions. The pastoral concern is not that the church should avoid teaching that avid support for legal abortion is inconsistent with receiving Communion but that the church should avoid teaching, whether by omission or implication, that other forms of political support for injustice are somehow more acceptable.

There could be an argument, though not a persuasive one, that given the current platforms of the U.S. political parties, no Catholic politicians who are in good standing with their party should present themselves for Communion at all. But that outcome is even more outlandish than the possibility that barring pro-choice Catholic politicians from Communion will convince them to become pro-life. The pastoral concern, in light of that unlikeliness, is that using exclusion from Communion to highlight the moral incoherency of supporting abortion will only advance the false idea that political opposition to abortion is somehow morally obligatory to a degree that no other political consequences of Catholic teaching are.

Just as one can recognize good motives for wanting stricter eucharistic discipline without agreeing with the goal, good-faith disagreement with the above analysis is also possible. One could argue that political support for abortion is necessarily different in kind than other injustices because of how it rejects fundamental human dignity, thus resulting practically in greater scandal and disruption of communion, requiring a disciplinary response. But these are themselves pastoral and prudential questions, on which people who agree entirely on both the doctrine of the Eucharist and the moral teaching on abortion can disagree about how to proceed.

Crucially, people who disagree about the right course of action with respect to stricter eucharistic discipline can have both valid concerns about weakening the church’s teaching on the necessary connection between Eucharist and the moral commitment to seek justice, including in political life.

Catholics on both sides of this debate should be more willing to admit each other’s good will.

Catholics on both sides of this debate should be more willing to admit each other’s good will and readier to acknowledge how their own position could be a source of scandal for others. For those of us who are convinced that stricter discipline would only lead to partisan division, we should be willing to admit that prudent restraint from such discipline has not thus far helped much to change minds and hearts about abortion. For others, who are more willing to turn people away from Communion, perhaps they might address the ways the church’s focus on abortion has served as an excuse, often along partisan lines, for many pro-life politicians to ignore church teaching on a broad range of other moral questions.

Imagine if our dialogue and debate were about how to ameliorate those scandals, rather than an attempt to pretend that one or the other of them is so large as to crowd the other out of consideration.

In Monday’s Gospel, the Lectionary continues to be providential. In the verse immediately following his advice about beams and splinters, Jesus tells his disciples not to “give what is holy to dogs, or throw your pearls before swine.” It is easy to hear this as requiring a more stringent examination of conscience before approaching Communion; it is also possible to hear it as counsel to avoid the exploitation of true teaching for worldly ends or as a source of division. And if the church listens carefully, striving for the most charitable interpretation of those with whom we disagree, perhaps we might hear it as both.