The Biden Communion debate shows the exhaustion of the U.S. church 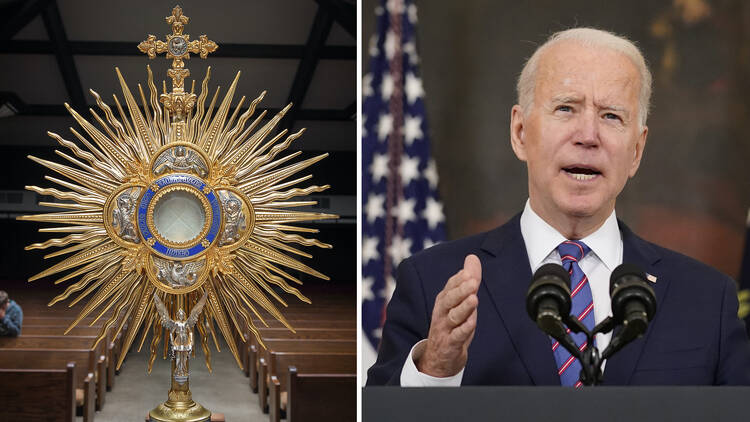 There is an ancient debate about the fall of Rome: Did it collapse because of internal enemies, or external ones?

It is a complex question. For Rome was indeed beset by invaders from all sides. But what made their invasion ultimately successful was decades if not centuries of decline and decadence. Rome did fall to invaders. But it fell to its own weakness first.

This is a question I think about when I contemplate the Catholic Church in the United States today.

One influential narrative about the state of the U.S. church argues that the divisions of U.S. politics have invaded the church. Specifically, the partisan polarization that has come to structure so much of U.S. life in recent decades has now made its way into the church.

There is no doubt truth in this argument, given the deep impact that partisan divisions have had on almost every aspect of life in the United States. And it is often true in subtle and far-reaching ways: from the influence of “Big Money” in the church to the idea that the church should be held accountable to the political ideals of democracy.

But the way we talk about this problem—that political dynamics are being imported into the church—often assumes that the problem is simply external. To return to the problem of Rome, however, is the problem the enemies at the gate, or the weak, enervated culture that offers no resistance to them and perhaps even welcomes disruption from outside?

There are always forces from the outside trying to influence the church’s life, and many of them are good. But because the U.S. church does not have the vibrancy to sustain its own culture, its own mission and its own sense of solidarity, it is particularly susceptible to those influences that would divert it from its mission.

Andy Smarick’s May 2 op-ed on the state of the Republican Party reminded me a little too much of the Catholic Church. Mr. Smarick argues that the party has a governance problem. The “GOP’s policy cupboards” are “mostly bare,” he writes, being reduced to an “aborted effort to replace Obamacare and a waiting-for-Godot infrastructure week.” Because of this exhaustion, “regardless of the question, they relied on the old standbys—tax cuts and deregulation—as their answers.”

The Biden Communion debate is more of an effect of our current state than it is a cause of our present dissensus.

Is the U.S. church very different? Across every issue, the flashpoints are predictable, the reactions are habitual, and the interactions ultimately sterile. There is little energy for new adaptation.

Note, for instance, the ongoing “Communion wars.” Seemingly nothing should be more at the heart of the church than a discussion of the Eucharist, summoning the best of Christians toward a recovery of our mission and identity as church. And yet most of the pieces written about this controversy have been painfully predictable. Catholics knew what they were going to read before they read them and knew whether they were going to agree with them from the byline.

Indeed, part of what is so exhausting about this debate is that it is not new: We have been debating this issue with little resolution since at least the 1980s. The battle lines have been drawn for decades, but no one is winning the war.

To put it another way: Whatever the novelty of a Catholic president, his ascendancy to the White House does not reveal a wholly new problem but rather exacerbates a problem that the U.S. church has been grappling with for decades. The Biden Communion debate is more of an effect of our current state than it is a cause of our present dissensus.

These are symptoms of exhaustion. Yes, this conflict, like others, involved frenetic activity, but that is only a sign of the sterility of the ritual. The ferocity of debates in the U.S. Catholic Church is a sign that we are desperately trapped in intellectual ruts. Our brains have become re-wired by years of futile conflict, and there is no obvious way out. We are simply habituated to react, and it would take tremendous energy and time to change, both of which we lack.

Partisan balkanization has affected every corner of U.S. society, from popular culture to sports, and so it is not surprising that it has come for the church. But the church is not just another sector of society. It is supposed to resist and transcend politics in a way that no other part of society can. Presumably, then, its politicization would entail something different from and deeper than that process in other spaces. Its politicization, in other words, would entail a deep failure on its own part.

But there is also an irony in the complaint. Decades after the Holocaust, when so many Christians scandalously failed to engage in politics in the defense of the innocent, especially the Jewish people, there is little fear of Christians eschewing the social dimensions of their faith.

Indeed, perhaps now is the time to clarify that, whatever the interconnections between Catholicism and political life, there is something proper to Catholicism that is lost when it is treated as simply continuous with political life. It is indeed a problem when the political and religious are confused.

A Church Humble and Poor

If this is true, then we do not just need complaints about the influence of politics. We need more attention to how we can renew the church. What we need to recover is an urgency to the questions: What is the church? What does it mean to be baptized? Who are we when we are acting in the unity of the Holy Spirit? How does it differ from our other social bonds?

Here we cannot ignore what our culture is crying for us to give it. We live in an anxious age, to borrow the title of Joseph Bottum’s brilliant book. It is also a fragmented, dissipated age, one in which many of the seemingly permanent features of U.S. culture are giving way.

It can be tempting for Catholics to think that Catholicism will be the new basis for American society, or at least a key part. I have my doubts.

But if we can be less concerned with occupying space and claiming power, then we will be better able to resist falling prey to the anxieties of our times. We will, further, be better placed to help our fellow Americans do the same.

But this requires humility and poverty. It requires the spiritual poverty to admit that we are tired, we are getting nowhere with our efforts to evangelize the culture and we need Christ’s help if we are going to be of any use to our country and our world.