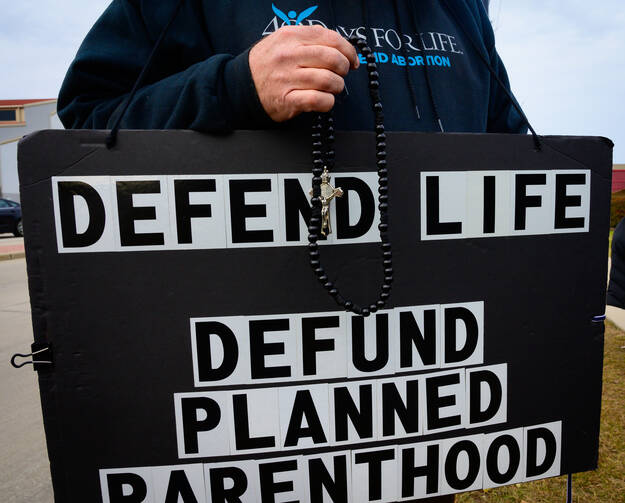 A 40 Days for Life vigil participant holds a rosary during the closing day of prayerful protests against abortion in Green Bay, Wis., Nov. 3, 2019. (CNS photo/Sam Lucero, The Compass)

Editor's note: This piece is part of a series on abortion and politics. For other views, read "Should abortion be the most important issue for Catholic voters? Here’s a better question" and "After 50 years, the U.S. bishops’ focus on abortion has done little to change hearts and minds."

When the U.S. Conference of Catholic Bishops held its annual fall meeting, the biggest news from its deliberations was the disagreement between several members over whether it is right to describe the issue of abortion as the “preeminent priority” for U.S. Catholics.

As bishops crafted an introductory letter to accompany “Forming Consciences for Faithful Citizenship,” the U.S.C.C.B.’s document on voting, Bishop Robert McElroy of San Diego spoke in favor of adding a paragraph to clarify that Pope Francis views a number of other social issues as holding the same moral importance as abortion.

Bishop McElroy said the inclusion of the word “preeminent” before the letter’s mention of abortion is at least discordant with and perhaps inconsistent with the pope’s teaching. “It is not Catholic teaching that abortion is the preeminent issue that we face in the world of Catholic social teaching,” he added.

Archbishop Charles Chaput of Philadelphia pushed back against this claim, even as he agreed with Bishop McElroy that the pope’s language could be added to the letter. “I am against anyone stating that our stating [abortion] is ‘preeminent’ is contrary to the teaching of the pope. That isn’t true,” he said, noting that it “sets up an artificial battle” between the U.S. bishops and Pope Francis.

Judging from voting patterns, a great number of U.S. Catholics believe that the evil of abortion is merely one social issue among many.

Though it is not clear how much weight U.S. Catholics give in practice to the bishops’ document as they make their choices at the ballot box, these disputes matter. Judging from voting patterns, a great number of Catholics in the United States believe something along the lines of what Bishop McElroy said: that the evil of abortion is merely one social issue among many, a moral problem to consider alongside the church’s teaching on a number of other evils.

To be sure, many Americans who describe themselves as Catholic no longer practice the faith—and thus are less likely to consider church teaching when they vote—but a large number of those who do consider church teaching choose to vote for Democratic candidates, even as those candidates have almost uniformly become dedicated to policies that preserve and expand access to abortion.

Even though, as Archbishop Chaput said, the church holds that all human lives have equal dignity—and that reality has various policy implications open to prudential disagreements among the faithful on issues like immigration and the climate—Catholic teaching has long held that the right to life is paramount. In other words, Catholics must prioritize the fact that every innocent human being has a right not to be killed, a truth that abortion directly attacks.

Catholics must prioritize the fact that every innocent human being has a right not to be killed, a truth that abortion directly attacks.

Here is how Pope St. John Paul II put it in his apostolic exhortation “Christifideles Laici” in 1988: “The common outcry, which is justly made on behalf of human rights—for example, the right to health, to home, to work, to family, to culture—is false and illusory if the right to life, the most basic and fundamental right and the condition for all other personal rights, is not defended with maximum determination.”

Though the pope goes on to discuss a number of issues that violate human dignity, his writing makes clear that church teaching places a particular emphasis on opposing abortion because the right to life at conception is a prerequisite for every other human right.

“Forming Consciences for Faithful Citizenship,” meanwhile, warns against a “moral equivalence that makes no ethical distinctions between different kinds of issues involving human life and dignity.

We are called to defend the least among us, and there is no more weak and defenseless population than unborn human beings.

“The direct and intentional destruction of innocent human life from the moment of conception until natural death is always wrong and is not just one issue among many. It must always be opposed,” the document says. Like “Christifideles Laici,” the bishops’ statement urges Catholics to take seriously “other serious threats to human life and dignity,” including war, environmental degradation and racism, but it carves out an unequivocal Catholic duty to oppose the direct killing of innocent human beings through abortion and euthanasia.

It would be a mistake to think that these statements are relevant only to forming one’s conscience when it comes to voting. Of course, Catholics can and must choose to defend innocent life, including the unborn, in a number of ways aside from how they cast their votes. But politics does matter, and the politicians that U.S. Catholics choose to support send a message about what we believe matters most.

“When a candidate supports abortion rights or assisted suicide the Catholic should have no doubt that this is opposed to the teaching of the church and should not vote for such a candidate,” C. C. Pecknold, a theology professor at The Catholic University of America, told Catholic News Agency before the 2016 presidential election.

If Catholics do not prioritize protecting human life at its very beginning in the womb and at its most vulnerable, our witness is weakened even if we go on to defend the dignity of human life at the margins in a variety of other circumstances. We are called to defend the least among us, and there is no more weak and defenseless population than unborn human beings.

This reality is not in tension with our call as Catholics to protect human life in a number of other ways, but especially considering that nearly one million unborn human beings are extinguished by abortion in the United States each year, we must prioritize using our votes and our voices to oppose that grave evil. 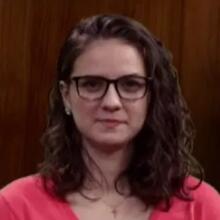 Alexandra DeSanctis is a staff writer for National Review. She was previously a William F. Buckley Fellow in Political Journalism with the National Review Institute and is a graduate of the University of Notre Dame.

@xan_desanctis
Show Comments ()
Join the conversation: Login or create an account
Before you can comment, you need to update your profile to include your first and last name, as required in our comments policy. Then reload this page and you'll be set up for commenting. Update your profile
Show Comments ()
Comments are automatically closed two weeks after an article's initial publication. See our comments policy for more.