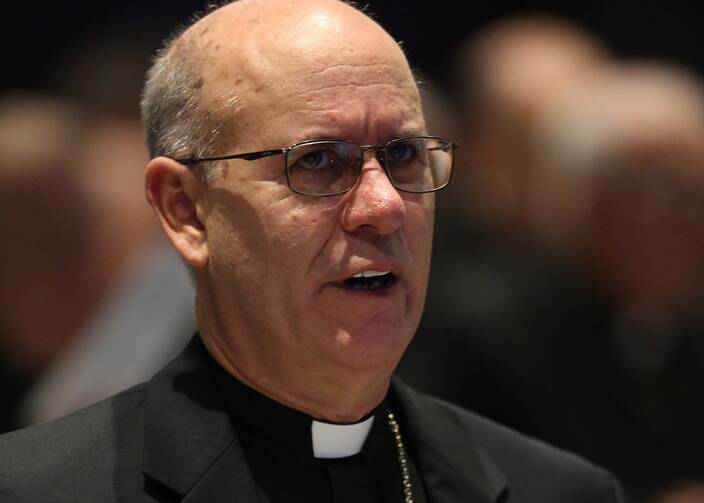 Editor’s note, June 18: This story has been updated.

Following a contentious debate, Catholic bishops voted overwhelmingly to move ahead with drafting a statement on the Eucharist, which some bishops said was urgently needed because two of the highest-ranking U.S. political leaders are Catholics who support abortion rights—while others warned such a move would politicize the Eucharist.

The vote, taken Thursday afternoon, was revealed Friday as 168 in favor, 55 against and six abstaining.

Following requests from several bishops who wished to meet in person before the statement is drafted, they are expected to gather in regional groupings to discuss the proposed statement before a drafting committee presents a proposal to the full body of bishops. Individual bishops will be allowed to suggest amendments before bishops vote on the document at their plenary session in November. In order for a statement to be adopted, two-thirds of U.S. bishops will need to vote in favor of the document, which will likely require a review by Vatican officials ahead of a vote.

The vote was more lopsided than the debate over the previous two days might have suggested.

The U.S. Catholic bishops spent more than two hours Thursday debating a controversial proposal to move forward with drafting a statement on the Eucharist that both supporters and critics said could be used to pressure bishops to deny Communion to pro-choice Catholic politicians. The bishops voted on the proposal on Thursday and results will be made public Friday.

Bishop Kevin Rhoades, the head of the U.S. Conference of Catholic Bishops doctrinal committee, which put forward the proposal of “drafting a formal statement on the meaning of the Eucharist in the life of the Church,” sought to assure bishops that the intention of the statement was not to single out pro-choice Catholic politicians. But at least a handful of bishops said they supported the proposal because they take issue with Catholic politicians who support abortion rights, including President Joe Biden, receiving Communion. Some said this confuses Catholics about church teaching. Other bishops warned that proceeding with the statement would cast bishops as partisan actors, and one bishop said he feared the document was being “rushed” in order to publish it before the midterm Congressional elections.

More than 40 bishops spoke, with many urging the conference to move ahead with drafting the document while others warned that a statement risked politicizing the Eucharist and went against guidance from Rome urging them to seek greater consensus before adopting a new statement.

“The Eucharist itself, which is the source and summit of the life of the church, will inevitably become a tool in the vicious partisan turmoil that roils our nation,” Bishop Robert McElroy of San Diego said, adding that if bishops move forward with drafting the document, that it would be “impossible to prevent the weaponization of the Eucharist in partisan battles.”

Several bishops alluded to President Biden, the nation’s second Catholic president, and his support for abortion rights as their motivation for supporting the drafting of the document.

“It seems to me this is an unprecedented situation in the country,” said Bishop Liam Cary, the head of the Diocese of Baker, Ore. “We've never had a situation like this where the executive is a Catholic president who is opposed to the teaching of the church.”

Archbishop Joseph Naumann, the head of the bishops’ pro-life committee, said he supported creating the statement because of public figures who “flaunt their Catholicity” and “love to describe themselves as devout Catholics” but who disagree with the church on abortion.

Bishop Rhoades has said several times that the committee’s proposal is to create a document that highlights the church’s full teaching on the Eucharist. An outline of the proposed statement suggests that a section will be aimed at “Catholics who are cultural, political, or parochial leaders,” but Bishop Rhoades said during a press conference following the debate that he could not answer the question of whether President Biden should be able to receive communion.

During the debate, which one bishop called the “most robust discussion” in recent years, some bishops blamed the media for framing the statement in political terms. But Bishop Robert Coerver, of the Diocese of Lubbock, Tex., said he believed politics is a motivating factor in pushing the document forward.

Bishop Robert Coerver, of the Diocese of Lubbock, Tex., said he believed politics is a motivating factor in pushing the document forward.

“There seems to be a rush to this, and I don't think the Holy Spirit traditionally works that quickly, and certainly the Catholic Church doesn't,” Bishop Coerver said. “And I can't help but wonder if the years 2022 and 2024 might be part of the rush, and I think we need to be real careful not to get embroiled in the political situation.”

In a press conference following the meeting, Bishop Rhoades said any future document should not be interpreted as political or targeting any individual believers, saying in response to a question that the politics of the document “never entered my mind or the committee’s.”

Several bishops said they feared moving ahead with adopting a statement on the Eucharist that included teaching about who is ineligible to receive communion would exacerbate divisions present in the U.S. church hierarchy. Several cardinals, including the archbishop who has authority over whether Mr. Biden is allowed to receive Communion when he is in the nation’s capital, urged caution.

“The choice before us, at this moment, is either we pursue a path of strengthening unity among ourselves or settle for creating a document that will not bring unity, but may very well further damage it,” said Cardinal Wilton Gregory of Washington, D.C, who has previously said he would not deny Communion to Mr. Biden.

Another cardinal warned that bishops risked being infected by the hyperpartisan political environment should they vote to adopt a document that could lead to the “categorical exclusion of Catholic political leaders” from the Eucharist “based on their public policy positions.”

Cardinal Joseph Tobin, the archbishop of Newark, said that moving ahead with the document could “thrust the bishops of our nation into the very heart of the toxic partisan strife which has distorted our own political culture and crippled meaningful dialogue.”

Some bishops worried that the document would be too narrowly focused.

Archbishop Salvatore Cordileone of San Francisco said he believed a future document about Communion must speak out strongly against abortion.

Bishop Rhoades said the document would not be “focusing on one issue” in terms of describing who is eligible to receive Communion. But Archbishop Salvatore Cordileone of San Francisco, who has argued Catholic politicians who support abortion rights should be barred from the Eucharist, said he believed a future document about Communion must speak out strongly against abortion.

“The eyes of the whole country are on us right now. If we fail now and do not act courageously in presenting church teaching,” Archbishop Salvatore Cordileone said, “how can we expect to be taken seriously when speaking on any other topic?”

Several bishops urged more dialogue and consultation before moving ahead with adopting a statement, which could be put up for a vote in November if bishops decide to move forward with the drafting process. Either way, some bishops worry the political climate has already colored public perception.

“I think the challenge that we’re facing today is the thing we cherish most as Catholics, as brother bishops, is Christ, is his church, is the Eucharist, the very presence that he left to nourish us,” said Archbishop Paul D. Etienne of Seattle. “This cherished source of our life and charity and unity is now enmeshed in a conversation about politics. And that's a very difficult place for us to be.”