Sick of the Bishops vs. Biden Controversy? Just log off and practice your faith like a Medieval peasant. 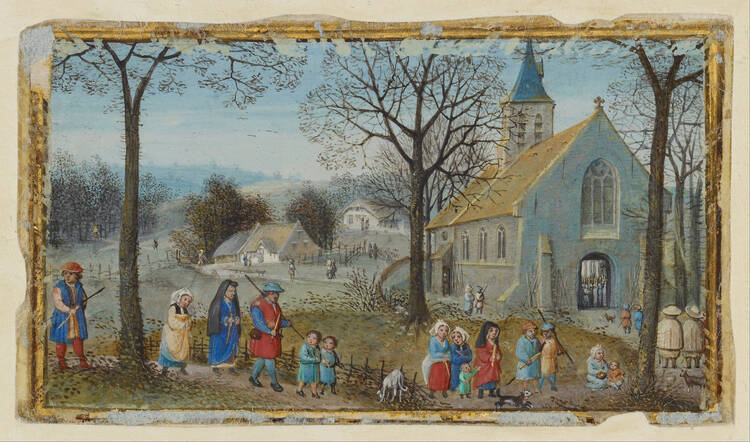 “Villagers on Their Way to Church,” Simon Bening, circa 1550 (Wikimedia Commons)

When I heard that the U.S. Conference of Catholic Bishops planned to speak out on eucharistic coherence, my eyes bugged out. They were going to talk about something American Catholics cared about, that is pertinent to our life and world today, that is inherently important? Our U.S.C.C.B.? There are a handful of individual bishops I admire, but as a whole, the U.S.C.C.B. can be depended on to put out documents called things like “De dispositione sellarum navalium” (loosely: “On Rearranging Deck Chairs”). But a statement about eucharistic coherence sounded like they got hold of something real, something we could really use right now. I decided to pay attention.

But I have been busy, and every time I opened Twitter, I realized that more of the “Biden-Communion-U.S.C.C.B.-will they-won’t-they” discourse had gone on without me. There had been another podcast, another bit of analysis, another impassioned personal essay and countless other hot takes, and I wasn’t keeping up. I feel a sickening tug of guilt, like when you didn’t do the homework and you thought you could skate by, but the teacher just announced that the thing you didn’t read is definitely going to be on the test.

If this is you, I am here to tell you: This will not be on the test.

I am not saying that the issues of who can and cannot, should and should not receive the Eucharist aren’t important or relevant. They’re important because the Eucharist is the source and summit of our faith, and if questions about it are not relevant to us, then what possibly could be?

Coherence is what we need, eucharistic and otherwise. This is not a coherent age. Retweets and ratios and podcasts and hot takes, yes. Coherence, no.

And it’s relevant because so many people do take their moral cues from public figures, for better or worse. Some Catholics took their cues from Donald J. Trump, and now some are taking their cues from President Joe Biden. It’s relevant because non-Catholics are learning about what the church considers important. It’s relevant because many of us are still raw after having peeled ourselves painfully away from what has become of conservatism. Many of us care fervently about protecting the lives of the unborn but also about protecting the lives of immigrants and people of color and prisoners and gay people, and we are tired of being told we have to choose one side or the other if we want to be on the side of Christ. Many of us care about the Real Presence, and because we love the Lord, we do not want to see his precious body and blood treated like a weapon or a bribe or a talking point.

Coherence is what we need, eucharistic and otherwise. This is not a coherent age. Retweets and ratios and podcasts and hot takes, yes. Banging gongs and clashing cymbals, yes. Coherence, no.

But coherence generally comes from simplicity. And simplicity comes when you cut away everything that doesn’t absolutely need to be there, even if it is interesting or titillating or gets you lots of clicks. So simplicity is what I’m going for. It is what I call “Medieval Peasanting.”

“Medieval Peasanting” means reminding myself that there once existed Catholics who couldn’t read or write and who never strayed more than 10 miles from the place where they were born.

“Medieval Peasanting” means reminding myself that there once existed Catholics who couldn’t read or write and who never strayed more than 10 miles from the place where they were born. They had some vague notion that the Holy Father lived in a far off place called Rome and they ought to pray for him every day. They said their prayers and did their best to obey the commandments, and when they failed, they repented. That is how they lived their faith. When they had the chance, they received Jesus in the Eucharist with glad hearts and gratitude and fear of the Lord. And so should I.

This mental image is, I realize, an idealization of medieval life. Medieval people, peasants and everyone else, were not automatically holy simpletons just because they didn’t have the internet. They were just as prone to vanity and pettiness and selfishness and idiotic mind games as I am. Where I have the distractions of trolls and Twitter ratios and doomscrolling, they had the distractions of toothaches and fleas and runaway infections. Just because they were disenfranchised, that doesn’t mean they were magically able to fix their eyes on the Lord with unwavering attention.

As I write, I am deciding whether or not to get my kids together this afternoon and get to confession or if we can put it off another week (and I know they’re watching me to see what I think is important). There is an open tab with an email from someone asking me for money to help pay a bill, and I haven’t responded yet. I have a copy of With God In Russia next to my bed, and it has a pristine spine. I am literally sitting under a crucifix as I type and choosing, moment to moment, whether to look at it or at my computer screen. These are the choices I make every day, every hour. This is where eucharistic coherence comes from. It comes from choice after choice about what I do with my life in the 167 hours every week that I’m not at Mass. How do I spend my time getting ready to receive the Lord?

There are lots of people who really do need to have these issues worked out. There are pastors who must decide what to do if a notorious and unrepentant sinner presents himself in the Communion line. There are good-hearted citizens who (God help them) are looking for guidance about how to best serve God and his people with their vote. There are Catholics who want to be pro-life, but they have seen such suffering they can’t quite bring themselves to say abortion is never the answer. There are Catholics who find two things abhorrent: abortion and the American pro-life movement.

And there are Catholics who don’t believe in the Real Presence, haven’t ever heard of it because nobody told them.

I am medieval peasanting it. I’m taking the brouhaha as my cue to simplify. I am not a bishop. I am not a president. I am a sinner, and I am unworthy that the Lord should enter under my roof.

And there are politicians and other prominent people who are pro-choice because they don’t want to think too hard about it but are also children of God who will one day die and find themselves alone before the Lord, and somebody somewhere at some point should have told them not to receive the Eucharist unless they’re in a state of grace—not because of the impression they make on everyone watching but because he that eateth and drinketh unworthily, eateth and drinketh damnation. There’s some coherence for you.

I have no idea what the U.S.C.C.B. will say in its document on the “meaning of the Eucharist in the life of the church.” The discourse surrounding what they might say has become so incredibly degraded, I have very low hopes that even the most powerful and forthright statement will do much good.

But that’s them. For me, I am still sitting here as I type, still under a crucifix. That’s where eucharistic coherence begins. This isn’t blog rhetoric. This is as real as it gets.

So I am medieval peasanting it. I’m taking the brouhaha as my cue to simplify. I am not a bishop. I am not a president. I am a sinner, and I am unworthy that the Lord should enter under my roof. Eucharistic coherence starts when I ask the Lord to say the word so that I may be healed.