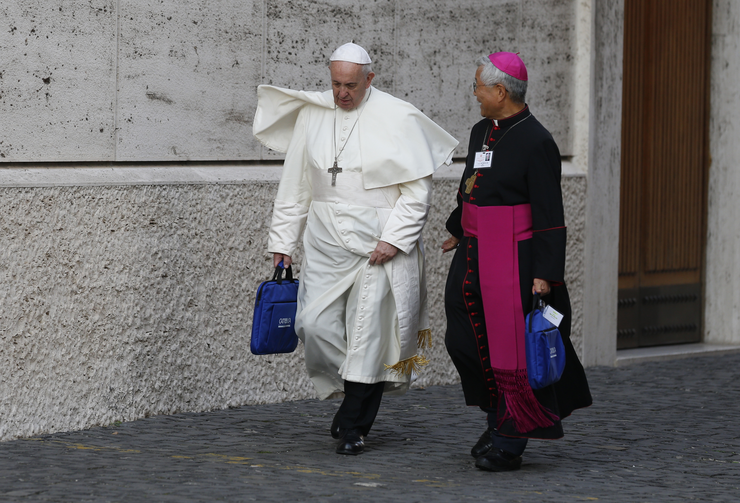 Pope Francis and Bishop Lazzaro You Heung-sik of Daejeon, South Korea, arrive for a session of the Synod of Bishops on young people, the faith and vocational discernment at the Vatican on Oct. 16, 2018. Pope Francis has named Bishop You as the new prefect of the Congregation for the Clergy. (CNS photo/Paul Haring)

Pope Francis has again looked to Asia as he continues to renew the top leadership of the Roman Curia, appointing the Korean bishop Lazzaro You Heung-sik as the new prefect of the Vatican’s Congregation for the Clergy.

Bishop You, 69, heads the diocese of Daejeon in South Korea. Francis sprung yet another major surprise by choosing him to head the congregation that has oversight over the more than 410,000 Catholic priests in the world and most of the world’s Catholic seminaries. Earlier this week, Pope Francis asked an Italian bishop, Egidio Miragoli, 65, to carry out a review of the Congregation for the Clergy.

Francis got to know Bishop You during his visit to South Korea in August 2014, when he went to Daejeon for the sixth Asian Youth Day. The bishop was his host and accompanied him throughout, including at the celebration of Mass in the Daejeon World Cup Stadium. Francis appointed him as a papal nominee to the Synod on Young People in October 2018. They met most recently in the Vatican on April 17, when the bishop came to Rome in a visit rumored to be related to the pope’s desire to visit North Korea. Francis also thanked him for the donation from the Daejeon diocese of $460,000 for Covid-19 vaccines for the developing world.

From the beginning of his pontificate, Francis has looked to Asia because he believes the future of the church is to be found on that continent.

The Vatican broke the news at midday on June 11. Bishop You will succeed the Italian cardinal Beniamino Stella, a former Holy See diplomat who has been prefect of the congregation since September 2013. He will reach the age of 80 in August, but will remain as in charge of the congregation until the Korean bishop takes over, the Vatican said. Bishop You is expected to be made a cardinal at the next consistory.

From the beginning of his pontificate, Francis has looked to Asia because he believes the future of the church is to be found on that continent, home to 60 percent of the world’s population. He has already made four visits to Asia—visiting Korea, Sri Lanka, the Philippines, Myanmar, Bangladesh and Japan—but had to cancel a fifth trip due to the Covid-19 pandemic. He also opened a dialogue with the Chinese government by agreeing to a provisional accord on the nomination of bishops in 2018. That agreement was extended for another two years in 2020.

During his time as archbishop of Buenos Aires, Francis learned much about Korea because of the presence there of a Catholic community of some 15,000 Koreans. He has always been fascinated by the Korean church because, unique in the history of evangelization, Christianity was introduced to Korea and preserved on the peninsula not by the work of missionaries but by the effort of lay people from within Korea itself.

Since 2020, Bishop You has been secretary of the Korean bishops’ conference.

Christianity first came to Korea when Korean scholars learned about it during their visits to Beijing and brought back from there some books on Christianity, including The True Meaning of the Lord of Heaven, written in 1603 by Matteo Ricci, S.J. the famous Jesuit missionary who brought Christianity to the court of the emperor of China. One of those Korean scholars, Yi Sung-Hun, later went to Beijing and asked to be baptized; he subsequently baptized other Koreans on his return home in 1784. The first Korean Catholic community had some 4,000 faithful when a Chinese priest, Zhu Mun-Mo, arrived from Beijing more than a decade later. He later died a martyr, one of more than 10,000 Korean martyrs recognized by the local church.

When Pope Francis addressed the Korean bishops during his 2014 visit, he insisted that the laity be given their proper role, remarking that in the church of the first Korean martyrs, “there was no temptation of clericalism; they were laypeople!”

Daejeon, about one hour from the South Korean capital of Seoul, is known as “the Silicon Valley of Korea.” It is the country’s fifth-largest metropolis, with a population of over 1.5 million people, and hosts 18 universities and many research centers. Bishop You was born in the diocese of Daejeon on November 17, 1951, in Nonsan-gun, in the province of Chungnam. He entered the Catholic University of Korea (which includes a major seminary) in Seoul at the age of 18. His bishop sent him to Rome in 1976 to study at the Pontifical Lateran University, and he was ordained a priest in 1979. He received a doctorate in dogmatic theology in 1983.

On his return to Korea in 1983 he worked as a priest at Daejeung-dong Cathedral in Daejeon. He was appointed director of the diocese’s Catholic education center in 1984 and pastoral director for the diocese in 1989. He served as spiritual director and professor at the Catholic university in Daejeon from 1994 and became president of the university in 1998, a post he held until Pope John Paul II named him coadjutor bishop of the Daejeon diocese in 2003.

As a member of the Catholic Bishops’ Conference of Korea, he has headed various commissions on matters ranging from pastoral care to Caritas Korea, social affairs, migrants and foreign residents, youth ministry, justice and peace, mission and the promotion of the beatification and canonization of the Korean martyrs. As bishop, he visited North Korea four times, and he also attended World Youth Day in Brazil, where he joined other bishops who, like him, were part of the Focolare movement. Since 2020, he has been secretary of the Korean bishops’ conference.

South Korea has a population of 52 million, 29 percent of whom are Christian (including 5.9 million Catholics in a church that is dynamic and missionary). The diocese of Daejeon has a population of some 3.9 million people, of whom 335,972 are Catholic. They are served by 338 diocesan priests in 143 parishes, assisted by 46 members of men’s religious institutes, 612 members of women’s institutes and 46 seminarians. The diocese is home to many of Korea’s most popular pilgrimage sites, because many of Korea’s martyrs died there during the persecution of the church at the beginning of the 19th century.