Vatican and China sign agreement on the appointment of bishops 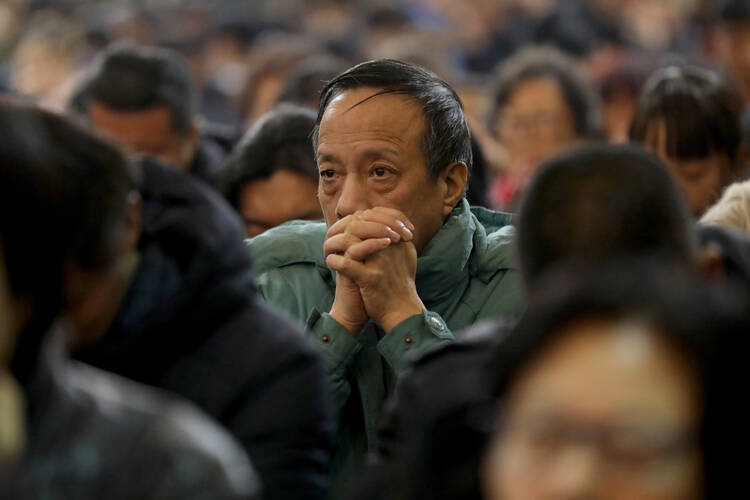 A man prays during Mass in 2017 at in the Church of the Immaculate Conception in Beijing. The long-awaited Vatican agreement with China only solves some of the issues of the church in China. (CNS photo/Wu Hong, EPA)

In a historic breakthrough, the Holy See has signed today, Sept. 22, “a provisional agreement” with China on the appointment of bishops.

In a statement issued at midday (Rome time), the Vatican said that the agreement was signed “within the framework of the contacts between the Holy See and the People’s Republic of China that have been underway for some time in order to discuss Church matters of common interest and to promote further understanding.”

It was signed at a meeting in Beijing between Msgr. Antoine Camilleri, Undersecretary for the Holy See’s Relations with States, and Mr. Wang Chao, Deputy Minister for Foreign Affairs of the People’s Republic of China, “respectively heads of the Vatican and Chinese delegations.”

It said the provisional agreement, “which is the fruit of a gradual and reciprocal rapprochement, has been agreed upon following a long process of careful negotiation and foresees the possibility of periodic reviews of its application.”

The Holy See and China have “the shared hope” that “this agreement may favor a fruitful and forward-looking process of institutional dialogue and may contribute positively to the life of the Catholic Church in China.

It said the agreement concerns “the nomination of Bishops, a question of great importance for the life of the Church, and creates the conditions for greater collaboration at the bilateral level.”

It said the Holy See and China have “the shared hope” that “this agreement may favor a fruitful and forward-looking process of institutional dialogue and may contribute positively to the life of the Catholic Church in China, to the common good of the Chinese people and to peace in the world.”

The agreement is the result of almost four decades of patient dialogue and often complex dialogue between the two sides that started before 1983. The dialogue went through many ups and downs. Much headway had been made under Benedict XVI but negotiations floundered in 2010 and did not start again until after Francis became pope in 2013. The Jesuit pope made a determined effort to break through the impasse and today his efforts, built on the culture of encounter not confrontation, have borne fruit.

It is the first time that the Holy See and China have signed an agreement since the Communists took power on Oct. 1, 1949.

It is the first time that the Holy See and China have signed an agreement since the Communists took power on Oct. 1, 1949, and it opens a new page in the history of relations between the most populous country in the world with over 1.3 billion people and the worldwide Catholic church with the same number of members.

Source: China and the Vatican to sign historic agreement by end of September
Gerard O’Connell

“This is not the end of a process. It’s the beginning. This has been about dialogue, patient listening on both sides even when people come from very different viewpoints,” the Director of the Holy See Press Office, Greg Burke, said.

He explained that “the objective of the accord is not political but pastoral allowing the faithful to have bishops that are in communion with Rome but at the same time recognized by the Chinese authorities.

More details are expected later today from the Vatican with comments by the cardinal Secretary of State, Pietro Parolin, who has overseen the negotiations.

He betrayed millions of faithful Chinese Catholics and worst, all those bishops, priests, and nuns who were executed or sent to the gulag for holding steadfast to their faith. St. Peter went back to Rome to died with his persecuted flock. This Pope abandon his.

He betrayed millions of faithful Chinese Catholics and worst, all those bishops, priests, and nuns who were executed or sent to the gulag for holding steadfast to their faith. St. Peter went back to Rome to died with his persecuted flock. This Pope abandon his.

The news of the agreement between the Vatican and China is huge. It is not based on a sudden decision; it has been decades in the making.
The late Chinese Jesuit Father George Bernard Wong (1918-2001), whom I knew very well, spend 25 years in prison and labor camp for his faith. While imprisoned, he baptized two other inmates, and in the labor camp he secretly celebrated the Eucharist with “cookies” (hosts) sent to him from Shanghai by his sister and wine provided by the camp doctor. Back in Shanghai, he celebrated Mass in the Underground Church. At the same time he taught English in the seminary of the Public Church, and he also served as secretary to the rector. He remained in close contact with (underground) Bishop Peter Joseph Fan and with (public) Bishop Aloysius Jin Luxian. Acknowledging the complexity of his situation, he made it very clear that there is one universal church. And yet he would remind people that Jesus calls us to read the signs of the time, adding that St. Ignatius built into Constitutions of the Society of Jesus an openness to change.
Observing first hand that multitudes of spiritually faithful were flocking to churches in China in his day, he never hesitated to repeat the words of Jesus who told Peter to feed his lambs. And he was deeply disturbed by those who demonstrated against the Public Church. Even then he was aware that the majority of public bishops were in secret union with Rome. “Our faith invites us to let Christ’s love heal the wounds we suffered rather than to foster alienation on behalf of the pope [Rome]… There is a Western saying…’to be more Catholic than the pope’. Let us not hinder the Holy Father but work with him toward reconciliation.”
I would add that in 2002 I met several priests and nuns who had suffered under Communism. They were residing in a retirement home that had once served as a nursing school run by a French religious orders. Properties that had been confiscated under Mao were being reopened as Catholic centers. Like Father Wong, these priests and nuns were not bitter. With broad smiles, they graciously embraced this visitor from abroad. And my graduate students at the university where I was teaching English knew the name of Jesuit missionary Matteo Ricci (Li Madou, 1552-1610) as he was cited in their math textbooks for his contributions to science.