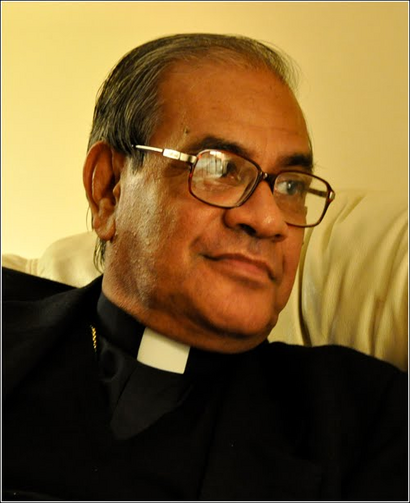 Pope Francis will arrive in Seoul, South Korea, on the morning of August 14. The following day he will travel to Daejeon, the country’s fifth largest metropolis about 167 km south of Seoul, for the sixth Asian Youth Day (AYD). There he will meet thousands of young Catholics from most of the countries of this vast continent where 60 percent of the world’s young people live.

To understand more about the AYD and its origins, I interviewed the  before he left for Daejeon. He is the Chairman of the Office for the Family and the Laity of the Federation of Asian Bishops’ Conferences’ (FABC). His office includes a Desk for Youth that oversees the organization of the Asian Youth Days. He has been invited by the Korean Bishops’ Conference to attend not only the AYD but also the other main events of the papal visit.

Could you explain the background to the Asian Youth Day? How did this event start?

Asian Youth Day (AYD) is a week long event hosted by the Federation of Asian Bishops’ Conferences (FABC) that brings together Catholic young people from all over Asia for fellowship and spiritual growth. It provides this through the numerous youth ministry programs held during the event.

AYD traces its roots back to the 1991 World Youth Day in Czestochowa, Poland, in which youth delegates from over 30 Asian countries participated.  There they expressed their hopes to have a way to network, exchange and organize activities with other Catholic youth in the continent of Asia.

A similar call for coordinated activity among Asian Catholic youth was reiterated during a youth consultation conference held in Bangkok, Thailand, in 1993.  The FABC responded positively to the pleas of the young people and established the Youth Desk under the Office for the Family and Laity so that youth leaders could begin sharing their faith by organizing activities among Catholic Asian youths.  The AYD is one of many programs organized by the FABC’s Youth Desk.

AYD is usually held one year after the World Youth Day.  Its aim is to carry forward and deepen in the Asian context the Message that the Holy Father gives at the WYD.

Why was the diocese of Daejeon in Korea chosen for the 2014 AYD?

This is the sixth AYD, and it is being held for the first time in South Korea.  The previous five AYDs were held at Hua Hin, Thailand in 1999; Taipei, Taiwan in 2001; Bangalore, India in 2003; Hong Kong, China in 2006; Imus, Philippines in 2009.  The FABC usually asks a local Bishops’ Conference whether it is willing to host the gathering and accordingly choice of the place is made.  The host country takes responsibility for the management of the event assisted by the Youth Desk of the FABC.  The Korean Church proposed Daejeon and the FABC accepted this. All this was arranged before the Pope took the happy decision to attend this AYD.

The diocese of Daejeon is home to over ten thousand faithful who followed the footsteps of Jesus to martyrdom during the long period of persecution under the Joseon dynasty.  It is home to the most pilgrimage sites in all of Korea.  So in remembrance of the sacrifices made by all these martyrs, the theme chosen for this year’s AYD is: “Asian Youth! Wake up! The Glory of the Martyrs Shines on You!”

It is common practice also that immediately after the AYD a meeting of Asian Youth Ministers is held. The Daejeon gathering will not be an exception; it too will include a three-day meeting of the Youth Coordinators of the National Bishops’ Conferences from the different countries of Asia, together with Bishops who are responsible for the National Youth Commissions.  They gather together to deepen their knowledge and understanding of the Pope’s message and to plan for the future programs of the Catholic Youth in Asia.

Who will attend this AYD meeting, and from how many countries?

This week-long and well-designed program is organized for only a select number of young people coming from approximately 30 countries and from the four regions of the continent: South Asia, Southeast Asia, East Asia and Central Asia.  Some 2000 young people have been invited from all these countries and the host country of Korea is given a quota of about 2000. However, for the concluding Youth Mass with the Holy Father on August 17 the local participants from Korea are likely to be very many more.

What is the aim of this AYD meeting?

In the light of the general theme already mentioned, there are three particular objectives: to remember the roots of our faith; to re-discover the faith values that we may have lost; and to walk together, in the world of today, as witnesses, with Jesus and the martyrs.

What will it mean to the young people and to Catholics in Asia that the Pope will be with them at Daejeon?

First of all, this is the first visit of Pope Francis to Asia.  In just over 500 days as pope he has already won the hearts of so many people throughout the world and also of so many in Asia.  His different interventions on the ecclesial matters and on social, economical and political matters have aroused great enthusiasm and hope among Asian Catholics as and the members of the other Christian denominations, as well as the followers  of other religions.

The Church in Asia will see and hear the Pope in their midst. It will certainly boost the faith of Catholics throughout Asia, and especially of Korean Catholics. The beatification of Martyrs will surely renew and strengthen the faithful who are in the frontline of evangelization.

During his visit here he is likely to confirm the triple dialogue that we are engaged in: dialogue with the poor, with the cultures and with the people of other religion. I feel sure that the work of evangelization and missionary spirit of the Church in Asia will be enhanced and, as a result of his coming here, there will be greater interest in having a personal relationship with Jesus who was born in Asia.

We are delighted that after the visit of Pope Francis to the World Youth Day in Brazil last year, he is now coming to this continental gathering of young representatives from many Asian countries that is being held in Korea. I am sure that being so close to the Spiritual head of the Catholic Church, the hearts of the young people at AYD will burn ardently with faith and the love of Jesus and will find greater expression in their lives.

How is the Pope seen in Bangladesh where you are archbishop?

Pope Francis has been very well received in Bangladesh and in Asia.  Thanks to the media ever since his election as pope, Asians have been looking at him with great interest and respect. They see him as Spiritual Leader of the whole world and they are deeply touched by his simplicity, his love and humility. They are greatly impressed by his love of the poor and the disabled, and see this as his outstanding characteristic. He is seen as bringing God’s mercy and love to people who are in greatest need.

When he expressed his concern and condolences after the tragic accident of Rana Plaza in Dhaka, on 24 April 2013, where about 1200 people were killed and some 3800 people were injured when a garment factory building collapsed, the Pope’s statement characterizing as “slavery” the situation of those workers drew the attention of all the people of Bangladesh.  They highly appreciated his words the, and his closeness to them.

What do you hope from his visit?

It’s clear the Pope’s visit will bring the solidarity of the Universal Church to the Churches in Asia.  It will be a pilgrimage of a Spiritual Leader who will be acceptable to all.  The Asian face of the Churches will be enhanced.  Evangelization and missionary spirit will be boosted.  Prophetic messages will be proclaimed to all.  The dialogue of love with the poor, with the cultures and the peoples of other faiths will receive added importance and priority.  It will be a confirmation of the faith of believers here in spite of the odds and difficulties that we face in Asia.  Moreover, the Holy Father will also bring to the attention of the Universal Church and the world community, the richness and the heritage of the faith, religion, culture and evangelical values of the Asian people.