Pope Presents Gospel as Antidote to Spirit of Despair in Korea 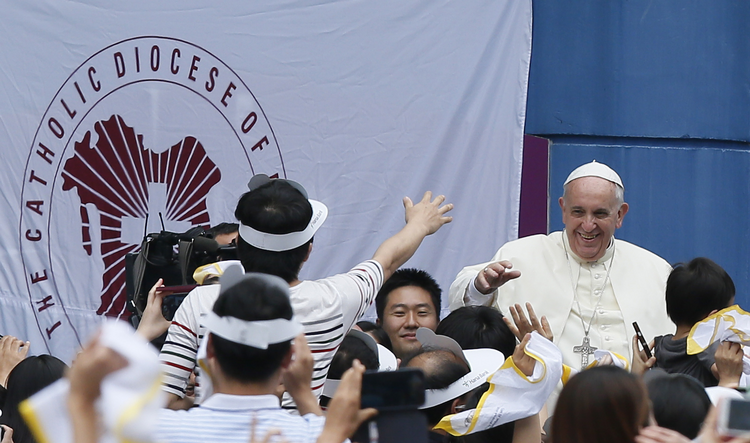 Pope Francis addressed the downside of the prosperous, highly competitive South Korean society on the second day of his visit here. He did so in words that went to the root of the concerns that are growing in the hearts of very many people here, both Christian and non, and especially of the young.

He opted to do so in his homily at his first public Mass on the Korean peninsula, celebrated before a crowd of 45,000 Korean Catholics in the World Cup Stadium at Daejeon, the country’s fifth largest metropolis that is often referred to as Asia’s Silicon Valley.

“Dear brothers and sisters, the hope held out by the Gospel, is the antidote to the spirit of despair that seems to grow like a cancer in societies which are outwardly affluent, yet often experience inner sadness and emptiness. Upon how many of our young has this despair taken its toll!” he told them.

He zoned in on the issue again both with reference to Korea and other prosperous Asian countries later that day, when he spoke at the shrine of the first Korean priest-martyr at Solmoe, about 30 miles from Daejeon, to 6,000 young people from 27 countries of this vast continent. He present the problem this way:

“How often the seeds of goodness and hope which we try to sow seem to be choked by weeds of selfishness, hostility and injustice, not only all around us, but also in our own hearts. We are troubled by the growing gap in our societies between rich and poor. We see signs of an idolatry of wealth, power and pleasure which come at a high cost to human lives. Closer to home, so many of our own friends and contemporaries, even in the midst of immense material prosperity, are suffering from spiritual poverty, loneliness and quiet despair. God seems to be removed from the picture. It is almost as though a spiritual desert is beginning to spread throughout our world. It affects the young too, robbing them of hope and even, in all too many cases, of life itself.”

To understand his words, and especially his reference to “the spirit of despair” that is spreading and is robbing the young of hope and even life itself, one has to understand the context. Fifty years ago South Korea was a very poor country, but today it is a prosperous, highly competitive, organized society. It is the fourth largest economy in Asia, has a low unemployment rate—less than 5 percent—and is ranked 15th in the World Economic Forum’s development index.

But there is a downside to all this. There is little or no social safety net for the poor, or ‘the relatively poor’ as some here prefer to call them, and the highly competitive nature of the society, with its strongly materialistic tendency, puts enormous stress on people. That stress is first experienced in school and never seems to let up in life. It makes many people unhappy and worried about their future. Failure to reach the goals set for one can lead to a sense of failure and, in extreme cases, to suicide. In actual fact South Korea now has the unenviable record of the highest suicide rate of any of the world’s developed economies. Suicide is also the number one cause of early death among the younger generations here.

Some say publicly that Korean society is in “crisis.” Bishop Lazzaro You Heung-sik, the Bishop of Daejeon used this word in his address, at the end of mass, thanking the pope for coming.

Several sources tell me that this crisis has come about because Korean society over the past 50 years has been built on the hierarchical structure of Confucianism, the competitiveness and individualism of capitalism, and in the process it has lost both the sense of responsibility (that was part of Confucianism) and the sense of community. The result is that people often feel themselves isolated individuals in a highly competitive society, and become very unhappy. The statistics suggest that young couples are not having children because of this oppressive climate, and so the birthrate is decreasing.

Speaking in Seoul’s Jesuit-run Sogang University on Jan. 16 of this year, Father Adolfo Nicolas, the head of the Jesuits, captured the national newspaper headlines when in his lecture he asked a fundamental question: “Would you say that South Korea today is a joyful country; that Koreans in general, especially our young people, are happy people?”

Pope Francis, who made a surprise visit to Sogang University on his return from Solmoe, is essentially asking the same question. He is raising it in a variety of ways during his five-day visit here. He touched on it in his speech at the Presidential Palace— “The Blue House”—when among other things, he called for an economy with a more human face, and urged Korea to become an international leader in solidarity.

He addressed the issue in a more personal way in his homily at Daejeon Stadium when he told his Catholic audience, during a deeply moving Eucharistic celebration, that “Christian freedom is more than liberation from sin. It is freedom for a new spiritual way of seeing earthly realities. It is the freedom to love God and our brothers and sisters with a pure heart, and to live a life of joyful hope for the coming of Christ’s Kingdom.”

On this day, the feast of the Assumption of Our Lady into heaven, which is celebrated here as Liberation Day (from the Japanese occupation that ended in 1945) Francis asked her to help Korean Christians to be faithful to the freedom they received at their baptism, “to guide the world in accordance with God’s plan” and to enable the church in this land “to be ever more fully a leaven of his Kingdom in the midst of Korean society.”

He called on Korea’s Christians, who together count for almost 30 percent of the population (Catholics are 10.7 percent), to become “a generous force for spiritual renewal at every level of society” and urged them “to combat the allure of a materialism that stifles authentic spiritual and cultural values and the spirit of unbridled competition which generates selfishness and strife.”

Pope Francis, who wants a poor Church for the poor—as he made clear also to the Korean bishops on the day he arrived here—called on Korea’s Christians to “reject inhumane economic models which create new forms of poverty and marginalize workers, and the culture of death which devalues the image of God, the God of life, and violates the dignity of every man, woman and child.”

He encouraged the country’s growing Catholic population to commit themselves to “a renewed conversion to the Word of God and a passionate concern for the poor, the needy and the more vulnerable in society.”

And recalling Mary’s assumption into glory, he told them “she shows that our hope is real.”

During his visit here, however, Francis is not only seeking through words to help Koreans come out of this profound spiritual crisis in their society, he is also indicating a way ahead by his own witness.

He is showing a style of humble, caring leadership and concern for the poor that is a challenge not only to Korean’s leaders but also to those in other countries in the continent. Two examples will suffice to make the point. He has opted to move around in a Kia, an economy car in Korea, totally rejecting the idea of a status car. Koreans know he did the same at Rio during World Youth Day (there he used a Fiat Idea), and that in Rome he uses a Ford Focus. They see here his genuine commitment to the poor and an authentic style of leadership, and reporters here tell me the Korean people really like this.

A second example came on Aug. 15, when Pope Francis went out of his way to meet some 30 relatives of the 300 young people (many of them school children) who drowned when the Se-Wol ferry sank in the sea last April. He labelled it as “this great national disaster and that is how most people here see it.

They consider the sinking of the ferry as a symbol of the national failure to take care of people in this highly prosperous and competitive Korean society. Francis, speaking in English at the end of a nationally televised mass, prayed that “this tragic event which has brought all Koreans together in grief” may move Koreans to a new “commitment to work together in solidarity for the common good.”