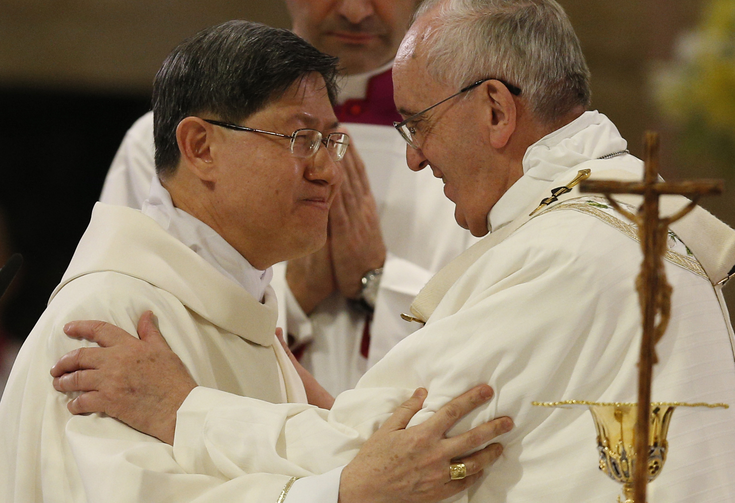 Pope Francis greets Cardinal Luis Antonio Tagle of Manila, Philippines, at the sign of peace while celebrating Mass at the city's Cathedral of the Immaculate Conception Jan. 16, 2015. (CNS photo/Paul Haring)

In a highly significant move, Pope Francis has appointed the Filipino Cardinal Luis Antonio Gokim Tagle, 62, archbishop of Manila, as prefect of the Congregation for the Evangelization of Peoples. The congregation oversees the work of the Catholic Church in most of the dioceses in Africa, Asia and Oceania, which is around one-third of the world’s 4,000 dioceses.

The Dec. 8 appointment reflects the pope’s deep desire for a missionary church. It is also a further expression of his outreach to Asia, a continent where two-thirds of the world’s population lives today. Francis has already visited the continent four times and plans to return to it again in 2020.

Cardinal Tagle is only the second Asian to hold that post, with the other being the Indian cardinal and Holy See diplomat, Ivan Dias who served from 2006 to 2011. He succeeds the Italian Cardinal Fernando Filoni, 73, who has been in that post since 2011, and whom Pope Francis has re-assigned to be Grand Master of the Equestrian Order of the Holy Sepulchre of Jerusalem. Cardinal Filoni succeeds the American Cardinal Edwin O’Brien in that role.

The congregation oversees the work of the Catholic Church in most of the dioceses in Africa, Asia and Oceania.

The Congregation for the Evangelization of Peoples is one of the big ones in the Roman Curia. It was originally called the Congregation for the Propagation of the Faith (Propaganda Fide) when it was first established by Pope Gregory XV in 1622, but Paul VI changed its name to the current one in 1967. Its task has always been “the transmission and dissemination of the faith throughout the whole world,” with specific responsibility for coordinating and guiding the church’s diverse missionary efforts and initiatives, as well as the promotion and formation of the local clergy and hierarchies, encouraging new missionary institutes and providing material assistance for the church’s missionary activity. It also plays a central role in the selection of candidates to be bishops in the dioceses under its remit and proposing their names to the pope.

When the congregation was first established 400 years ago, it was given responsibility for administering missions in the territories “discovered” by the Spanish and Portuguese conquistadors. Some church people outside of Europe say its ecclesiology or ecclesial vision is to an extent still influenced by that history which sees Rome and Christian Europe at the center, outside of which are the “territories of Christianity,” and the peripheries to be evangelized. They say it has yet to fully absorb the ecclesiological vision of the Second Vatican Council, something that Pope Francis will certainly want to ensure, and his appointment of Cardinal Tagle can be seen in this light too.

The Filipino cardinal arrives in Rome as Pope Francis’ reform of the Roman Curia is on the threshold of completion and will, it seems, include the incorporation of the Pontifical Council for the New Evangelization into the Congregation for the Evangelization of Peoples.

He was born into a Catholic family in Manila in 1957 to a Filipino father and a mother of Chinese origin. Known to many by the nick-name “Chito,” he studied philosophy and theology in the capital city of the Philippines. After his priestly ordination, he was sent to do further studies at the Catholic University in Washington D.C., where he earned a doctoral degree in theology. On his return to the Philippines, he was appointed rector of the seminary in his home diocese of Imus, where he also taught theology.

In 2002, St. John Paul II appointed him as bishop of Imus, a diocese of 2.6 million Catholics, with 102 priests, various Religious communities and—Cardinal Tagle later said—“very many good laypeople” as co-workers.

The Filipino cardinal has impressed bishops from around the world with his joy, insightfulness and vision.

A star communicator, at that time he hosted hour-long television programs in the Philippines during which he shared insights on the Scripture readings for Mass and answers viewers’ questions on the Bible and faith. Then, beginning in 2007, he hosted the talk show “Light Talk,” for which he often invited professionals and young people to discuss current issues. He presented the church’s perspective.

In 2011, Pope Benedict XVI appointed the then 54-year old charismatic churchman as archbishop and spiritual leader of 2.8 million Catholics in Manila, the capital city of this south-east Asian country with more than 7000 islands which today has a population of 109 million people, the overwhelming majority of whom are Catholic. Benedict created him cardinal in 2012 during the last consistory of his pontificate, enabling him to participate in the 2013 conclave that elected Pope Francis.

The Filipino cardinal has impressed bishops from around the world with his joy, insightfulness and vision and on three successive synods of bishops he was elected to the council, which is usually a strong signal that he is highly esteemed by his peers.

Cardinal Tagle is very close to Pope Francis and fully shares his synodal vision of a missionary church and his concern for the poor, which is also reflected in his own lifestyle. That closeness was visible when Francis visited the Philippines, Jan. 15-19, 2015, and celebrated Mass for the victims of Typhoon Yolanda in Tacloban and then in Manila attended by some six million people, the largest number ever at a papal Mass. It was particularly evident when Francis celebrated Mass in Manila cathedral.

Since May of 2015, Cardinal Tagle has been president of Caritas Internationalis, a confederation of 165 Catholic relief, development and social service organizations operating in more than 200 countries and territories worldwide. In that role he has traveled widely across the globe, visiting some of the areas with great humanitarian crises. It is not clear if he will continue in that role give his new responsibilities.

The appointment of Cardinal Tagle is the second major nomination to the Roman Curia made by Pope Francis in the last quarter of this year. On Nov. 14, he named the Spanish Jesuit Juan Antonio Guerrero Alves as the new prefect of the Secretariat for the Economy, and he is expected to make other top-level Vatican appointments in the coming months.