Explainer: Who are the Kings Bay Plowshares 7, the Catholics convicted of protesting nuclear weapons? 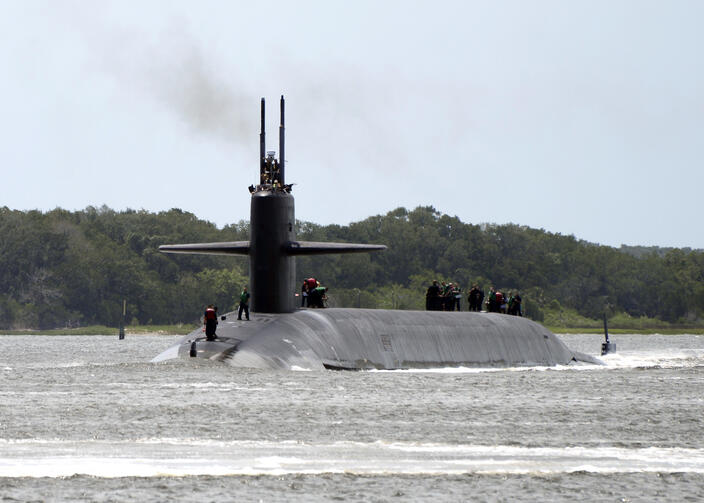 The Ohio-class ballistic-missile submarine USS Maryland (SSBN 738), Blue crew, returns to homeport at Naval Submarine Base Kings Bay, Ga., following a strategic deterrence patrol. Maryland is one of five ballistic-missile submarines stationed at the base and is capable of carrying up to 20 submarine-launched ballistic missiles with multiple warheads. (U.S. Navy photo by Mass Communication Specialist 1st Class Ashley Berumen/Released)

As reported in America, the “Kings Bay Plowshares 7” defendants, arrested for acts of civil disobedience intended to protest the nation’s continuing nuclear weapons program, were found guilty on Oct. 24 of four separate federal crimes. The activists are grandparents, parents and caregivers.

Several of the Kings Bay Plowshares 7, including Dorothy Day’s granddaughter, Martha Hennessy, are members of Catholic Worker communities. Clare Grady, who describes her Plowshares activism as a sacramental response to God’s call to disarm, was arrested and convicted in 1983 for her participation in a Plowshares protest at Griffiss Air Force Base. Elizabeth McAlister, a co-defendant to Ms. Grady in both actions, has been an anti-war activist since she and her late husband, Philip Berrigan, destroyed draft cards during the Vietnam War.

Steve Kelly, S.J., the only Catholic priest among the seven, has spent a lifetime living and working with impoverished people. He has stated, “We cannot be fully human while one nuclear weapon exists,” and he sees the symbolic destruction of nuclear weapons as “showing a way out of the escalation.” The activists selected the 50th anniversary of Dr. Martin Luther King Jr.’s assassination as the date for their protest because they agree with Dr. King that the evils of racism, extreme materialism and militarism are inexorably linked.

The obvious religious motivation of the Plowshares activists did not insulate them from criminal prosecution. The First Amendment prohibits the government from applying different rules to religious believers, but the Plowshares defendants were treated the same as any other intruder on government property.

Nor were they offered any protection by the Religious Freedom Restoration Act, which has insulated religious actors under other circumstances—for example, exempting employers from the contraceptive mandate of the Affordable Care Act. The R.F.R.A. does permit the enforcement of laws that substantially burden religious freedom when the government has a compelling interest and has chosen the least restrictive means to protect that interest.

The obvious religious motivation of the Plowshares activists did not insulate them from criminal prosecution. They were treated the same as any other intruder on government property.

The trial court rejected the defendants’ pretrial motions to dismiss the charges on R.F.R.A. grounds because the government has a compelling interest in protecting its property from destruction and its military bases from unauthorized intrusion. Once the trial court ruled that the First Amendment and R.F.R.A. did not require dismissal of the charges, it precluded the jury from hearing the defendants’ religious freedom defense. Conviction became inevitable. What remains to be seen is whether the defendants’ faith will affect their sentences.

Brief history of federal sentencing
Congress determines the sentencing options for every federal crime. Our earliest federal laws imposed fixed sentences for most crimes. In the 1800s, legislators determined “the punishment should fit the offender, and not merely the crime.”

Specific terms of imprisonment were replaced with indeterminate sentences, with set maximums and sometimes mandatory minimums, terms and the possibility of parole (early release) based on an inmate’s rehabilitation. This system remained in place for a century despite serious disparities in sentences, wherein individuals who engaged in the same criminal activity would receive significantly different punishments.

In 1984, Congress created the U.S. Sentencing Commission and directed it to create fact-based guidelines that, when mandatorily applied, would result in greater sentencing uniformity. In 2005, the Supreme Court struck down the mandatory application of these guidelines, but judges who eschew them must explain their decisions and are subject to reversal under an abuse of discretion standard.

The guidelines have been criticized as a factor leading to mass incarceration, and in 2018 Congress passed the First Step Act, designed to facilitate “reentry” into communities, reduce “enhanced mandatory minimums” and expand the “safety valve” to eliminate mandatory minimums for more nonviolent drug offenders.

Imposition of a Sentence
Federal penalties include restitution, fines, probation and imprisonment. The specific crimes committed determine the range of penalties that may be imposed. The Kings Bay Plowshares 7 entered a secure U.S. naval submarine base by cutting through a padlock on the perimeter fence gate. The group then dispersed to separate sites.

“We cannot be fully human while one nuclear weapon exists.”

Three protestors cut through chain link and concertina wire fencing to gain access to a restricted area where they believed nuclear weapons were stored. They strung up crime scene tape and banners reading, “The Ultimate Logic of Trident is Omnicide,” “Resist Idolatry,” “Love Your Enemies,” and “Disarm.” The others pried off a sign on an administration building, spray painted “Abolish nukes now” in its place and hammered at the mock missiles on display.

Typically, “[m]ultiple terms of imprisonment imposed at the same time run concurrently,” but a judge may order consecutive terms in accordance with factors that control all federal sentencing decisions. These include the seriousness of the crime, the need to deter future crimes, the defendant’s personal history, cooperation with the prosecution, family or health-related concerns and an analysis of the defendant’s role in the crime—that is, were they among the masterminds or were they low-level accomplices?

The sentencing process typically begins when a judge directs the U.S. Probation Office to prepare a presentence report that includes information necessary to apply the required sentencing factors and specifics of the defendant’s actions. This is important because one crime—destruction of government property, for example—can encompass everything from the successful destruction of an entire building to the attempt to cause minor damage to a single object. A person who causes millions of dollars worth of damage should face a stiffer penalty than someone who tries, but does not even succeed, to vandalize an inexpensive piece of equipment.

The sentencing guidelines provide mathematical tables that combine the seriousness of the crime, indicated by the “offense level,” with the defendant’s criminal history to determine a recommended sentence. Guideline §2B1.1, for example, lists destruction of government property as having a base offense level of seven, but if the property damage exceeds $6,500, the offense level is increased incrementally to a maximum of 30 additional points. Evidence at trial indicated that the Kings Bay Plowshares 7 caused $30,000 worth of damage, which would add four offense level points.

Additional upward and downward variances and departures from the guidelines are considered before a final sentence is determined at the sentencing hearing. Unless the relevant statute or the judge specifies a mandatory minimum, parole from prison is possible after one-third of a sentence is served.

The sentencing guidelines will indicate different sentences for each of the Kings Bay Plowshares 7 because each engaged in slightly different conduct and they have different personal and criminal backgrounds. Federal Rule of Criminal Procedure 32 (a) guarantees that the prosecution, victim and defendant have an opportunity to speak at the sentencing hearing in order to influence the judge’s final decision.

The Kings Bay Plowshares 7 will be permitted to use this opportunity to explain their action as a religiously motivated protest against nuclear weapons. Although they each could be sentenced to more than 20 years imprisonment, the sentencing guideline recommendations likely will range from eight to 33 months of incarceration and/or conditional probation, which includes intermittent confinement, community confinement or home detention.

The ultimate decision, subject only to appellate review for abuse of discretion, is in the hands of the trial court judge, Lisa G. Wood, a former federal prosecutor. She could view religious motivation as a mitigating factor because the defendants waited peacefully to be arrested and did not have malicious intent—or as an aggravating factor because lenient sentences might encourage them and others to commit similar crimes.

These Catholics broke into a nuclear base. Now they’re asking a judge to drop the charges.
Yonat Shimron - Religion News Service

In 2013, the judge who sentenced three Transform Now Plowshares defendants, two Army veterans and a Catholic nun who destroyed $8,000 worth of government property, gave consideration to their nonviolent motives but still sentenced them to 65 months and 35 months, respectively. Their sentence, however, included punishment for the more serious crime of sabotage; that conviction was later vacated on appeal and their sentence reduced to time served.

In March 2019, defendants from the pro-immigrant group No More Deaths, who committed misdemeanors when they left water for immigrants in a protected wilderness area, received a more lenient sentence than requested by the prosecution; they were sentenced to pay $250 in fines and serve 15 months of unsupervised probation.

Sentencing usually occurs within a few months of conviction, but the Kings Bay Plowshares 7 defendants recently filed post-trial motions that could delay their sentencing.

The federal sentencing guidelines do not impart the wisdom of King Solomon on judges; they merely attempt to rationalize sentencing decisions within legislatively created parameters. Whether judges remain within those guidelines depends on variances in prosecutorial discretion (aggressive prosecutors charge the most serious crimes possible, which increases the likelihood of pleas to unprovable charges) and judicial temperament.

In short, each federal judge decides whether the quality of mercy is strained by the sentencing guidelines.