How long will the Latino community have to wait for a cardinal in the United States? 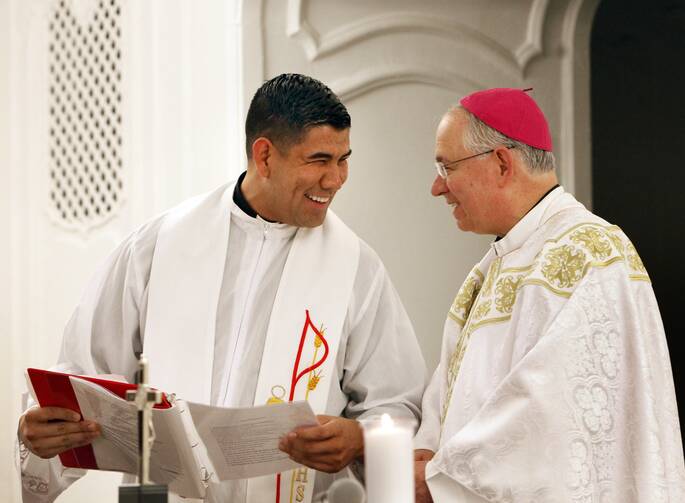 Some U.S. Catholics are calling that disparity to mind after Pope Francis named 13 new cardinals on Sunday. Among those named is Archbishop Wilton Gregory of Washington, D.C., who will become the first Black cardinal in U.S. history.

“It is so good that the pope will have this close advisor who knows the Black Catholic experience,” said Hosffman Ospino, an associate professor of Hispanic ministry and religious education at Boston College. He said the church should be celebrating someone who comes from the margins. Archbishop Gregory, Mr. Ospino added, has also developed a profound relationship with the Latinos he has served, especially in Atlanta.

[Related: In a year full of protests against racism, the first Black U.S. Cardinal comes at a historic moment]

Still, while not wanting to take anything away from the gift of these cardinals, why are we still waiting for the first Latin American pope to name a Latino cardinal in the United States?

By some estimates, 40 to 45 percent of U.S. Catholics are Latino, including more than 60 percent of Catholics under the age of 18. How many U.S. cardinals are Latino? Zero.

There are 27 active Latino bishops in the United States. Archbishop José H. Gomez of Los Angeles, the president of the U.S. Conference of Catholic Bishops, is perhaps the most prominent. (I used to work for Archbishop Gomez as editor in chief of Angelus News and Vida Nueva.)

Last year, John Allen wrote at Crux that naming Archbishop Gomez a cardinal could be seen as “a nod to the burgeoning Hispanic wing of the U.S. Church, as well as a way of putting an exclamation point on Gomez’s passionate advocacy for immigrant rights.”

“Not only is there a huge portion of the church that is Latino, but for at least the last 15 years, many key leadership positions have been held by Latinos,” said Andrew Rivas, the executive director of the California Catholic Conference.

It is impossible to list all of the Latino bishops in the United States and their accomplishments, but Archbishop Nelson Pérez of Philadelphia is certainly one that comes to mind. The son of Cuban exiles leads an archdiocese that, until 2011, was led by a cardinal. Archbishop Gustavo García-Siller of San Antonio, Tex., is another national leader who, like Archbishop Pérez, played a role in the V Encuentro. He spoke out forcefully against the Trump administration’s zero-tolerance policy. Bishop Jaime Soto of Sacramento, who led the California Catholic Conference for six years, is yet another Latino leader.

Mr. Ospino thought Bishop Daniel Flores of Brownsville, Tex., would be an interesting choice. While he does not occupy a traditional cardinal seat, a consideration that does not seem to influence Pope Francis in his cardinal appointments, Bishop Flores does lead a diocese on the U.S.-Mexico border. “It could be seen as an affirmation of one of the poorest dioceses in the United States,” Mr. Ospino said.

“It would be a huge feeling of recognition for the Latino community for one of these bishops to be named a cardinal,” Mr. Rivas said. “Afterall, cardinals get to vote for a pope.”

“It would be a huge feeling of recognition for the Latino community for one of these bishops to be named a cardinal,” Mr. Rivas said. “Afterall, cardinals get to vote for a pope.”

But why just one? Today, there are 15 U.S. cardinals, eight of whom are eligible to vote for the next pope. If the goal is to reflect the current makeup of the Catholic Church in the United States, three or four of the eight voting cardinals should be Latino. Ideally, they would come from the South and West of the United States, where the majority of U.S. Catholics live.

If Francis wanted to name a few Latino cardinals in the United States, he does have options.

The College of Cardinals is not the only place where U.S. Latinos are underrepresented. In their annual report to the U.S.C.C.B., Georgetown’s Center for Applied Research in the Apostolate reported that 16 percent of this year’s ordinands are Hispanic. That is a low number given that more than half of Catholics under 30 are Latino.

“We still have some dioceses operating like Latinos are visitors,” he said. A Latino cardinal would help Latino Catholics no longer be invisible in many places, recognizing that this community, along with others, is building the future of the church in the United States, he said.

“Having a Latino cardinal would be an affirmation of the demographics. Ultimately it is an affirmation that Latinos have a lot to say about what it means to be Catholic in this part of the world,” Mr. Ospino said. “But if we want to think of future cardinals and bishops down the road, we need to set the foundation.”

[Read this next: How Latino Catholics are grappling with their own history of racism]