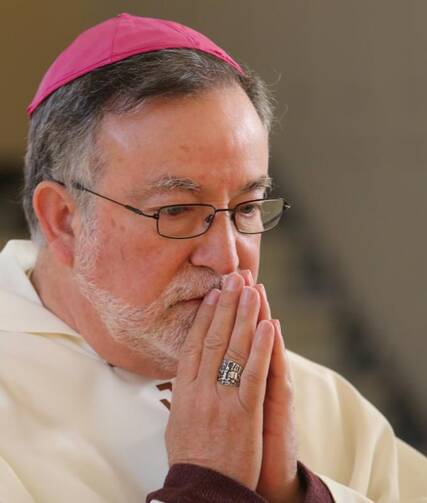 SACRAMENTO, Calif. (CNS) -- By defacing and toppling a statue of St. Junipero Serra in Sacramento, protesters may have meant "to draw attention to the sorrowful, angry memories over California's past," but "this act of vandalism does little to build the future," Bishop Jaime Soto said July 5.

The bishop, who heads the Sacramento Diocese, made the comments after the statue on the grounds of the California Capitol in Capitol Park was torn down by a group of demonstrators late July 4.

"There is no question that California's indigenous people endured great suffering during the colonial period and then later faced the horror of government-sanctioned genocide under the nascent state of California," Bishop Soto said. "This legacy is heartbreaking."

However, he continued, "it is also true that while Father Serra worked under this colonial system, he denounced its evils and worked to protect the dignity of native peoples."

"His holiness as a missionary should not be measured by his own failures to stop the exploitation or even his own personal faults," the bishop added.

Bishop Soto's remarks echoed those of Los Angeles Archbishop Jose H. Gomez in a column he wrote for the July 1 feast day of St. Junipero Serra. The Sacramento bishop also referred to the column, published June 29 in Angelus, the online news platform of the Los Angeles Archdiocese.

"The exploitation of America's first peoples, the destruction of their ancient civilizations, is a historic tragedy," Archbishop Gomez wrote. "Crimes committed against their ancestors continue to shape the lives and futures of native peoples today. Generations have passed and our country still has not done enough to make things right."

"I understand the deep pain being expressed by some native peoples in California. But I also believe Fray Junipero is a saint for our times, the spiritual founder of Los Angeles, a champion of human rights, and this country's first Hispanic saint," the archbishop said, noting that he was "privileged" to concelebrate the Spanish Franciscan's canonization Mass with Pope Francis in 2015 during the pontiff's pastoral visit to Washington.

Known for spreading the Gospel in the New World during the 18th century, the Franciscan priest landed in Mexico, then made his way on foot up the coast of Mexico and to California, where he established a chain of missions that are now the names of well-known cities such as San Diego, San Francisco and Santa Barbara.

He was the first president of the California mission system, and personally founded nine of the state's 21 missions. It is estimated that during his ministry, St. Junipero Serra baptized about 6,000 native people.

In 2015, some people objected to the canonization of the Spaniard, like critics did of his beatification in 1988, because of questions raised about how Father Serra allegedly treated the native peoples of California and about the impact of Spanish colonization on native peoples throughout the Americas.

"Understanding the efforts of Father Serra to bring light into the bitter, bleak darkness of colonial ambition is the difficult task of history," Bishop Soto said in his statement. "So is the present arduous work to chart the future with hope.

"The strenuous labor of overcoming the plague of racism should not be toppled by nocturnal looting," he continued. "Dialogue should not abdicate to vandalism. Nor should these unnerving episodes distract us from the duties of justice and charity upon which a better California can be built."

The Fourth of July weekend, Bishop Soto said, was a reminder to the nation "our common cause is to be a living monument to those words carved into the American soul, 'We hold these truths to be self-evident, that all men are created equal, that they are endowed by their Creator with certain unalienable rights, that among these are life, liberty and the pursuit of happiness.'"

"All monuments are imperfect as are our efforts to live up to America's founding ideals," he said. "The primary task is to build up our community, not tear it down."